Animoto Hits $30m in Revenues, You Won’t Believe How Much Revenue They Add Monthly

by Alan
in Uncategorized
11 min read
0

Nothing makes founders feel more ancient than asking when their companies had been founded. When Animoto was started in 2007, the iPhone had just come out, and MySpace was still more popular than Facebook.

Back in 2007 when Animoto was just launched, 3 out of its 4 members still had day jobs. Four tech-loving founders gave themselves a year to prove this technology to potential early adopters. The original idea was quite different from what Animoto is today. 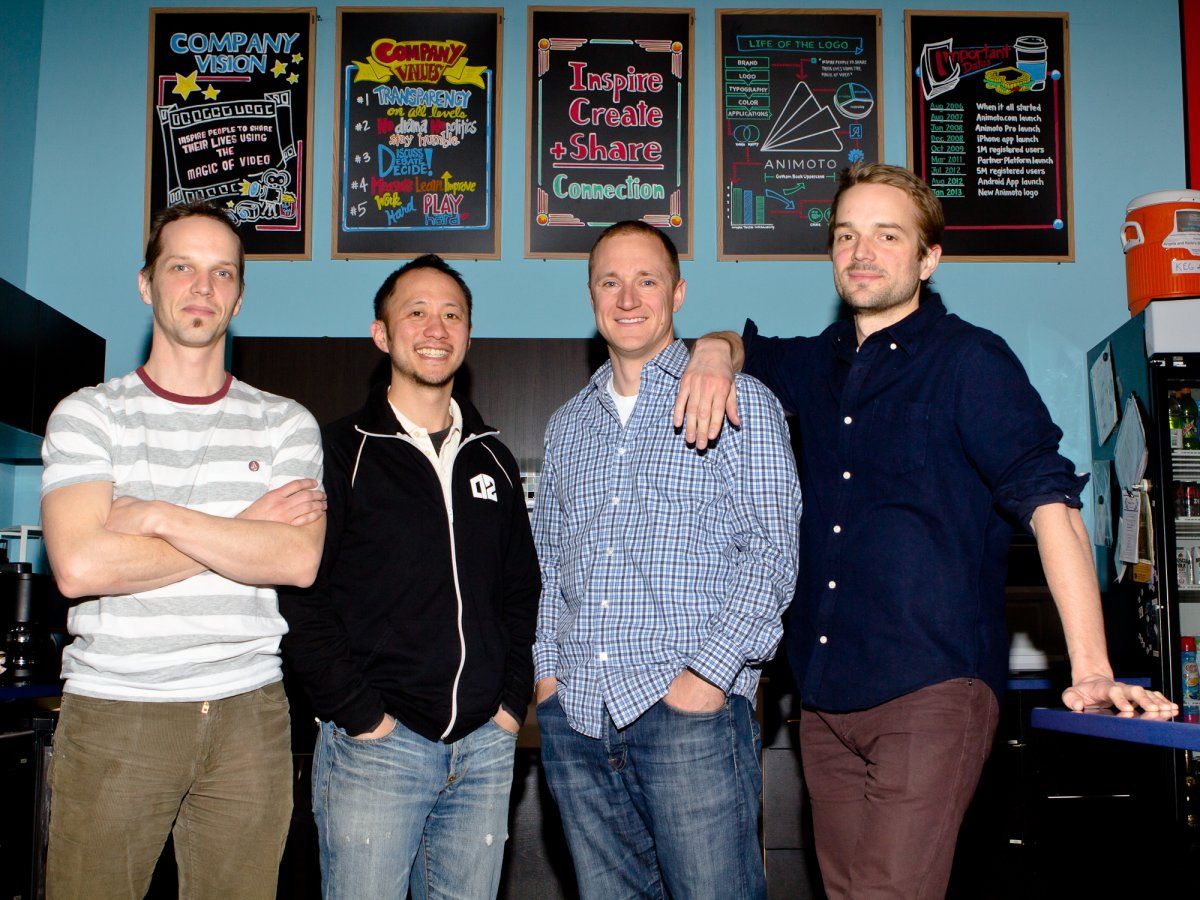 “[The idea was] rendering video frame for frame in the cloud,” Hsiao recalls. “[It was] totally nerdy, but nobody’s done that before.”

To kick start their year-long experiment, the four companions raised a family-and-friends round of funding. $25,000 checks were sent to potential investors in Seattle accompanied by a note “You’ll probably not see this money back, but if you love us, give us this money and help us chase our dreams.”

A pitch worth a warm half smile rendered a few hundred thousand dollars—a very respectable sum for four guys with regular salaries and very irregular dreams. The startup capital would cover a year’s worth of rent, food and other miscellaneous expenses with ease. If we count salaries, the founders had sunk about $300,000 prior to that point already to build the MVP. 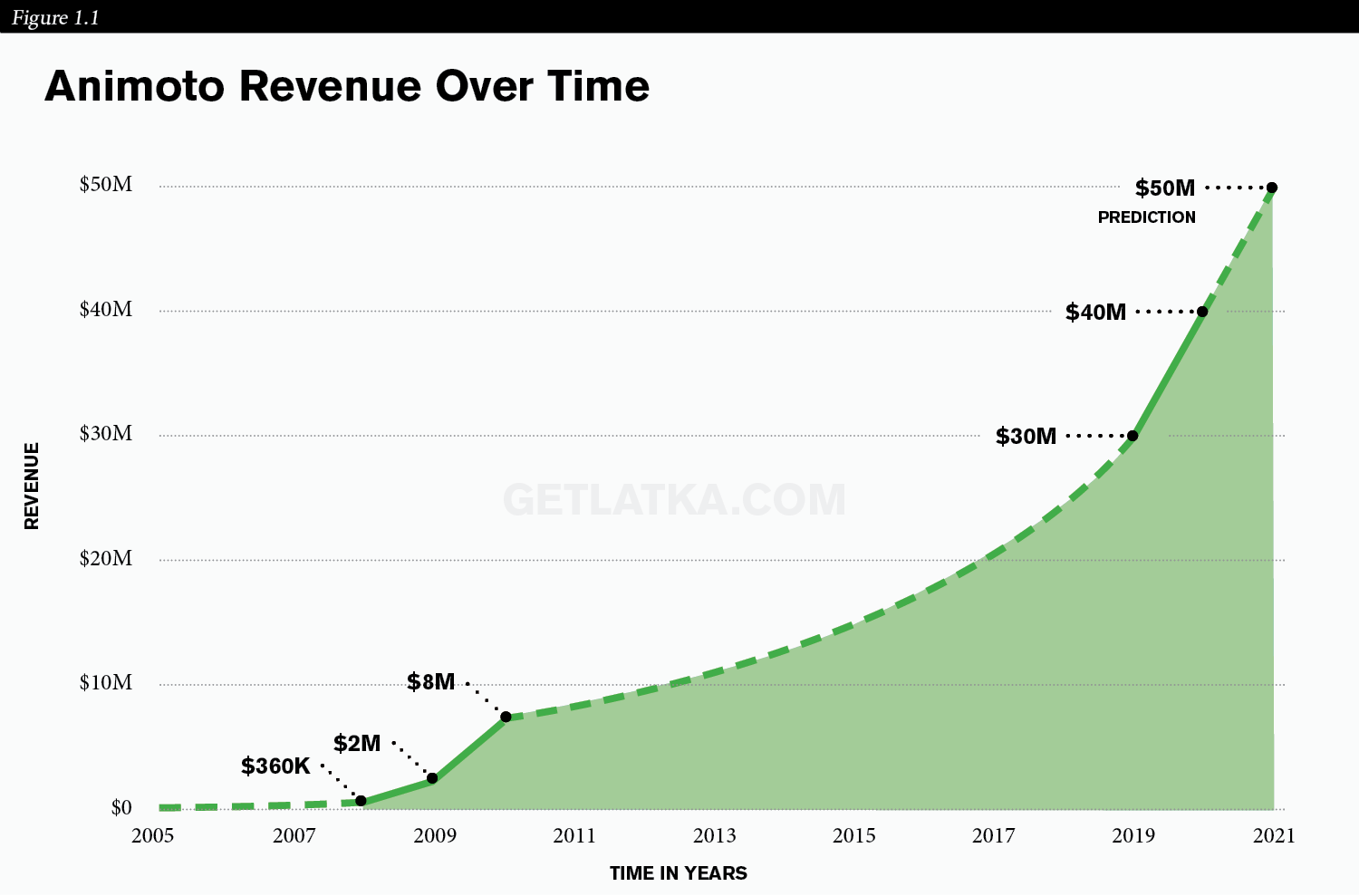 “We didn’t know who was going to use Animoto”

“We’re total product and technology nerds. We didn’t know who was gonna use Animoto. The first dot-com bubble taught me that you don’t just create eyeballs and then tackle your business model; you have to figure out how to actually make money.”

The influences around Animoto’s founders would aggressively advise them to keep their services free. “No one pays for anything on the Internet! Look at Google, look at Yahoo, look at Netscape.” they’d say.

For their own good, Hsiao and the team believed that if they did something well enough, people would pay money, no matter whether via Internet or not:

“We kind of stuck to our guns and it was like, in the early days, 3 bucks a video or 30 bucks a year for all you can make. And we kind of just made that up because no one else was really charging Christa. And then we launched, and we didn’t know who was gonna use it.”

Sounds like the Wild West of pre-Facebook days alright.

What Animoto founders lacked in business strategy they made up for in product. It wasn’t long before Michael Arrington—then head of TechCrunch—noticed the startup and wrote a piece called Happy Birthday Animoto. You Guys Make Me Happy.

“[The article said] here are these guys who are doing one specific thing really really well,” Hsiao said. “He just kind of became a fan and followed us for a few years. That sort of exposure in the early days set us in motion.” 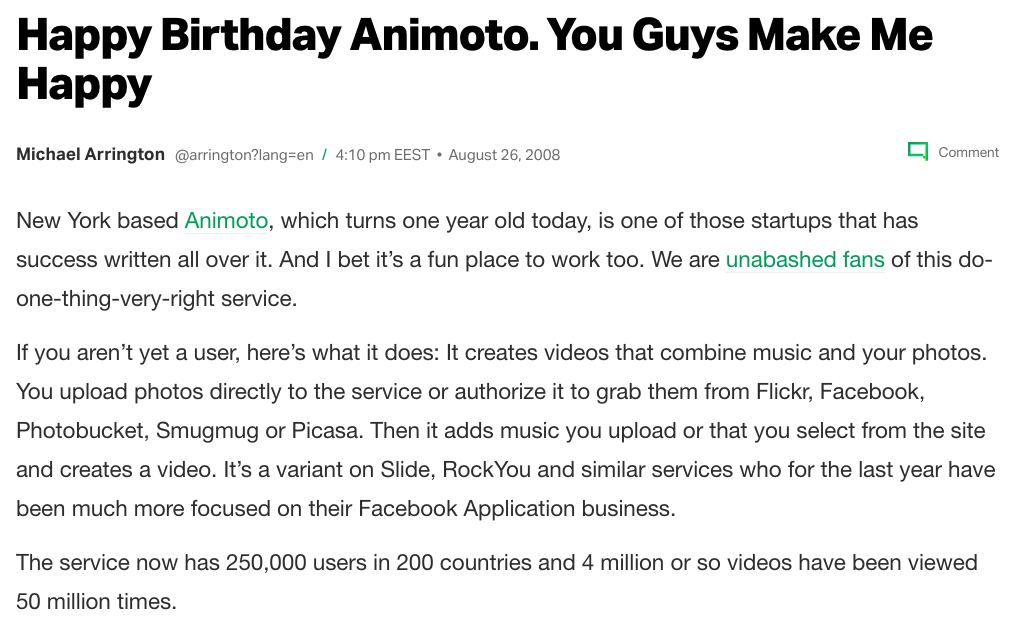 Market Not Fully There Yet, CEO Says

Animoto is a drag-and-drop video making tool. So, given you have a decent vision for a video, you’ll be able to craft it yourself even with virtually non-existent editing skills. In Hsiao’s words, Animoto should be considered as a video-making equivalent of Canva or Squarespace.

The current version of the SaaS kickstarts their users with 9 types of video, and plenty of templates for each: 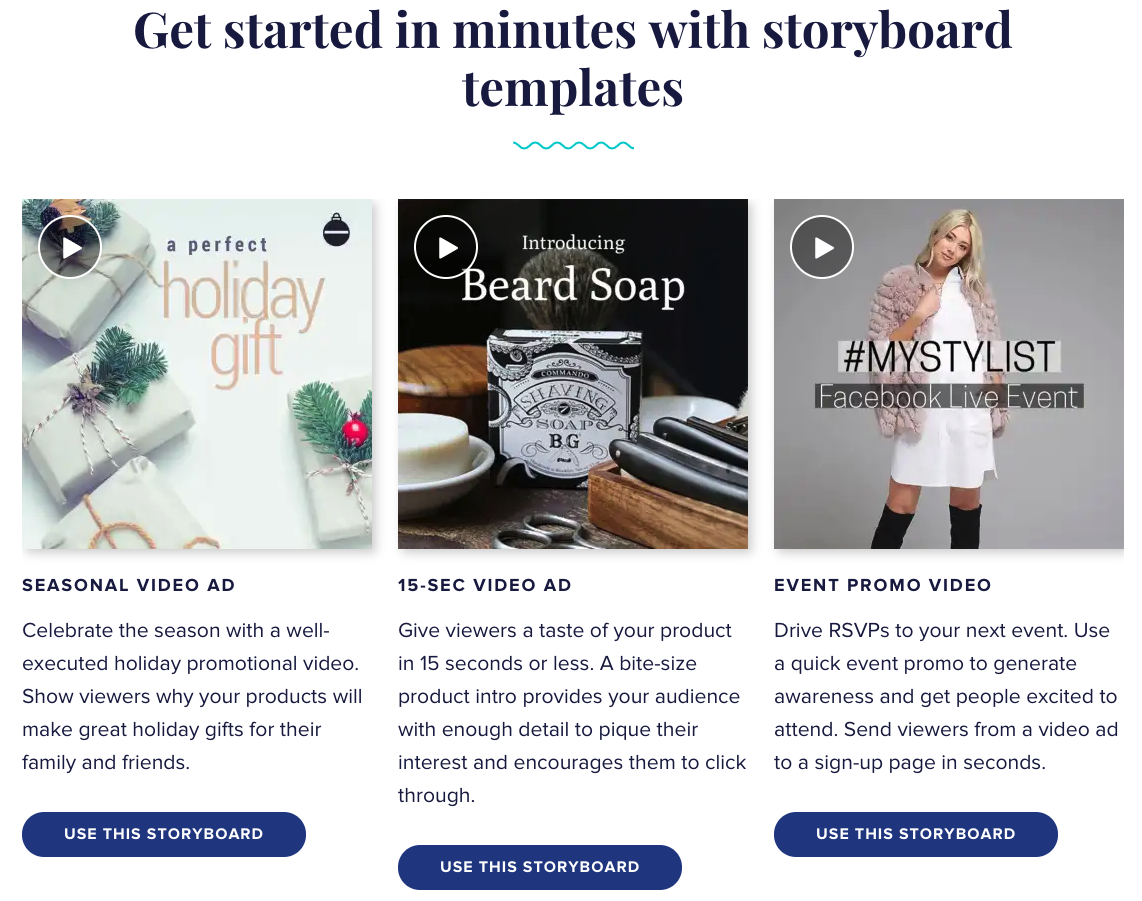 A freemium service with a 14-day free trial, Animoto offers three billing tiers: $60/year, $396/year and $588/year. The average customer, Hsiao says, pays around $200-$250 a year. Monthly payments are an option, if you don’t mind the small premium.

Is video a fully adopted technology by the market? Not yet, Hsiao argues:

“Some people come back after 6 months or 12 months or 5 years or whatever. So it’s a little bit all over the place. But I think we’re getting into a wave where people are like ‘OK, video is actually like a form of communication. I need to start to figure out how to use this more regularly.’”

The global video editing software market is projected to reach $932.7 million by 2025.

From Hype to Focus

During those infancy stages in ‘07-’08, Animoto didn’t focus specifically on businesses, but rather anyone who wanted to create videos. Since the startup charged on a per-video basis, niching down didn’t seem to make sense. This lead Animoto to serve “tens of thousands” of customers, Hsiao said.

The hype burned through the next couple of years, where the reassuring usage numbers made the founders feel like “everyone was using Animoto.” It was only around 2011 when Hsiao and the team realized they “had no idea what they were actually doing and who they were focused on.”

How does Animoto make their customers stick around?

The secret lies in a flexible, multi-layered approach, Hsiao explains. “About 20%” of customers are serious players who will “stick around forever,” the co-founder reveals. The rest are smaller businesses who don’t yet have the need to pump out videos for social media ads. They might suffice with creating one or two videos and discontinue their account—but they will come back once they grow, along with their marketing needs.

Hsiao’s philosophy is to be there for those smaller customers when they do get to that breakthrough point.

No Expansion Revenue, Word of Mouth a Primary Growth Channel

To make up for those in-and-out customers—who make up the bulk of Animoto’s business—it would make sense for the founders to aggressively take advantage of their expansion revenue potential.

Hsiao, however, humbly says that’s not their strong suit.

“We’re kind of strong at the top of the funnel,” the co-founder explains. “Our growth comes more from top-of-funnel, finding new customers. I think we could actually do better on the “win-back” and retention side of things.”

Where do those new customers come from? Word of mouth, Hsiao says. Video is the type of thing built to be shared, which makes the most boring-yet-effective marketing channel ingrained into the product.

To give you guys something you can replicate, I pushed Jason to give me a specific marketing channel or technique that worked for them.

“[The second best channel] is, basically, direct, paid marketing,” nothing new under the sun, Hsiao says. “On Facebook, on Instagram, on social—using video. So […] we’re actually eating our own dog food.”

The entrepreneur argues that social media is still underrated as a marketing channel for small businesses. Traditional marketing, which Hsiao defines as luring people to back to your website at all costs, is not the only way to go.

“You can actually take your message to where the conversation is already happening,” the founder explains. “And that’s on social media.”

How effective is Animoto’s social media marketing? Jason didn’t give an exact customer acquisition cost number, but he did say that the company is satisfied with a 24-month payback period for each customer.

The question is: how can they afford it?

They “grew into it,” Hsiao says. At first, they used to cap their payback period at 12 months, but as the cash flow became healthier, Animoto grew more comfortable experimenting with their social media marketing efforts.

“Now we feel that we’re confident enough with [social media as a marketing channel,]” Hsiao says. “And we have enough cash in the bank that we can extend to 24 months.”

The co-founder emphasizes that social media is not their primary marketing channel. If it were their only channel for generating new leads, they “might’ve been more risk averse.”

According to SimilarWeb data, Animoto’s website gets around 1.55M hits each month. Out of those, Hsiao says, about 150,000 sign up for the 14-day free trial. With a 7% conversion rate, that’s 10,500 new customers—paying $250 a year on average. In plain English, that’s $1 million worth of ARR added to Animoto’s bottom line each month. 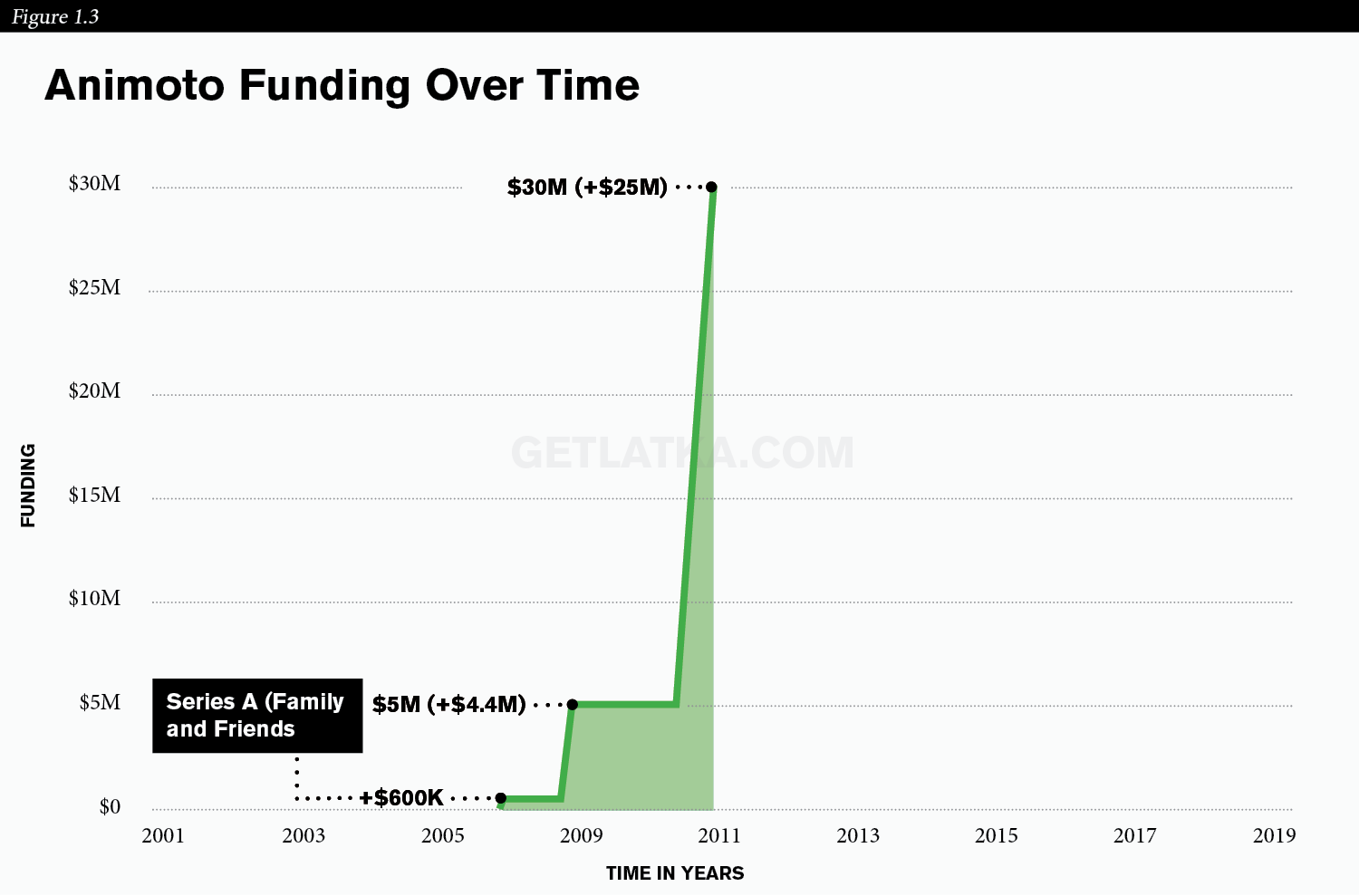 Animoto employs about 100 people, most of whom are based in New York, with “a handful of folks” based in San Francisco. Heavy on the product side of things, “about two-thirds” of Animoto’s team are engineers or at least related to product development.

Unsurprisingly at this price point, the company does not have quota-carrying sales reps.

“It’s too cheap for that,” Hsiao agrees. “We’ve entertained the idea, but we need to rely on cheaper channels.”

Counting in the family-and-friends investments, Animoto has gone through three rounds of funding. Their Series B was funded mostly by the Madrona Venture Group, along with “a few other folks, including Amazon.” Animoto’s Series C was funded by a private equity group Spectrum Equity. In total, the company has raised $30 million, with about one-third of that being secondary investment.

All investments took place between 2007 and 2011, and Animoto hasn’t raised since.

“We’ve been very lucky. From day one, we’ve been running a so-called cash-flow-neutral business,” Hsiao explains. “We’ve always been making money. So the periods of raising money [were meant to] take advantage of spurts of growth. We’ve always been cash-flow positive. We’re in a great spot financially.”

Hsiao says that “pretty much all” earnings are reinvested into the company.

After doing some math, Hsiao confirms that $30 million is a good estimate for Animoto’s annual recurring revenue. Hesitant to give a growth number, the founder settled on “around 20%” annual growth.

What’s Animoto’s next big target going into the new decade?

To pass the $50 million ARR mark, Hsiao estimates, Animoto will need “a couple of years, maybe a year and a half.”

The company is currently not too excited about big secondary investments. “What would we do with all that money?” Jason asks. Raising money comes at a cost, and there’s no obvious investment opportunity that would make it worth it. Plus, Hsiao says, they’re happy with their unconventional 6-member board dynamic.

Would Animoto take a $300 million deal from Canva? “I kind of love what we’re doing right now, and I want to keep doing it,” the entrepreneur says, smiling. 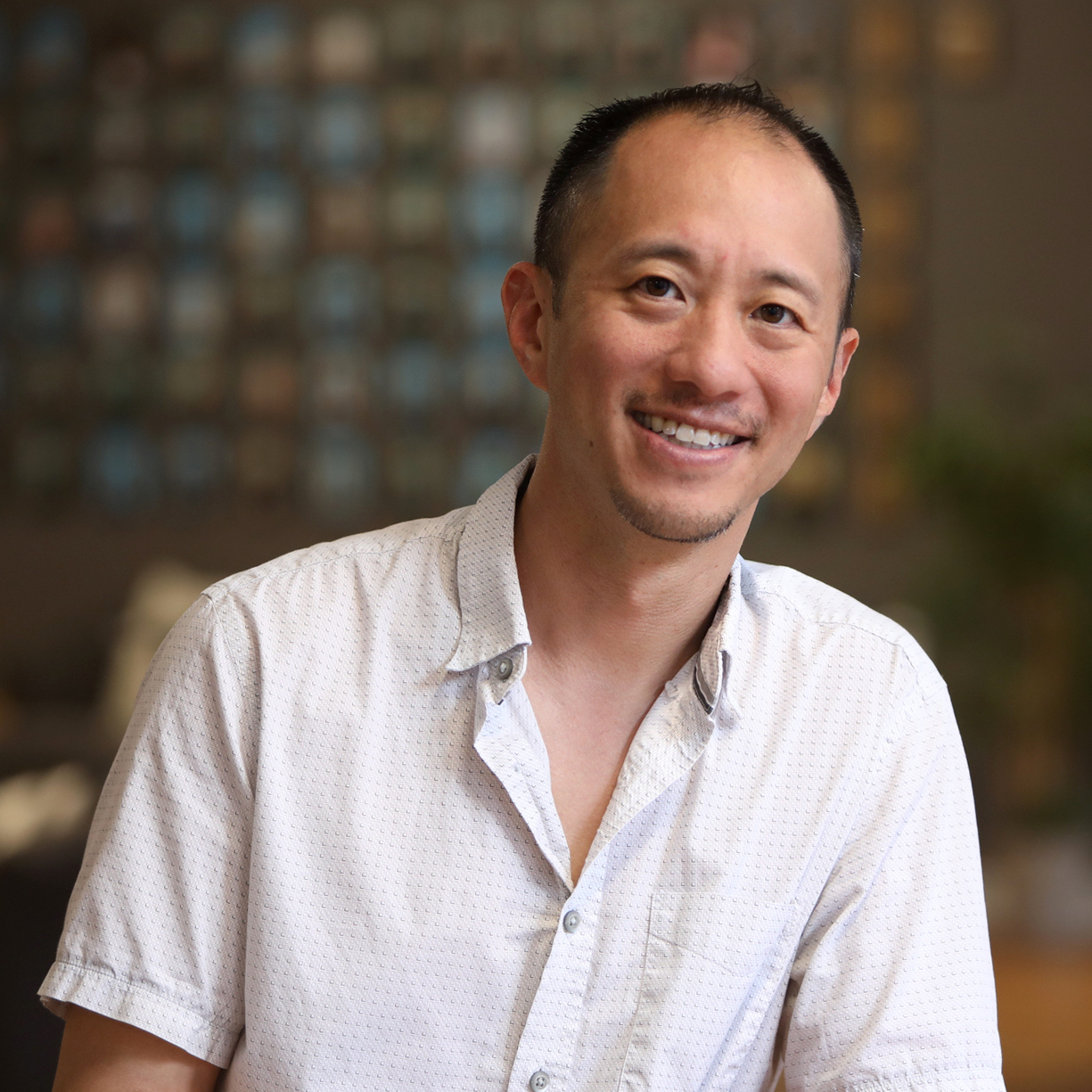 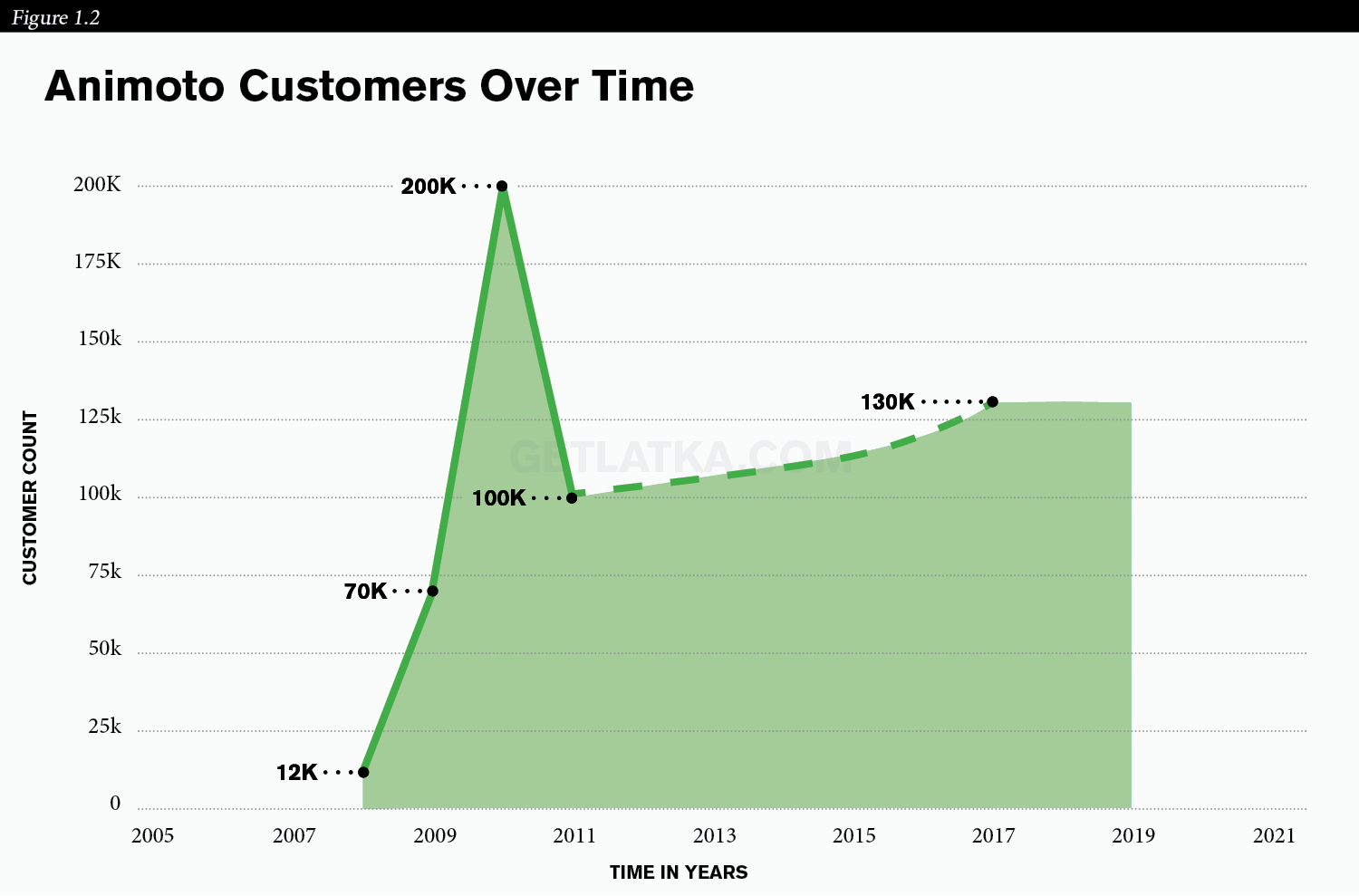 ADMIN How Kira Talent Solved Their CEO Issues, Now at $500k in MRR