Centro: The $150m SaaS Idea That Was Worth Four Years Of Zero Revenue

“We always try to meet our customers where they are.”

That’s what Shawn Riegsecker has to say about his company Centro, started in 2001 in the Chicago area and now a rising star in the field of digital marketing and business intelligence.

They’ve got offices across North America and aim at enterprise clients, offering data-driven online marketing solutions as well as an all-in-one service for getting them set up and running.

One of the things that sets Centro apart from other marketing firms is its repeated recognition as a “best place to work,” offering a dynamic and respectful company culture as well as truly going the extra mile with charitable giving.

How Did It All Get Started?

Riegsecker was able to secure two million dollars from investors in 2005 and 2006, working on automating digital advertising across local channels like newspaper, radio, and TV channels. Nobody else was doing that, and in 2010 they raised $22.5 million from FTV.

Just three years later another $30 million came from Neuberger Berman, which was very generous considering that the company was undergoing massive restructuring and didn’t become profitable again for years.

Patience paid off in 2017, however, when the new site launched with more than a decade of research and analysis behind it. It worked, and the company has been enjoying huge leaps in growth since then.

This article is based off of Nathan Latka’s podcast interview with Riegsecker, which you can watch here:

About 50% of the estimated 1700 yearly customers get only the actual advertising software that Centro provides, and the remaining half are supported in some way by the company on top of getting the software.

Onboarding and training comes along with the contracts, but the outsourcing is an additional fee on top of the software fee.

Riegsecker sees this like training wheels, where the customer can be kept in the loop on how the campaigns are going while not having to master the program from the get-go.

And of course, this is at the enterprise level, taking care of customers that would otherwise have been churning through different code bases and trying to build their own platforms for a problem that’s notoriously hard to automate away.

In fact, nearly half of the money raised has gone to acquisitions in order to get access to engineers and resources that have done this work before. 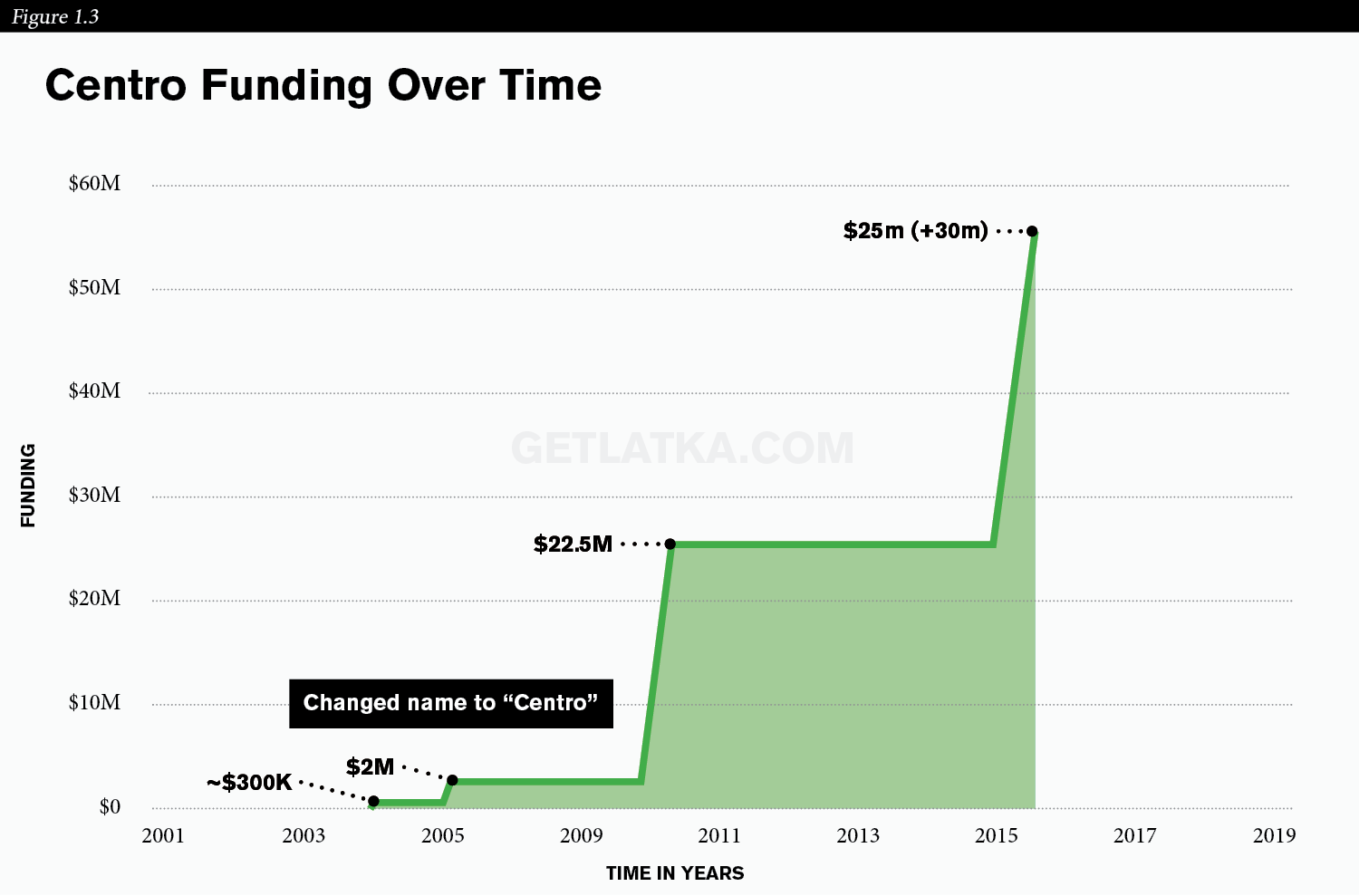 Naturally, the services have a higher churn rate than the embedded software alone. In that business, it’s easy for clients to switch to another service provider. But if they have Centro’s software, they’re already pretty locked in to the system.

If nothing else, that alone should be convincing proof of the quality of Riegsecker’s ideas. 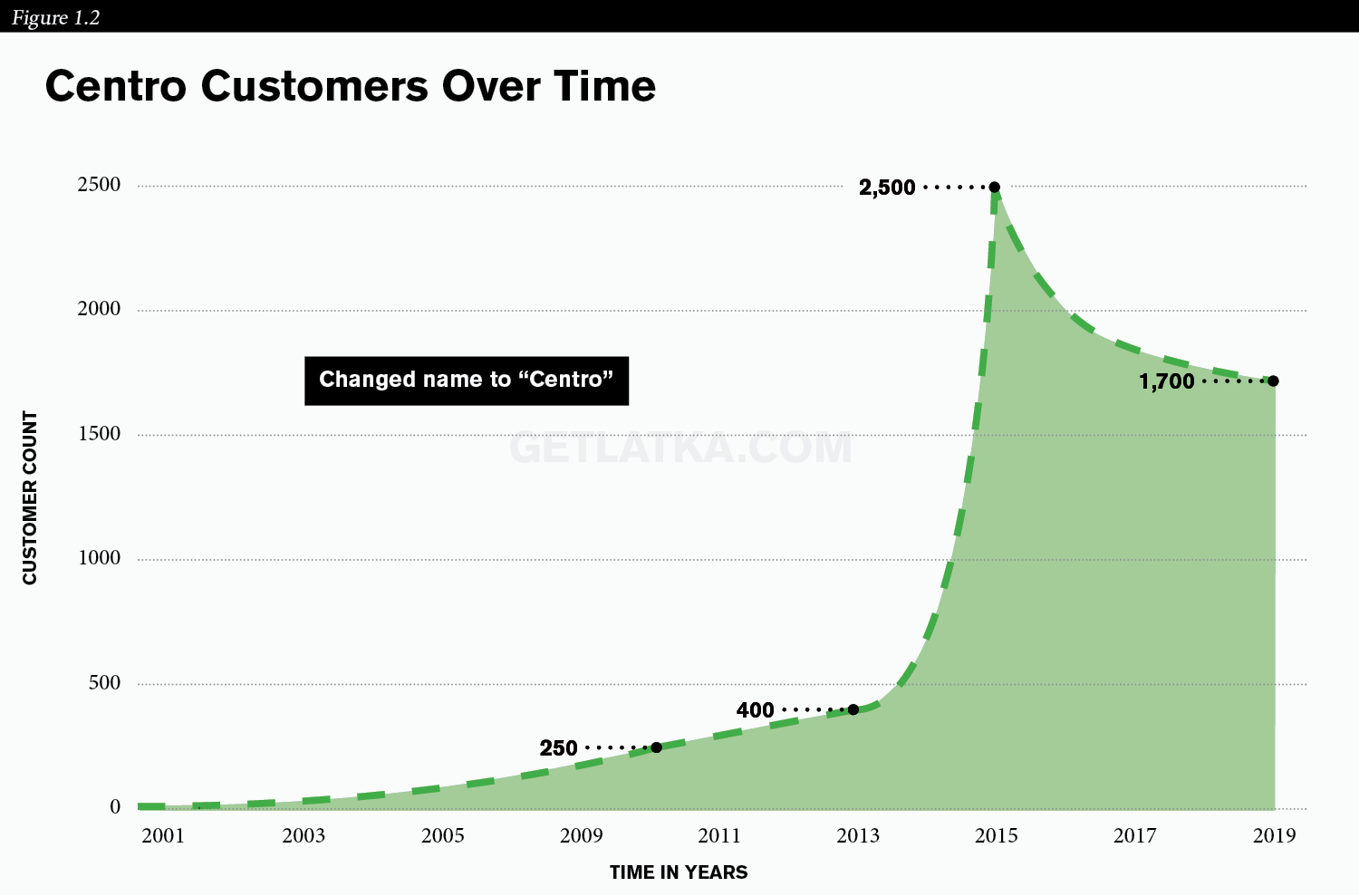 At Centro, the team is broken down like this:

Seven hundred total people are on the team, with 150 in R&D and 325 in sales and marketing.

Sales are huge for SaaS companies, anyone will tell you that. But Centro is a lot more gentle with the sales team than other companies might be – which naturally fits in to the company culture.

Most CEOs in the industry expect a return of investment from their sales team of about 10x – that is, if a sales team member is paid $100,000 annually, they’d better be bringing in a cool million every year.

Centro has the goalposts set at around 4x for most of the folks, and that’s for two reasons.

First, the advertising and marketing industry has a lot of seasonality. Q4 is the biggest quarter every year. Since the strong point at Centro is analytics, they understand that quite well and know that expecting identical quotas every quarter is unrealistic.

Second, most of the sales team is relatively new with Centro. Riegsecker projects that after five years, a new sales hire is likely to be bringing in 10x or even 15x their salary. In the first year, though, it may be as little as 2x.

Even at 2x, there’s still a positive cash flow, and although right now there’s not a ton of data on CAC (customer acquisition cost), the longevity and the effective double payment of these customers makes it worth it.

Now and the Future

Riegsecker wants to “take the slow road,” as he put it. He wants Centro to focus on providing top-quality service to the clients and reliably generate revenue.

In fact, he never uses debt in acquisitions, though that’s got an interesting reason behind it. The nature of his business means that he’s constantly got money flowing through the company, not necessarily into it in the big numbers that he’d need for tons of cash-based acquisitions.

Since different clients are bringing in and spending money through the platform at different rates, Centro has to keep a negative float of several million dollars quarterly to account for the unpredictable cash flow. That limits his credit for using debt to finance acquisitions, and therefore he’s content to use his own capital.

Either that or fundraise.

What Centro Could Be

Though he isn’t yet in talks with MediaOcean or Vista, Riegsecker has a good relationship with people at both organizations and would be willing to discuss partnerships. Over the next several years, he wants to see his company become even more high-profile and expand to several more offices internationally.

“I’ve always had this belief,” he says, “that if you want to be successful, it’s going to take a lot of hard work and effort.”

At the same time, he wants a good work-life balance for himself and his employees. He wants his team members to work hard and help him grow Centro into a household name, but if it takes a little longer because his sales team are bringing in 5x instead of 8x their salaries, so be it.

When the numbers are all there in front of you, though, it seems like he’s doing the right thing. Revenue was north of $100 million last year and he’d like to break $150 million in 2019, at the same time that they’re looking to raise another $100 million in investment.

Optimistic yet level-headed, results-driven yet balanced, that’s a recipe for success. And that’ s what Centro has achieved.

About the CEO Shawn Riegsecker

Shawn Riegsecker was born in Ohio but now calls Chicago home, as it’s the headquarters for his massively successful Centro, Inc. He has been named Illinois Technology Association CEO of the Year.

Advice to 20-year-old self: “Try to find more of a balance…don’t give up on your personal life.”