by Kimberlee
in Uncategorized
10 min read
0

2019 was the year for SaaS companies.

Just take a look at the newly rebuilt “BVP Nasdaq Emerging Cloud Index“; a collection of SaaS and cloud companies. The index helps provide useful data on the value of modern software and tooling concerns. According to TechCrunch’s Alex Wilhelm, if the index rises, it’s good news for startups as it shows investors are bidding up the value of SaaS companies as they grow.

And if the index falls? Well, that could mean revenue multiples are contracting amongst the public comps of SaaS startups. Looking at the index, it seems that the worth of public SaaS is doing anything but falling. 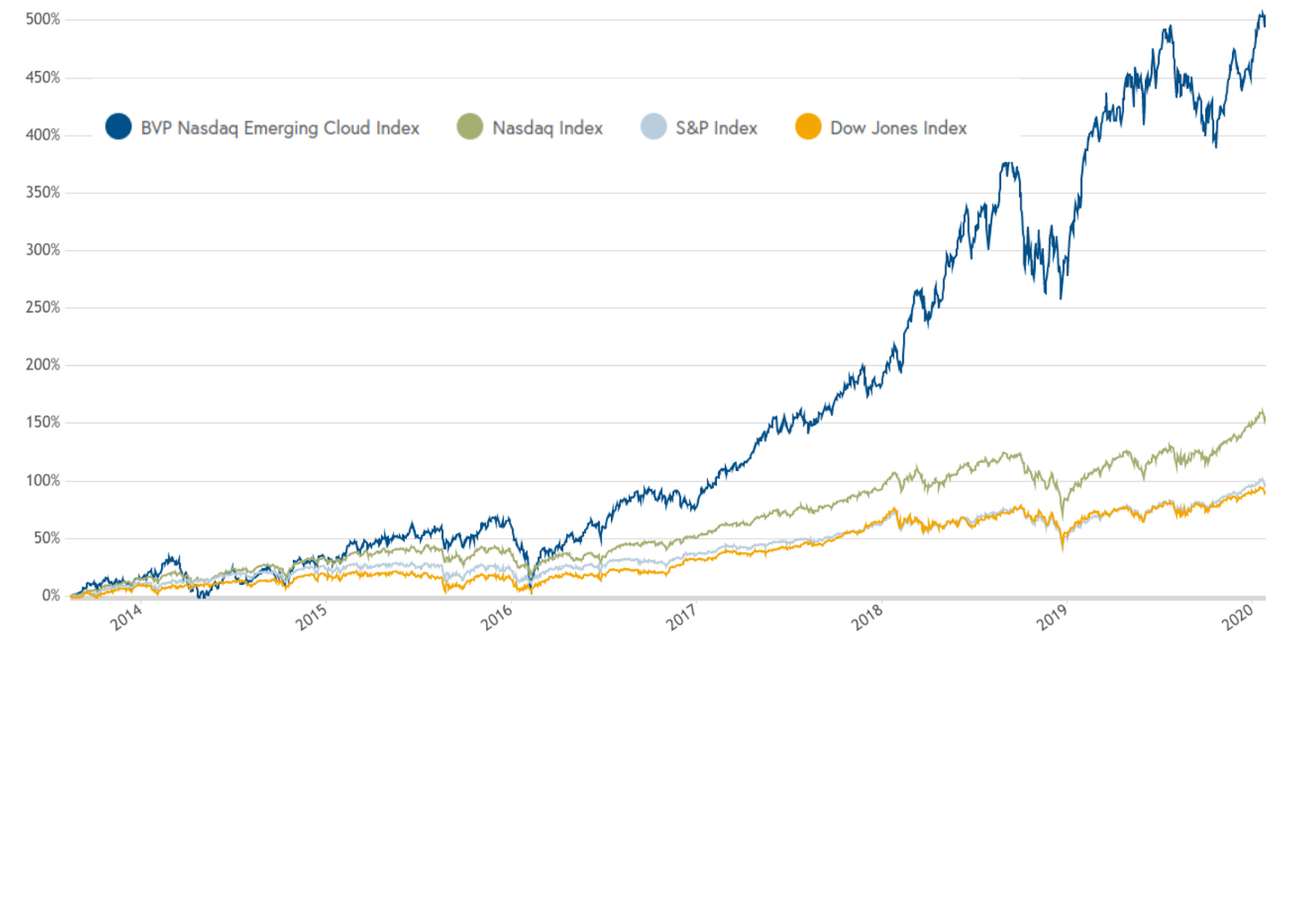 It looks like 2020 is shaping up to be another exciting year for SaaS companies who are looking to IPO. To see what trends we might see this year, Nathan sat down with Rishi Jaluria, senior research analyst with D.A. Davidson. The firm advises technology companies and their shareholders on their most significant transactions, including raising capital, going through an M&A event or going public.

Here are the trends Jaluria sees in the SaaS space, and what he looks for a successful IPO.

What does D.A. Davidson do?

Founded in Montana in 1935, D.A. Davidson Companies is a financial services firm offering advice to individuals, corporations, institutions and municipalities around America. The firm has now expanded and has regional headquarters in Great Falls, Denver, Los Angeles, Portland and Seattle. It also employs approximately 1,400 associates.

The company is the largest full-service investment firm in the Northwest. It has most recently handled multi-million dollar deals for SaaS companies including Mobile Solutions, Building Systems Design and Planet DDS.

Snowflake well-positioned to IPO this year

In December, Nathan predicted Snowflake would successfully IPO at the end of 2020.

After the release of Okta’s annual growth report, Snowflake is now the fastest-growing cloud-based software program.  The report highlighted Snowflake’s massive growth within its customer base; its use among clients more than tripled in 2019.

“One of them is the ongoing shift from on-premise to cloud environments, so they’ve been able to take away the legacy Teradata and Netezza workloads from those data warehouses,” he says.

The other shift has been customers moving from platforms like AWS Redshift over to Snowflake’s platform, which coincides with Okra’s findings of massive growth in the company’s customer base.

“I think both of those tailwinds have worked really well in their favor and allowed this kind of exponential growth that you’ve seen out of Snowflake to make them one of the fastest-growing Enterprise SaaS companies out there,” Jaluria says.

“I would expect them to do really, really well once they hit the public markets because of all the tailwinds they’re enjoying, and their growth is not slowing down. “

The movement also opens up the possibility of Amazon acquiring Snowflake before they IPO. Rishi says he would not be shocked if that scenario ended up becoming a reality.

He says it’s common for companies going down the IPO path to run a “dual-track” process.

“On the one hand, they have the IPO, and at the same time, they are actively shopping themselves out there,” he says.

Freshworks has been an incredible success story out of India’s growing SaaS space.

Their small business offerings include products like Freshdesk and Freshchat. Last time we spoke to them, they were pulling over $100m in revenues with 150k paying customers. A predicted 2021 IPO was first reported by The Times Of India last year and gained a $3.5B valuation thanks to a $150m Series H funding round in November.

However, Freshdesk makes up for more than 85% of their total revenue. And, only 6% of customers pay for one or more of the company’s 12+ products.

Jaluria says when public investors are looking at SaaS companies, there is a debate about whether something is a feature, a product, or a platform. He predicts with the company being so reliant on a single product, public investors may be a little skeptical about Freshworks.

“If a single product company has all the other products, but nobody is using them, it has a tougher chance of becoming a platform down the line,” he says.

“A lot of companies are looking more and more to consolidate their IT spending.

“Not let’s go back to the days of a monolithic stack of Oracle and Microsoft, but they do want to maybe not have ten different HR solutions and instead have one full HCM platform.”

Using this scenario, SaaS companies that are relying on the majority of their revenue from one product will have a harder time down the line.

We’ve talked about GitLab’s IPO plans before, especially after they landed their 20x multiple valuation of $2.75b in November.

The company even has a section on its website that outlines a 3-year cadence strategy, and its IPO goal date: Wednesday, November 18, 2020. Their 143% YoY growth has been remarkable, and they’re planning to spend $50m of GitLab’s cash this fiscal year on development costs like product functionality to fuel growth. 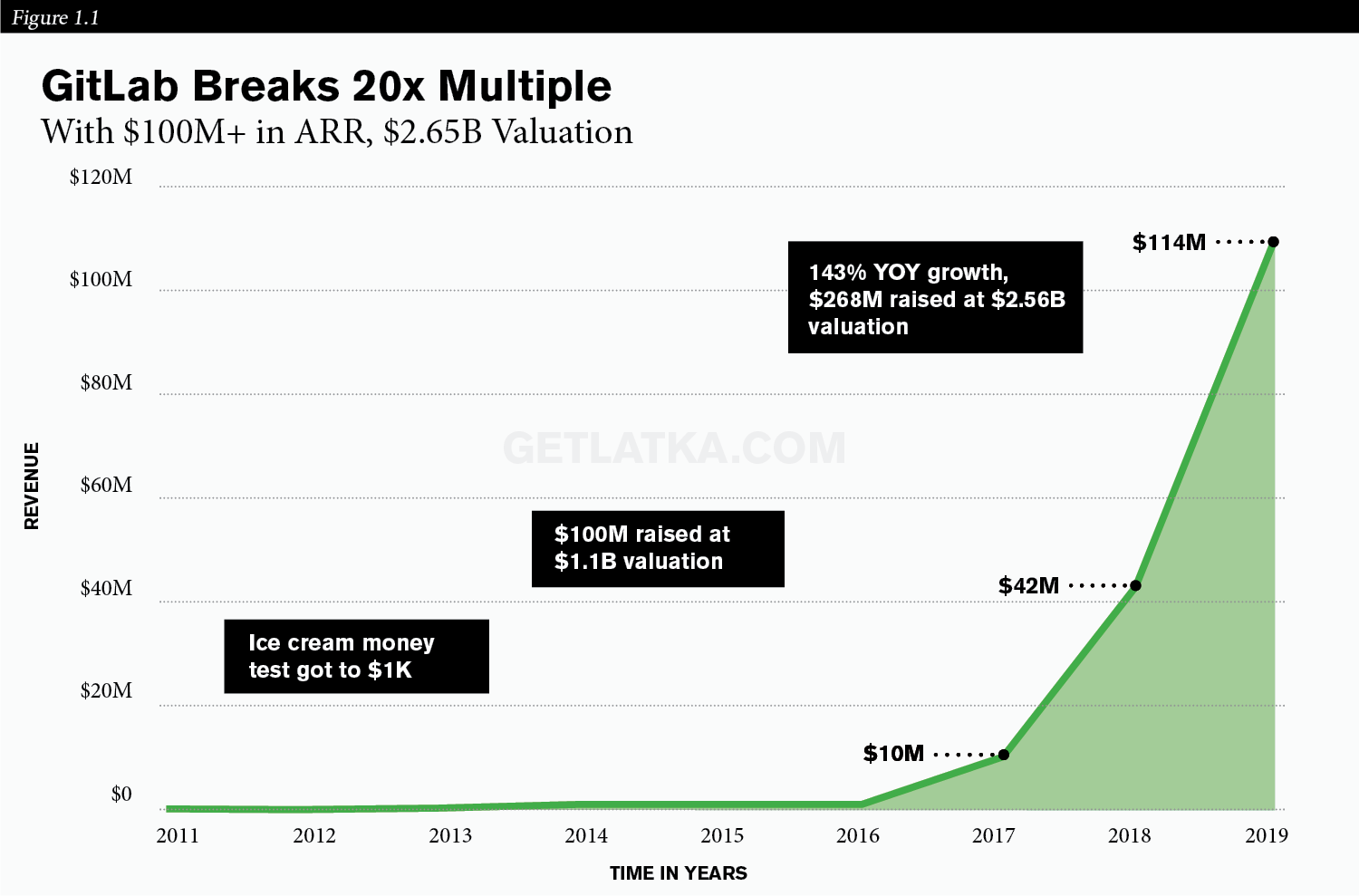 Jaluria says as long as GitLab’s story is told well and is understood by investors, the company plans should play out nicely.

He says the appetite for DevOps tools like GitLab is very healthy right now for two reasons:

“Essentially we’re at this point where public investors understand how important the developers are,” Jaluria says.

“Any tools that make a developer more effective and make their lives easier are going to do really well, and DevOps is no doubt a really strong, ongoing trend.”

It won’t be a surprise if some private equity firms look to the public markets this year and take some of their portfolio companies public.

2019 IPOs in Enterprise software land have been very successful. CNBC’s Bob Pisani noted late last year that Enterprise SaaS companies were among the most successful initial public stock offerings of the year. Pisani said there had been nine SaaS IPOs, raising $11.2 billion.

And the average return of those nine? 54%.

Of the Enterprise SaaS IPOs made last year, Rishi said only one had broken issue. According to Rishi, the IPO window is open for business right now and businesses shouldn’t hit any kind of volatility until, perhaps, the 2020 presidential election.

“Last year, we saw private equity deals lining the public markets with companies like Dynatrace, and Ping Identity,” he said.

“There are these rivers out there of private equity-backed firms of wanting to, at least, get companies out into the public markets and lock in a little bit of gain.

“I would not be surprised to see more of that happening again this year.”

Earlier this month, Jaluria told the San Francisco Business Times he believes Wall Street was generally happy with the performance of tech stocks in 2019. Nasdaq was up 35% in 2019. Even more telling, the Nasdaq Composite, which is 50% tech stocks, serves as a good barometer for the health of the tech market.

In the final weeks of December, the Nasdaq broke through a new milestone of 9,000.

Pre-IPO SaaS companies should focus on growth over cash-burn

For companies who are planning to IPO, there’s a decision to be made. Should they set a growth rate target to hit, or should they conserve their cash on hand?

From Jaluria’s perspective, the bias is towards growth.

“If a company went public with 50% revenue growth and 10% cash burn, that would probably be more well received than one that was doing 10% growth with 30% pre-cash-flow margins,” he said.

“For cash-burning companies, they also have to be able to tell a very effective story of a path to profitability.”

Jaluria says success relies on proving that if they’re not profitable today, they have the pieces in place that they will become profitable. He says looking at gross margins, net expansion rates, and sales efficiency paints a picture of whether a company can come from a cash-burning situation to eventually, healthy profitability.

Apart from looking at metrics like CAC/LTV and Net Expansion Rate, Jaluria says a crucial metric in determining a company’s pre-IPO health is their sales efficiency. To find this out, Jaluria calculates a company’s sales and marketing spend and then looks at the incremental revenue that is generated the following year. Finally, he averages the figures out over a multi-year timeframe.

What equates to good sales efficiency?

Jaluria says the average for public SaaS companies is medium point 8x. If a company spends $1 this year, they should be getting back 80c the following year in new Annual Recurring Revenue (ARR).

Jaluria’s thinking is backed up by investor Parsa Salijoughian, who works at late-stage VC-firm, IVP. Salijoughian says although the sales efficiency metric is a spin on a ‘magic number’, the proof of its viability is shown in recent IPOs. Here is how he calculates sales efficiency:

And to test the metric’s worth, he looked at every SaaS company that has gone public. He then built a snapshot of how they looked in the year prior to IPO. 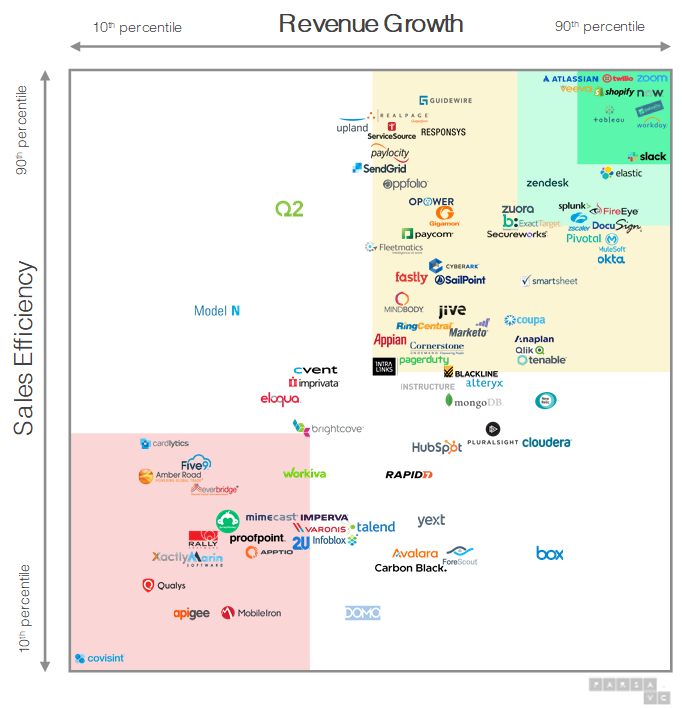 The companies are broken down into four percentiles:

The best companies sit above the 50th percentile on both dimensions. These are rewarded in the public markets, with double-digit Next Twelve Months (NTM) revenue multiples. As of May 2019, here were those same company’s averages of multiples and market cap at IPO:

Salijoughian says the companies in the 90th percentile traded, on average, at an 8.6x NTM revenue multiple at IPO. Post-IPO, some companies were trading at an eye-watering ~17x NTM multiple.

“Each of these companies is worth at least $10B today and combined represent over $250 billion in market value,” he says.

“Conversely, the companies in the bottom 40th percentile on both dimensions traded on average at only 3.4x NTM revenue at IPO.

“Few of these companies are worth more than $3B today, and many have been acquired for modest amounts.”

All signs point to a strong growth year for SaaS

The markets are bullish for SaaS companies right now, and investor confidence is rising. Tides are turning on what investors are looking for; they know tools like DevOps are starting to cement their place in the future of global growth. So, that’s where their money is going, investing in stocks of SaaS companies that promise a steady but scalable growth.

At GetLatka, we predict (at a minimum) for GitLab and Snowflake to IPO this year (if they’re not acquired earlier), and other companies like DataStax and even Instacart could try and do the same in 2020.