by Alan
in Uncategorized
12 min read
0

“Kill all the desk phones!” roared Craig Walker, the CEO and founder of a cloud-based business communications platform called DialPad, marching into the studio, beating his chest, grabbing the nearest landline phone we had, ripping it out of the desk and throwing it out the window.

Alright, maybe he didn’t do that—and maybe I interviewed him virtually—but that is pretty much DialPad’s mission statement.

You may know DialPad from their hilarious conference-call-waiting-room-jingle, and popular app UberConference launched back at TechCrunch disrupt 2012.

Back in 2011, when the company was founded, Craig was shocked at how real the need was for businesses to switch their voice comms from landlines over to something that’s easier to install, manage and, well, make use of.

Today, they are north of $60m in annual revenues. 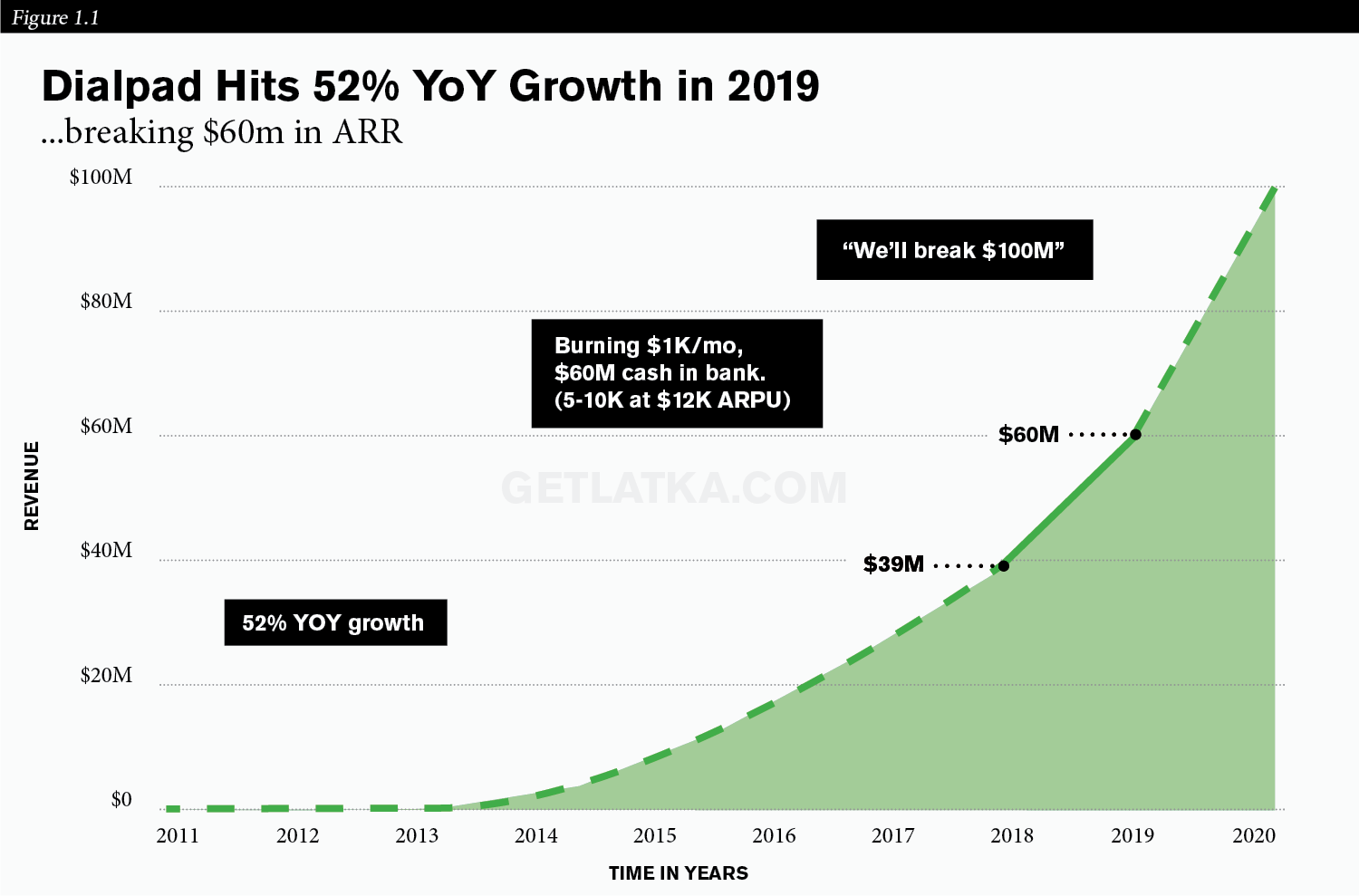 “Box was our first real customer and UberConference was our only product,” Walker recalls on DialPad’s beginnings. “

“…Then they came in with a $5,000/mo order. It legitimately blew my mind. I could not believe someone was gonna give us that much money.”

8 years into the VoIP revolution, DialPad has secured four rounds of funding, totaling $120M. Their Series D was a healthy $50 million completed in mid-2018. Walker says he could live with $1 million per month in burn.

With that last round of investment, Walker says, they “already had plenty of money in the bank”, but it seemed like a smart investment to enable the development of their AI department through the recent acquisition of TalkIQ.

Additionally, Dialpad is scaling up paid ads. According to aHref’s, the company was putting ad spend against 8k keywords in January 2019 and as of August have scaled up to over 13k keywords:

Today 5,000 enterprise brands are using DialPad, with the average yearly ticket amounting to $12,000. DialPad’s churn rate, according to the CEO, is “definitely below 10%.” 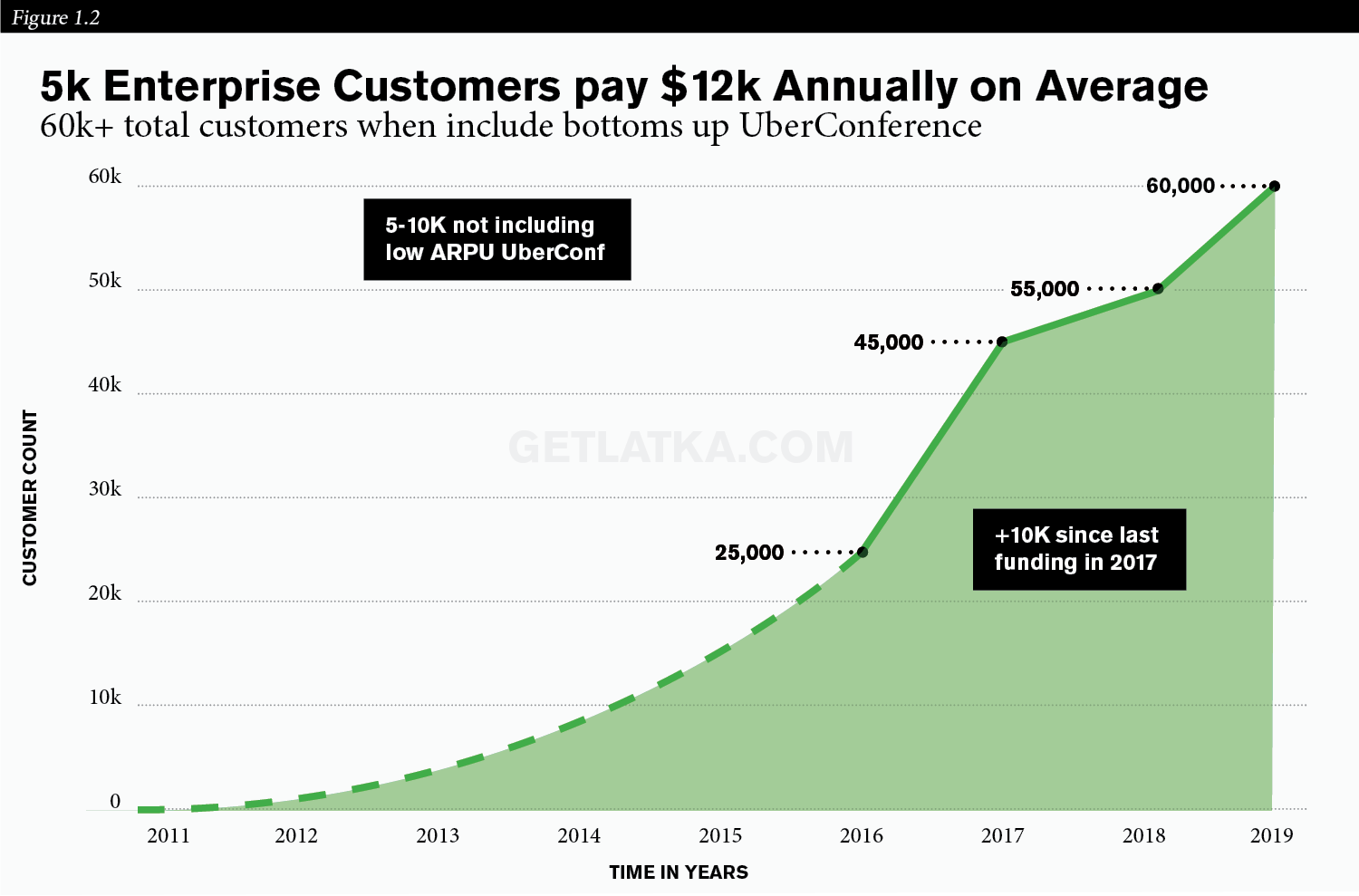 Downloading Dialpad is easy with many teams using the DialPad chrome extension and millions more downloading UberConference and other free tools.

What’s the context, and what makes DialPad succeed in this context?

The Problem: Desk Phones Are a Relic

Why do the desk phones need to be killed? 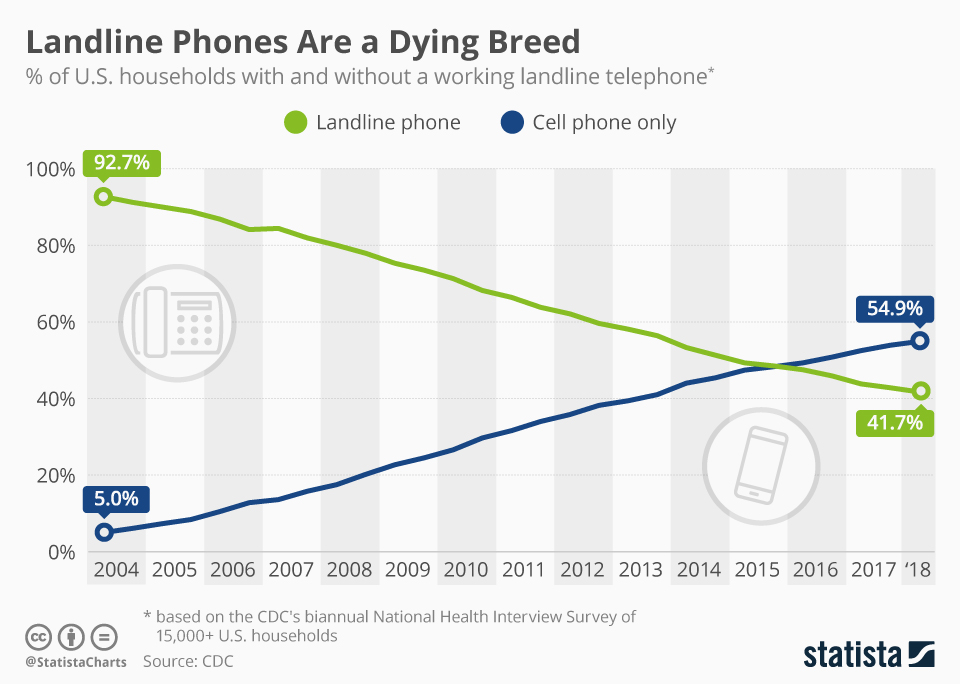 A similar shift is happening on the corporate scene; however, several challenges arise. De facto, most employees end up using their mobile phones even for business matters. Companies end up using several voice communication tools—one for conferencing, another for call center/customer support departments, and yet another for internal comms.

This creates a largely fragmented business communications environment, which lowers productivity and makes accountability a nightmare.

As VoIP services become more sophisticated and adapted to business needs, corporate users are actively migrating to the cloud, too. The total number of corporate VoIP subscribers worldwide is projected to reach 204.8 billion by 2020, which constitutes a $140 billion market by 2021 (an almost two-fold rise from $83 billion in 2015.)

In Walker’s words, the “telecommunications market is the last significant market that is yet to make the transition to the cloud.” He is positioning himself to be at the forefront of this transition.

Will Any Business Use Landlines in 2024?

There are several reasons why companies are actively exploring VoIP solutions:

The benefits of using solely cloud-based communications systems already outweigh the costs of removing the legacy systems, even for major enterprises:

DialPad provides businesses with four products: one for conferencing (think Skype), one for regular calls (a replacement for legacy PBX systems), and two variations of their call-center product (one tuned for sales, other for customer support.)

The competitive edge DialPad is aiming to establish is rooted in VoiceAI, its machine-learning real-time call assistant. Here’s what it does:

According to Crunchbase, DialPad is a pure play SaaS product which enables enterprise communications (conferencing, sales, customer support, internal comms) without any hardware required. The apps work across all devices—mobile phones, laptops, tablets—in an interconnected fashion.

DialPad Austin Hits 100 Employees, Company Is Growing at 125% Per Year

UberConference and the two variations of the call-center product remain DialPad’s entry-level products.

Inversely, convincing companies to switch their entire legacy phone systems to the DialPad’s cloud version is much more difficult.

“It’s total tops-down,” says DialPad’s CEO. “Ask the head of IT, he’s gonna do a full switch, rip out his legacy stuff and is gonna switch everything to the cloud.”

In the $50-$100MM ARR range, many companies start relying on expansion revenue via customer support, who drive adoption, cross-platform adoption and expansion revenue. DialPad is no exception.

None of DialPad’s products are up-selling usage based offers. Instead, they focus on providing their clients with dedicated customer success managers, and motivating those CSMs with quotas. According to Craig, at the moment around 75 out of 500 of their representatives work under some sort of a quota.

However, customer success managers only take over after 6 months of the client’s lifetime. For the first 6 months, the credit goes to the sales representative. In Walker’s words, “the first implementation [of the DialPad’s service] isn’t the [full] contract value,” as many of their clients will sample things out with a pilot project and move onto a larger order soon after.

In terms of churn-versus-expansion, Craig says that that DialPad’s churn is “definitely lower than 10%”, which means their expansion is about 35% yearly.

DialPad currently employs about 150 engineers across San Francisco, Vancouver, Waterloo and Bangalore. They do not take advantage of the economic incentives in these regions due to “rules and regulations,” which make the payoff not worth the cost.

Besides headcount, what else is DialPad spending $120 million in funding on? 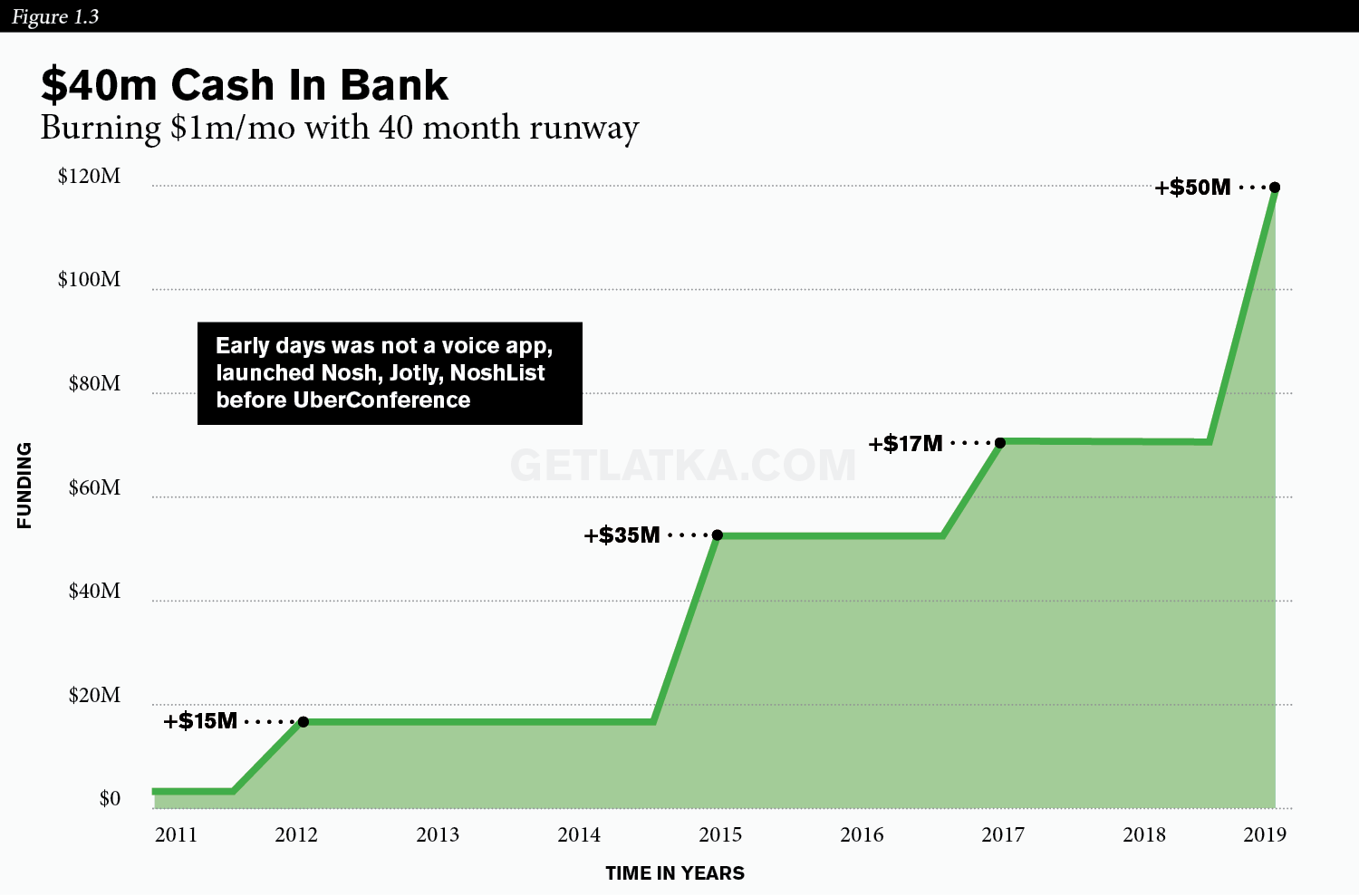 DialPad Acquired TalkIQ For $50 Million in 2018 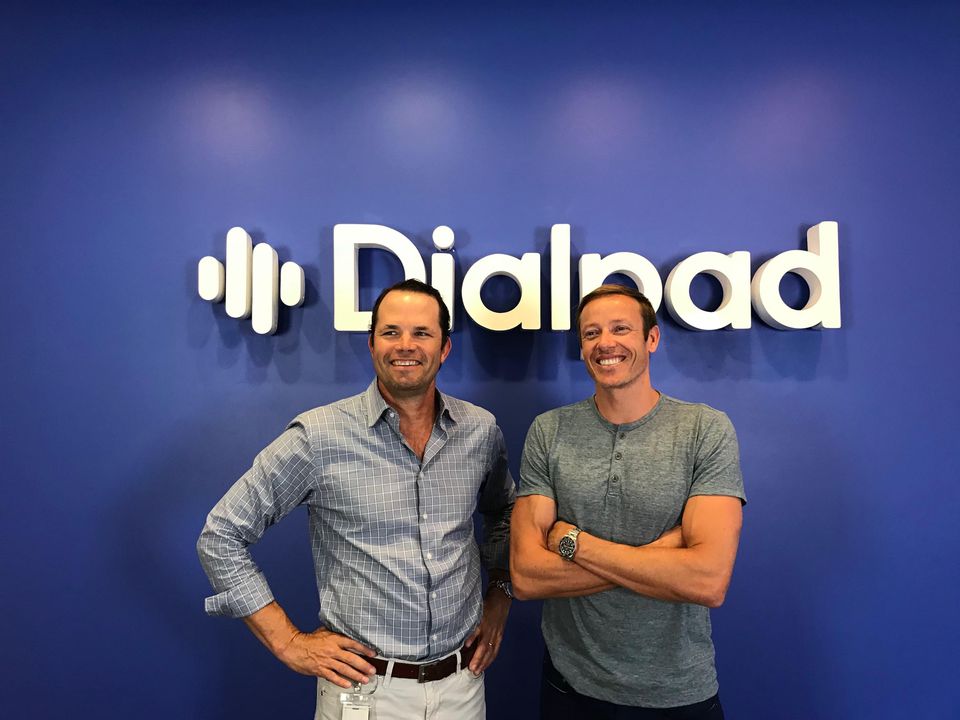 When the company was just founded, it only had UberConference—the conferencing product—and it really was just another cloud-based communications system. Millions of people downloaded and used Uberconference.

In recent years, however, the company recognized the enormous opportunity in combining their vast library of voice data with AI to set them apart from the competition.

Since UberConference is a freemium tool, it allowed DialPad to accumulate a rich library of industry-specific conversations over the years.

“At the end of the day, you have a trillion-dollar dollar industry of phone conversations,” Walker explains. “And putting those two together (the raw voice data and the AI capability), you can change what happens on those calls.”

According to the CEO of DialPad, most of the acquisition was paid with stock, which shows a strong trust in DialPad’s vision on TalkIQ’s side. Dan O’Connell, the former CEO of TalkIQ, is now on DialPad’s board of directors and serves the company as the head of its Voice AI unit.

Will CEO Walker Acquire More Companies in 2020 To “Buy Up Voice Data”?

Based on the general mechanics of machine learning, you could argue that the company that gets the hold of the largest voice database will win the competition.

Walker corrects me, reminding that the quantity of the data isn’t the be-all-end-all solution, as there’s diminishing returns in how much value can you get out of the marginal minute of voice conversations:

“At a certain point, you have a minimum amount of training data you need for any language,” DialPad CEO explains. “And then, at a certain point, you have an overwhelmingly [large amount of data] – almost too much data to analyze. At the end of the day, […] it’s like lowering your golf score. Going from an 18 to a 12 is relatively easy to do, but from 12 to an 8 is like four times harder to do, and 8 to a 6 is eight times as hard.”

Instead, Walker emphasizes the quality of the data they’re working with.

“One of the things that is unique about our [voice AI] is that it gets trained on your specific company,” the CEO highlights the competitive advantage of their voice AI technology. “Let’s say, Customer A signs up for DialPad. They can put in their own lexicon, their own dictionary, their own names of their products, the names of their competitors.”

This type of individualized voice AI training enables DialPad to offer sales “battle cards” and transcripts in a way that DialPad customers can actually take advantage of.

“You can be some funky pharmaceutical company with weird product names, and […] everything is just gonna work really really well,” Walker adds. “Rather than this generic dataset of 100 million people saying ‘OK, Google, what time is it?’” 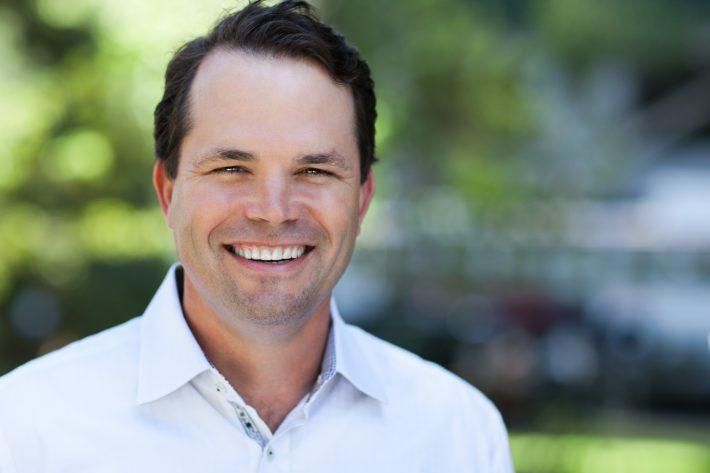 In 2001, Craig founded Dialpad Communications (a.k.a. DialPad 1.0, no direct relation to his current venture), a VoIP based Internet Telephony service which was acquired by Yahoo. After the acquisition, Walker led the integration of his technology, creating Yahoo! Voice.

He ended up buying the DialPad name back from Yahoo for under $100,000 years later.

The entrepreneur devoted his next 2 years to building GrandCentral communications, another telephony tool that allowed users to share a single phone number across different devices, among other features. GrandCentral was acquired by Google in 2007 for $50 million.

After this acquisition in 2007, Walker joined Google as the lead of Google Voice—a year later, Google Talk and Google Talk Video as well. He managed lead strategy, execution, launch and product direction, operations and partnerships for these products.

In 2010, Craig Walker became Google’s first Entrepreneur in Residence for a year, developing businesses in the enterprise communications space. After he left the company, it was Google Ventures who provided Series A funding for DialPad.

In 2011, Walker rebranded the business to Dialpad.

This year, Craig was a finalist in EY’s “Entrepreneur of the Year” contest.

How This CEO Bootstrapped Customerville to $12M+ in ARR