DiscoverOrg Now One Of The Largest Private B2B SaaS Companies With $325m in Revenues, IPO Next?

Brands use DiscoverOrg to make sure they have up to date information on leads to figure out who to sell to and how to reach them.

I first met Henry when he was 33 back in November 2016 when he came on my SaaS CEO podcast, The Top Entrepreneurs. He launched the company in 2007 at 23 years old.

Over the past 3 years, we’ve watched him and his team execute past many milestones including $165m in Revenues, and most recently acquiring their #1 rival ZoomInfo for rumored $500m+ putting combined revenues at $325m.

In November of 2018, 4 months before the ZoomInfo acquisition, I chatted more with Henry to understand some of the underlying systems that are driving DiscoverOrg’s success. 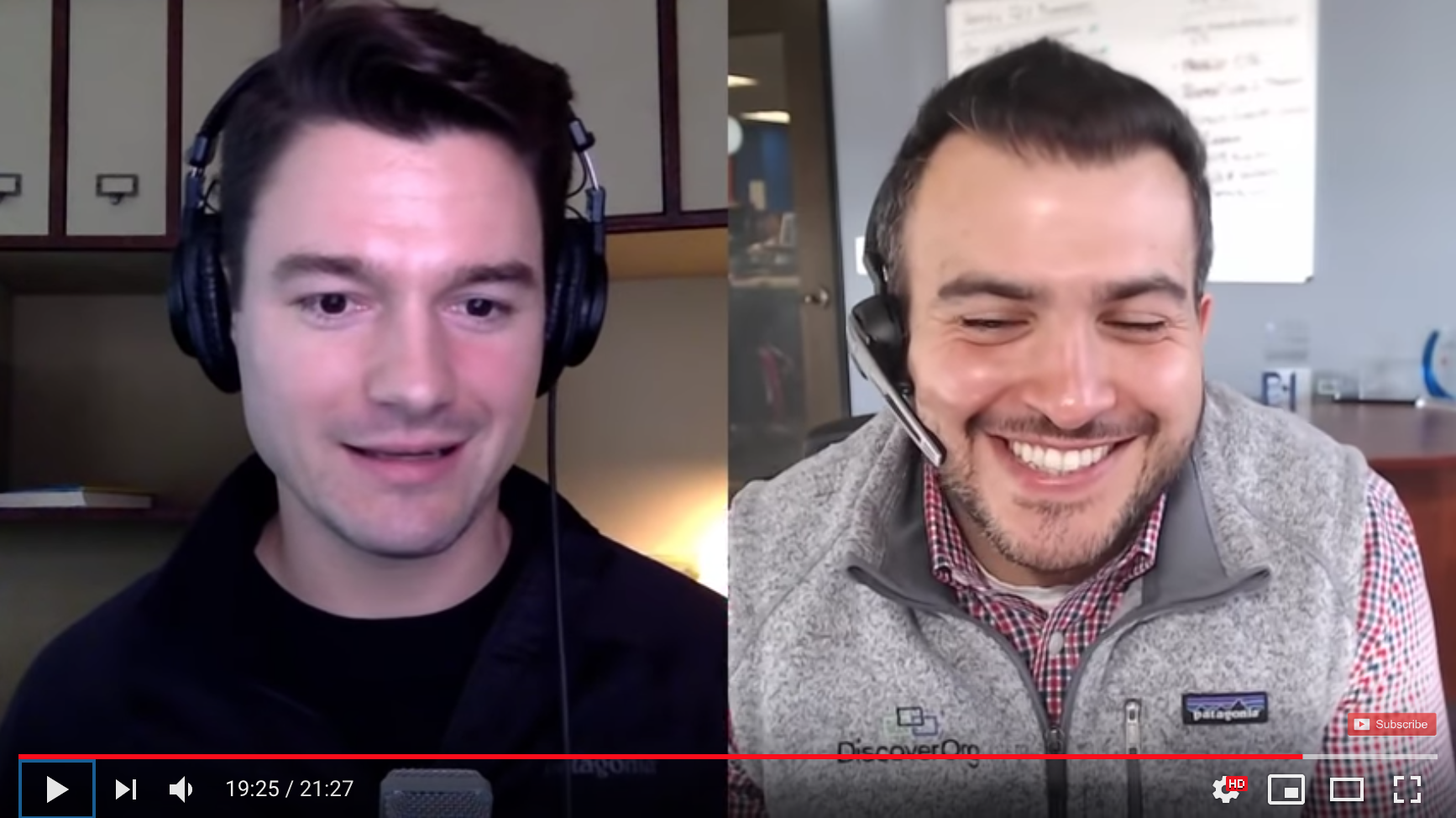 In 2012 Mainsail partners was the first to reach out to Henry and offer “less than half” of the $25m offer for 50%+ of the business Henry sold in 2014 to TA Associates.

Henry viewed the 2016 deal as a sort of exit which took some of pressure off him at ripe age of 30. He continued “Taking chips off the table made me into a better leader.”

“A great Private Equity partner can see scale potential for company that you just might not see yourself. Key is finding a great partner.”

It’s hard to tell which PE firms are good versus bad. Some want to replace you as CEO but won’t tell you in diligence.

Most PE firms have 5 year holding period so in 2018 TA Associates decided to take DiscoverOrg to market. They ended up selling 30% of their (TA Associates) DiscoverOrg holdings to Carlyle group.

Since this interview was happening in late 2018, 4 months before ZoomInfo deal closed, was fun re-watching Henry’s body language when I asked him about ZoomInfo (he was likely in middle of diligence to acquire them in blockbuster deal).

How Do You Differentiate From ZoomInfo? Why Acquire Them?

Henry says that 5 years ago, DiscoverOrg was only place to find prospect phone number. Today, “many options including longtail of midmarket and SMB players in the space including big player Microsoft with Linkedin.”

“All of us have nothing on Microsoft and Linkedin and sales solutions provider,” Henry shares. True statement, but more like a smart hedge for Henry to articulate to make sure they’re not seen as a monopoly.

When Henry thought about ZoomInfo acquisition (and acquisitions in general – they’ve done 4) he was looking for a new interesting data set in a different niche, or a data enrichment opportunity that he could sell to his 4500 customers.

Most importantly, he was looking for companies with bad sales processes, because he thinks he “has great one that he can apply to a company who hasn’t figured out that sales motion.”

“We’re doing what everyone knows they should be doing, but its hard to execute,” says Henry.

DiscoverOrg has 100 sales development reps. Each day they dial with Frontspin, use Outreach and Salesloft as email automation where data flows from DiscoverOrg into Salesforce and then out to these tools.

So hows the sausage get made?

Outbound SDR’s: List of target accounts and cold call.
Swat SDRS: Someone is warm lead, been nurtured, but not inbound/also not cold.
Inbound SDR’s: Call into leads for 2-3 mins to set demos

The One Metric DiscoverOrg Measures Across Account Executive Team

The metric Henry looks at is how many completed demos Account Executives complete each month. Target is 20 per rep, so about 2000 demos total across full team.

AE’s don’t do any hunting on their own. 5 AE’s and 5 SDR’s are grouped together. The AE function is also specialized and AE’s only get involved once appointment is set.

Once closed, leads gets passed to learning and development team to do training and onboarding.

They don’t underwrite this cost with a setup fee to customer. Training is included in the recurring saas product fee an SMB or any customer pays.

DiscoverOrg CSM reps are quota carrying as individuals and as a group. There are many SaaS CEO’s incentivizing CSM”s like this today. If you’re not currently, something you should consider.

CSM’s are driven by retention targets.

A CSM that manages accounts where customers have more than 1000 employees have a quota target of 15% expansion. So $115 from $100 original accounts for example.

A CSM that manages customers with team sizes under 25 employees have a 90% retention target. This means keeping $90 on $100 original accounts.

DiscoverOrg upsells big longtail of SMB’s off # of users and amounts of data. These two pricing axis drive the majority of expansion revenue.

Henry gets pressured to go upstream all the time but has resisted. In fact 2018 was first year that DiscoverOrg had an enterprise sales team with a true land and expand strategy in place.

They’ll never give up SMB accounts. Henry tells his team “We’re going to do it, so must figure it out,” continuing “we help by giving them free access to email and dialing solutions and more consulting especially in the SMB cohort.”

This focus has helped the company scale to 4500 paying customers.

Henry is getting more aggressive on customer acquisition cost, but is currently spending less than $0.80 to get $1 in new ARR.

They certainly have the economics to do it.

Post ZoomInfo acquisition, revenues are $325m with a combined customer base of over 15,000 customers and 1020 employees.

Carlyle just bought out 30% of TA Associates stake and with PE 5 year time horizon, so doubt company getting any pressure from Carlyle to file to IPO.

That being said, if the economy stays healthy, net revenue retention continues to drive up past 100%, and ARR growth continues to grow at 35%+ yoy (its hard growing $300m!), I bet you see an IPO in mid 2020.

If they do, expect a day 1 market cap in $3-4 billion range… That is if Microsoft or Salesforce don’t pick them off beforehand at a multi billion dollar premium in the $6-8 billion range.