by Alan
in Uncategorized
9 min read
0

To read the Funnel.io story along with data from the largest 195 private SaaS companies (all $10m+ in ARR), get the new March issue of Latka Magazine:

Funnel.io is a marketing data platform, as the CEO Fredrik Skantze put it. It helps companies like Skyscanner, Samsung and Ubisoft pool their marketing numbers into one place so that it’s easy for anyone concerned to see the trends and generate reports. As of Dec 2019 they hit a $10m annual run rate ($833k/mo): 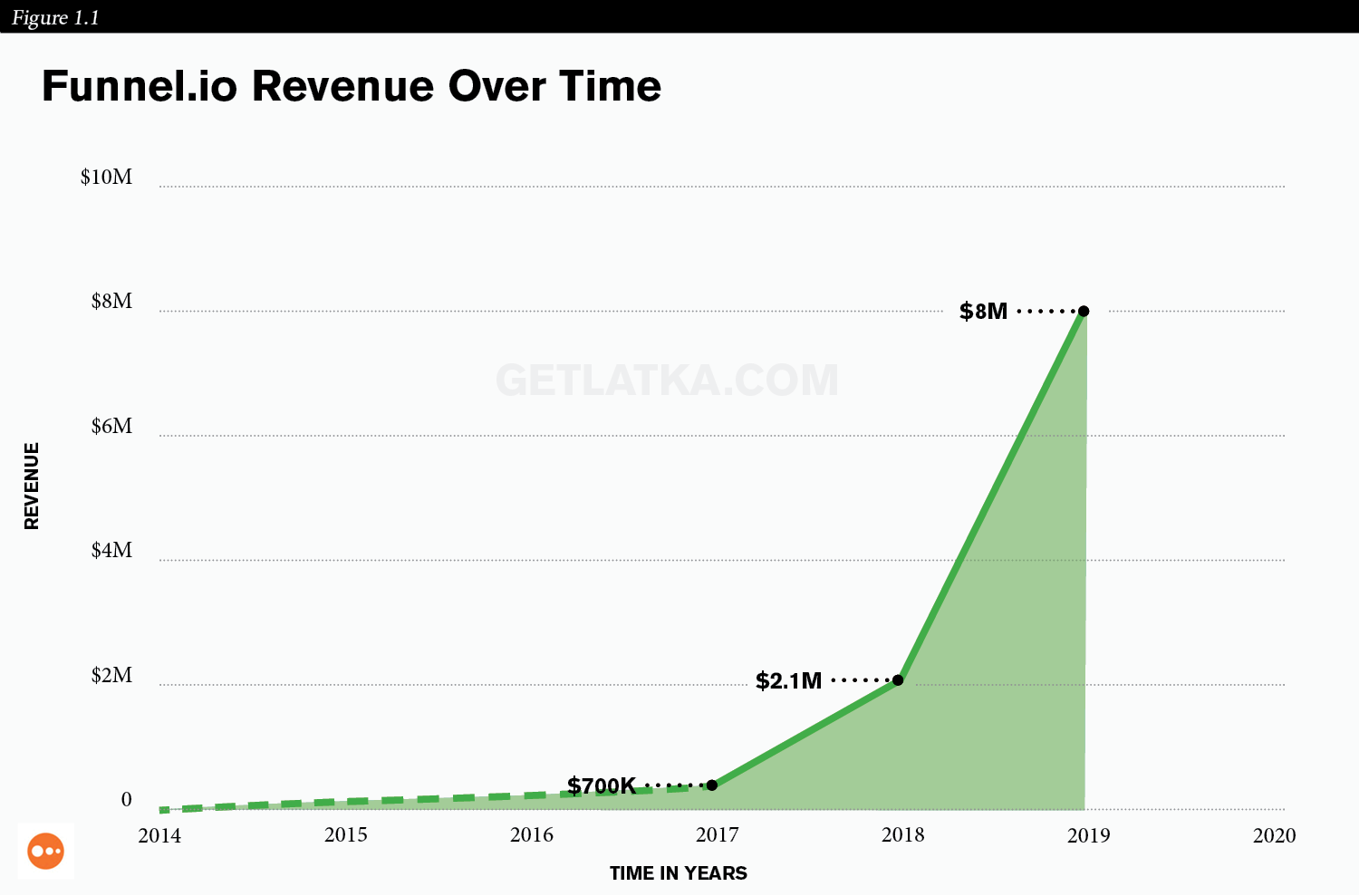 Traditionally, companies stockpile their marketing data from advertising platforms and Google Analytics into unreadable spreadsheets. This leads to all kinds of inefficiencies.

Besides its obvious caveat—that not everybody can read spreadsheets—the traditional way of documenting data is dangerously inaccurate, F1F9 research reports:

The Enron case study provides scary evidence of how systematically detrimental spreadsheet use can be:

Spreadsheets Are a Trillion Dollar Problem

The need to communicate marketing data across the organization is as strong as ever. A survey of 2,000 employees from the US and the UK revealed that roughly 80% of the workforce either “agree” or “strongly agree” that managers should share more information about the organization’s performance. The vast majority of employees said knowing how their company is doing makes them more focused, more motivated, more creative and less stressed.

Only 32% of respondents get to see company data more than once a week, while 17% say they have no clue how their company is doing. And, when the information is shared, it’s either via meeting, email or spreadsheet.

Safe to say, Funnel.io has plenty of problems to solve.

Funnel.io Provides an Alternative to Spreadsheets

At its core, Funnel is an intermediary between marketing data sources and data outputs. The sources are your marketing platforms: Google, Facebook, Twitter, Yahoo, Pinterest. At the moment, Funnel’s website says they support over 500 data source integrations. This means that wherever you’re advertising, you’ll probably be able to have Funnel read that data automatically.

The outputs are your ways of making sense of the data. Instead of just lumping everything into a spreadsheet and hoping the right eyes are trained in Excel-detective-work, Funnel offers three features that help spreadsheet readers gather the right insight:

The last time Skantze came onto the show in November 2017 their average customer value was $450. As of September 2019, they’ve more than doubled that, the CEO says. Safe to say the average customer pays Funnel around $900 per month nowadays.

The success is mostly defined by Skantze’s aggressive expansion towards enterprise clients, as opposed to SMBs. While they did not forcefully churn the smaller clients, their focus these past couple of years was solely on adapting to the needs of larger companies.

Skantze admits that the shift wasn’t a pure strategic play, but a transition largely governed by market forces. “As we became more established in the industry, as our product was more capable, larger and larger companies found us and wanted to do business with us. And then also having the capability to serve them,” the CEO explains.

Back in November 2017, Funnel served around 340 customers, most of whom were in the SMB cohort. Today, they have 700 customers, a significant part of which are mid-market enterprises.

A European company, Funnel has built an office in Boston for 30 of their employees. Their total team size is “just north of 100” people, 15 of whom are quota-carrying salespeople. 40-45 engineers are responsible for the actual product. 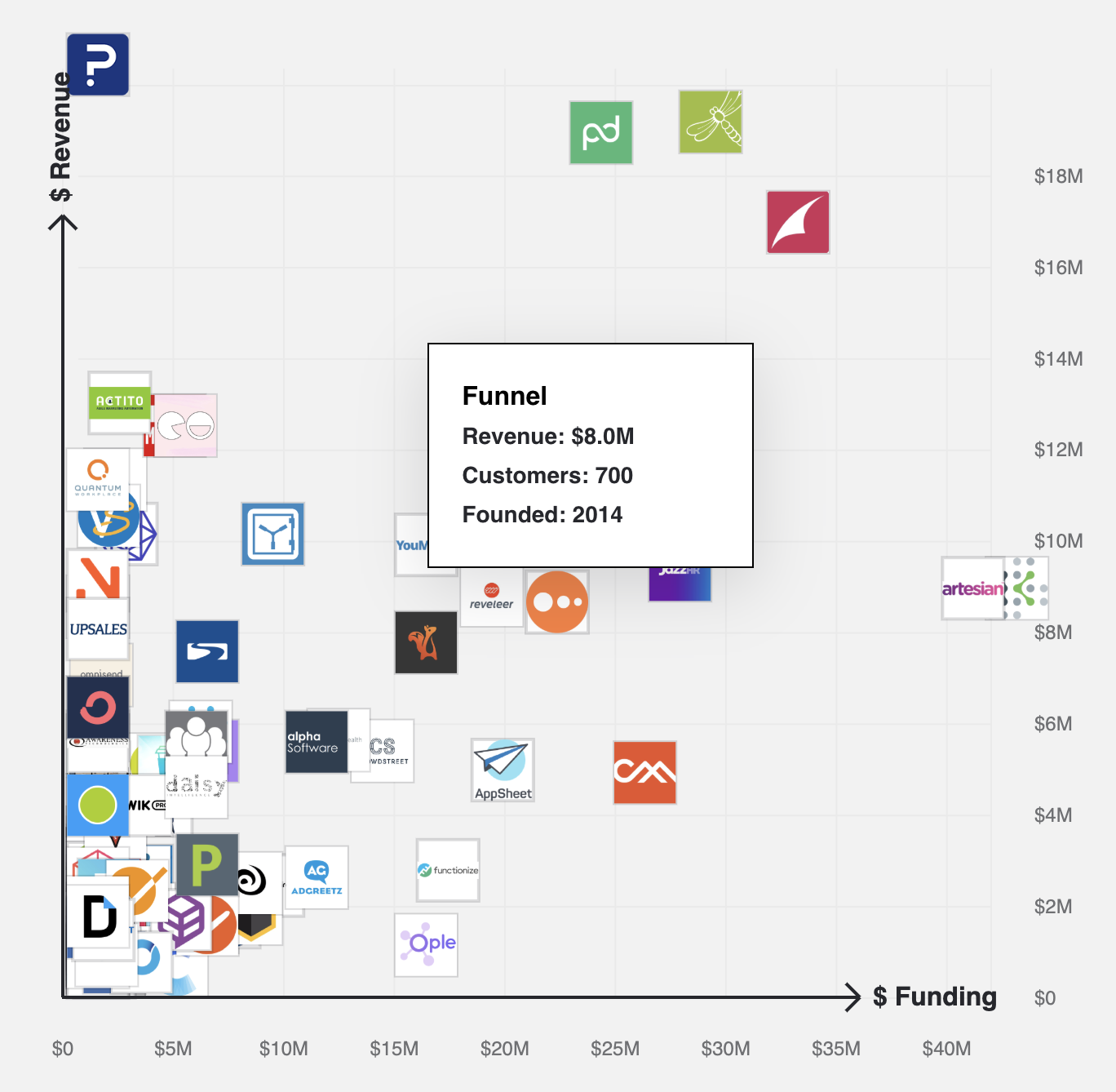 Running a mid-market company, the CEO seems pretty loose in terms of the actual quotas. “We think $5,000 in new MRR per salesperson is pretty good. That gives us a payback time of 12 months.”

In terms of customer acquisition cost, Skantze confirms that the company is happy to pay $12,000 for a new customer. The lion’s share of that goes to lead generation, the CEO says.

Search engine marketing is one of Funnel’s most successful lead generation funnels. When I asked the CEO whether they spend at least $100,000 per month on SEM, he nodded with “something like that.”

It takes 400 “dialogues” with qualified leads to convert 40 customers, Skantze says. “We have a dialogue with about 1,000 prospects every month,” the CEO says, “Some just want to talk, they’re not a good fit. You have to sift this through. [In the end,] it’s only 100 [leads] that are really high value.”

To put it in more traditional terms, Funnel generates about 1,000 leads per month in total, 100 of whom eventually become customers.

Funnel.io Competitors, CEO: “There are none”

In his 2017 Techcrunch interview, Skantze said “90 per cent of the time [our prospects] use Google Sheets or Excel for this and no other competitor is involved.”

In 2018, Funnel built an office in Boston to tackle the company’s geographical challenge. Their Boston sales representatives cover the US clientele, while their hometown headquarters cater to European and Middle East clients. “We don’t have a big presence in Asia at the moment,” the CEO adds.

Funnel differentiates clients not just by geography, but by potential lifetime value as well. If it’s a smaller lead, Skantze explains, they’ll strive to have fewer sales representatives working on it and make the process as automated as possible. “But if it’s a larger deal, then you want the whole team on that lead,” Skantze adds.

A now-established mid-market player, Funnel has plenty of room for expansion revenue, and they haven’t been watching grass grow. Their expansion revenue more than makes up for the 24% annual churn, Skantze says, with 0.5% net negative monthly churn.

Skantze points at increasing the average contract value. If you get through to a certain level of contract size, retention spikes. “Dealing with larger customers, then you have much higher net retention,” the CEO says.

Funnel does not currently have a CRM-esque model where they could sell those mid-market companies on a per-seat basis. “We have a model where we sell the platform the way it is,” Skantze admits. Instead, the company generates expansion revenue via selling additional features or usage. Ad dollar spend, data quantity and number of data sources are key factors in how much customers pay Funnel for their platform.

In November 2017, Funnel had raised $13 million in funding. By the end of 2018, the company had raised an additional $8 million. And, just this month, Funnel received a hefty $47 million Round B investment. 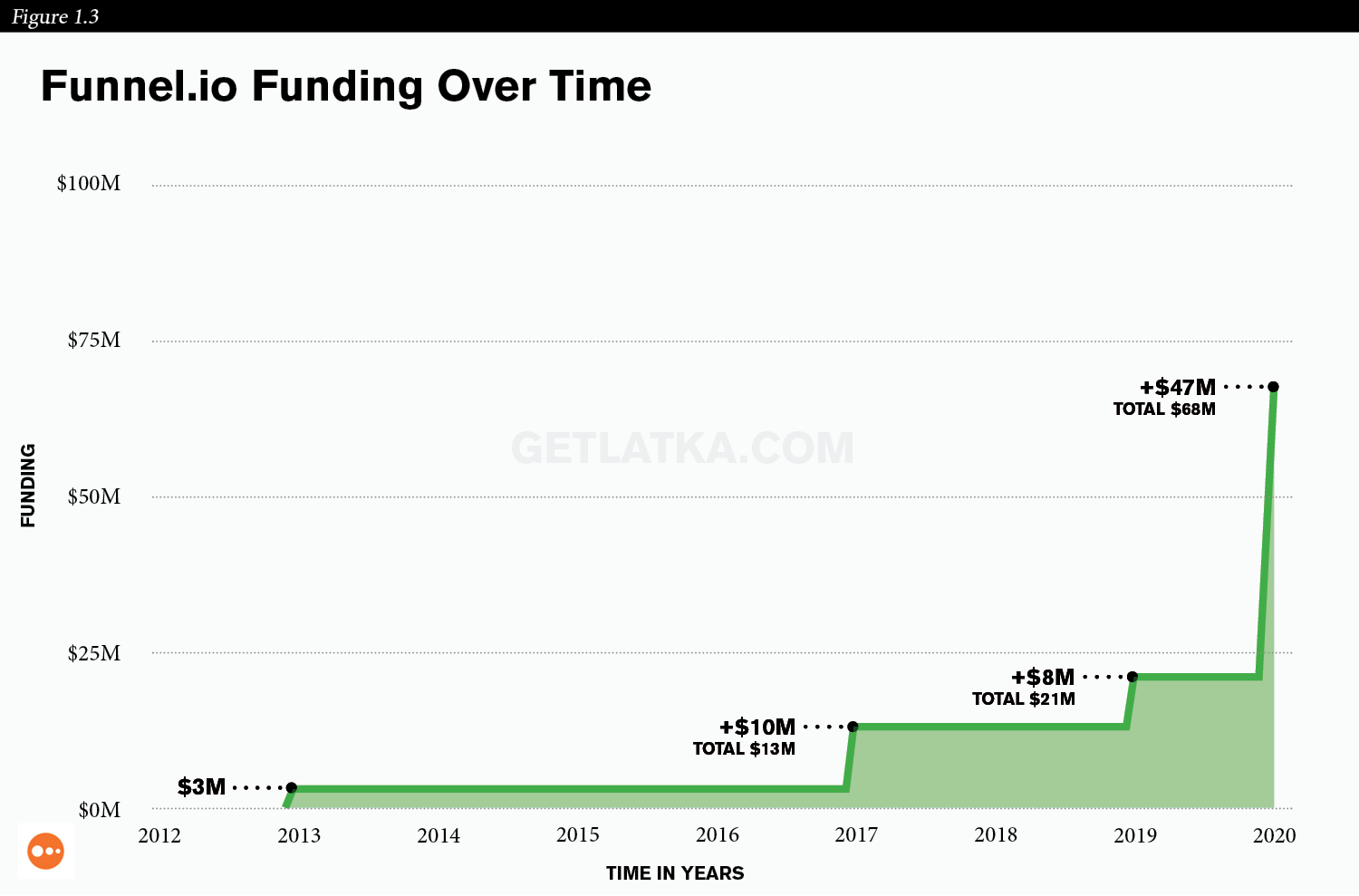 The $8 million equity investment, Skantze says, mostly went the product development side of things, to fund whatever their team of 45 engineers is up to. The CEO says they’re comfortable with an 18-24 month burn rate. Skantze confirms Funnel is burning around $400,000 per month.

700 customers paying $900 per month generate Funnel $670,000 per month, or just over $8 million annually. Compared to their $2.2 million annual revenue back in November 2017, Funnel has grown 4x over the course of two years.

When I asked the CEO whether he’d sell the company for $80 million in cash, he smiled and shook his head. 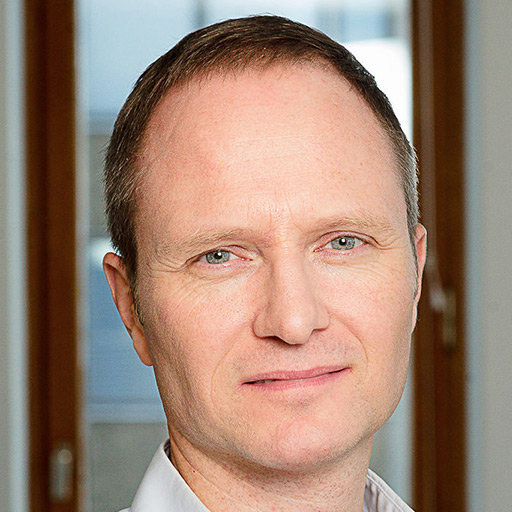 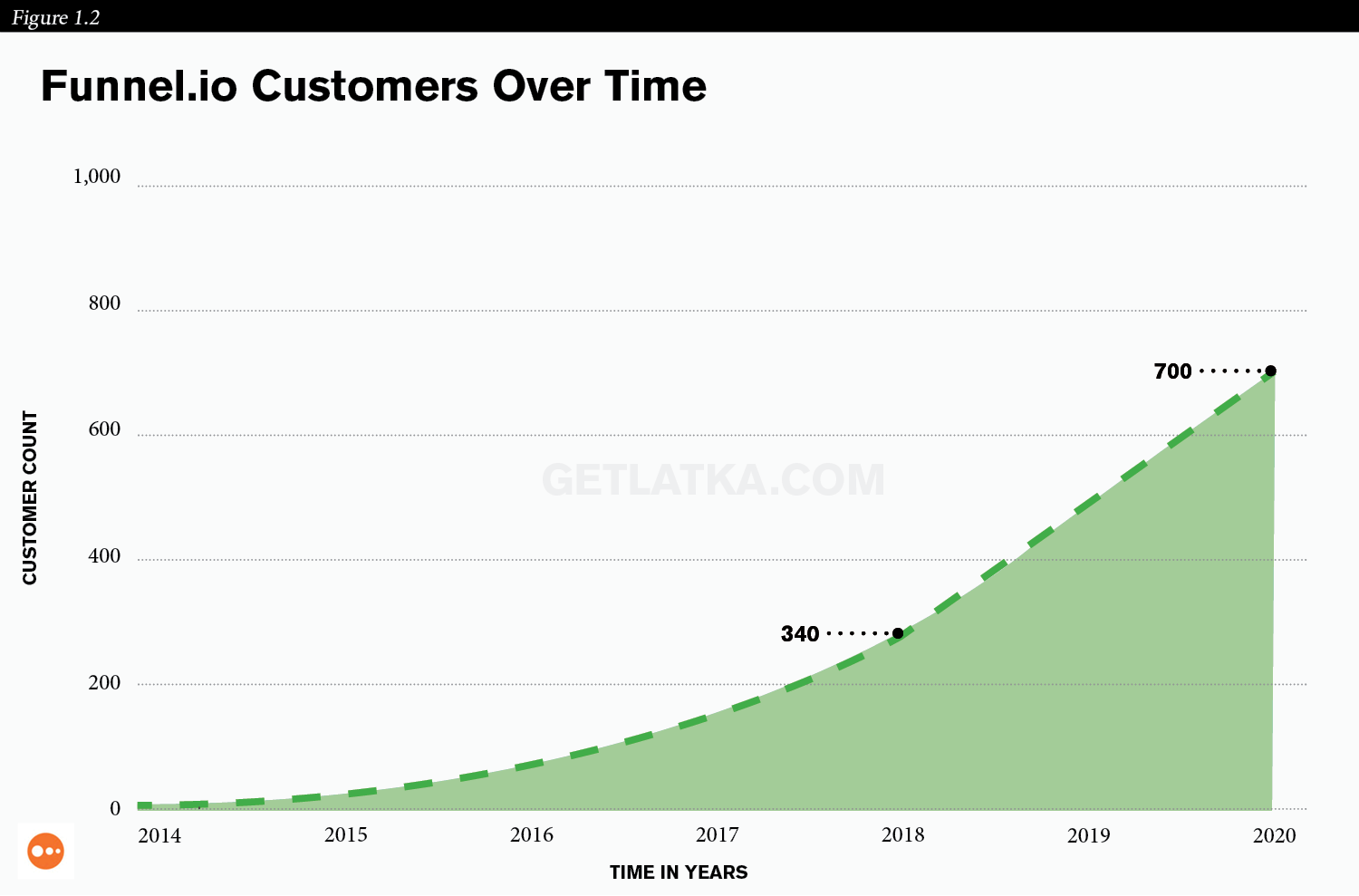