What is G2 Crowd?

G2 is a peer-to-peer review site headquartered in Chicago. The company, which was previously known as G2 Labs, Inc and G2 Crowd, focuses on aggregating user reviews for business software.

In 2017, TechCrunch called G2 the “Glassdoor for software reviews” after a series B funding round that netted the company $30m. That round included investors, including Accel and Pritzker Group Venture Capital, before raising a further $55m the following year.

Nathan Latka talked to G2 co-founder Godard Abel about the company’s history, recent valuation, and his hopes for a billion-dollar exit.

This company wasn’t built in a basement.

After selling BigMachines to Oracle for $400 million, Abel embarked on a new venture and launched G2 in 2012 with the BigMachines employees. He used millions of his own capital to start the venture.

Companies & users don’t pay for G2. So, how are they making money?

Everyone from companies to reviewers don’t have to pay a cent to use G2.

Companies can list their product for free, and Abel says he’s committed to keeping it that way. Companies are ranked based purely on reviews—not because a company has paid to be there.

“Slack has never paid us, but they’ve always been #1 rated on G2,” Abel says.

So, how do they make their money?

G2 offers subscribers a range of paid subscriptions that helps companies tap into their buyer’s insights.

Abel says if companies collecting reviews on the platform want access to marketing tools like analytics and information on who is shopping for products in their category—that’s when they have to pay.

The cost of the service varies on company size. Abel says for small vendors, the average cost is about $10k per year, while mid-market vendors pay anywhere from $30k to $100k a year depending on how many products they have on the site.

And enterprise companies like Salesforce, IBM, and Oracle that use G2?”Some of them are now spending over seven figures,” Abel says.

The founders built the bare bricks of G2 using their own money. $2 million of it.

Abel says, in the beginning, venture capitalists didn’t like the company as it didn’t have a revenue model.

And although G2 had four funding rounds between 2013 and 2016, none of them hit double figures until their Series B in 2017.

Abel says, for now, the company isn’t looking to raise any more money, and they’re not interested in acquisition.

Getting their first customers was “really painful”

He remembers the experience of trying to get G2’s first customers on board as “really painful.” He said the only reason the company succeeded at the beginning was the fact that the founders were already successful entrepreneurs.

Now, the company has 20,000+ paying customers. Although the Average Revenue Per Customer (ARPU) varies wildly as G2 caters for SMBs and mid-market to Enterprise companies, it averages at $1,666. Thanks to its Enterprise customers, though, the Average Annual Contract Value (ACV) sits at nearly $20k. 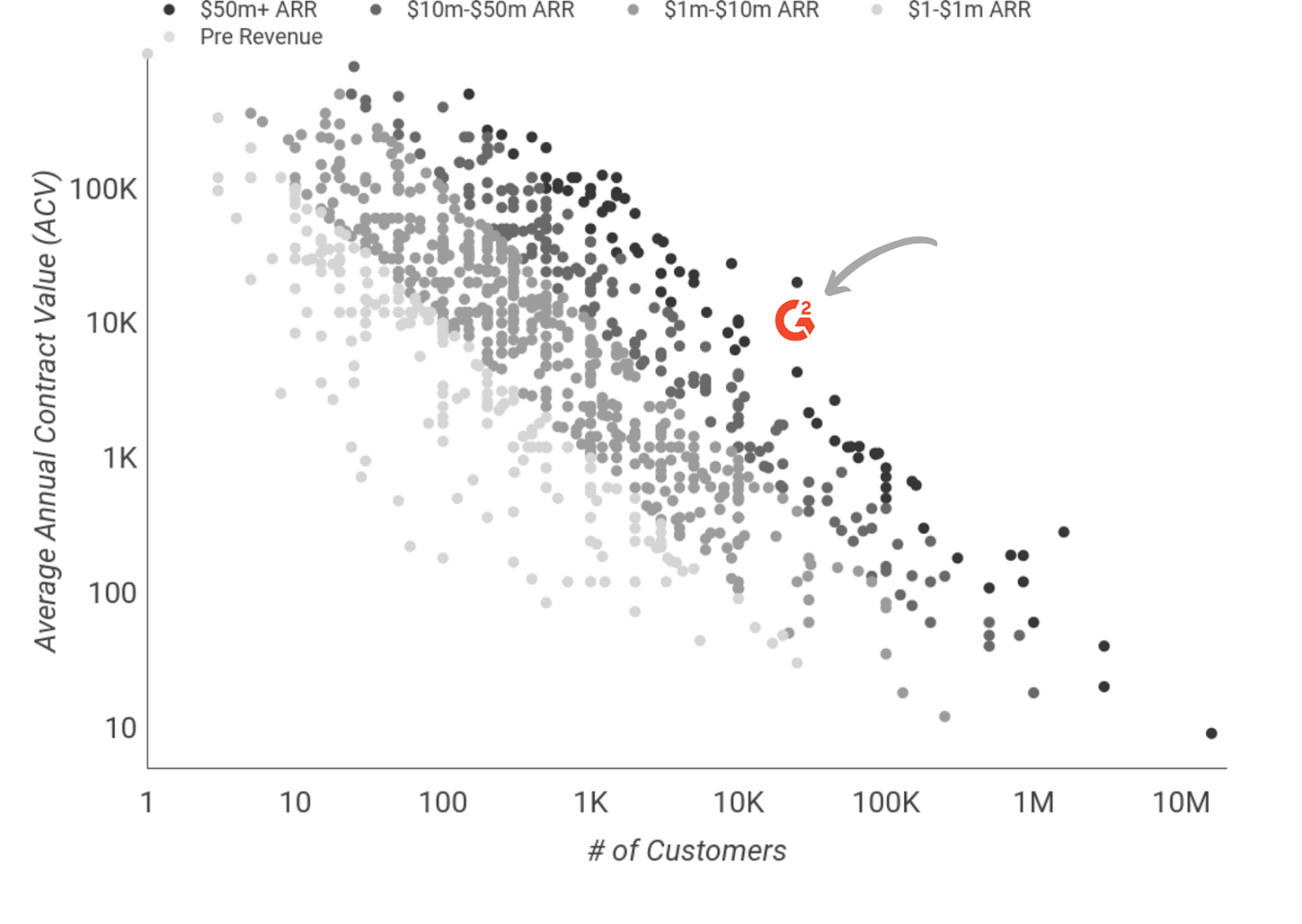 For example, Abel says companies like IBM have hundreds of products, so they pay more to access premium services. It’s this model that allows G2 to keep a stronghold and create recurring revenue.

After the October 2018 funding round, Abel says G2 was given a valuation of “a half-unicorn.”

“I want to be a full unicorn,” Abel joked when Latka interviewed him.

With 2017 revenue hitting $11m, the company is confident they will finish 2019 with $50m+ revenue on its books. However, one of G2’s most promising figures is its Net Revenue Retention, which is sitting at 130%.

As we’ve spoken about in other articles where we’ve profiled promising unicorns like GitLab, Net Revenue Retention is a key indicator of a SaaS company’s health. Anything under 60% and its game over. But if you start hitting 130%+, things get interesting. Recent IPOs such as SmartSheet, Alteryx, and Box all had Net Revenue Retention rates between the 130-136% mark.

And what were those companies valued at IPO?

Of course, there’s more than just Net Revenue Retention that goes into an IPO valuation. However, it’s generally a healthy way to predict a company’s growth, and it’s clear G2 is sitting in the sweetest of spots right now.

According to Abel, G2 won’t be selling. Not even if Salesforce of Microsoft made an offer.

“We’re not selling to anyone,” he repeated during the interview, only hinting at selling to “public markets.”

So, the company has its sights set on an IPO and achieving its “full unicorn” status.

But the reason behind their unwillingness to sell runs deeper than that. I believe there is a consensus that it would be unethical for G2 to go down that path. As a company that prides itself on being unbiased, selling to anyone with a vested interest would go against everything they’ve built.

As Abel summed up, G2 likes to be neutral to the world of technology.

“We’re all about authenticity.”

You Can Hit $10M in ARR With No Expansion Revenue!?