As more companies serve more customers via the cloud, customer success has taken center stage over the past 3-6 years.

Gainsight is looking to continue branding the space while also leading with products that help companies be more customer centric by driving activation, expansion, and retention.

Many people have speculated about Gainsight’s revenue, customer count, and other figures. I wanted to clear things up so invited CEO Nick Mehta on my podcast The Top Entrepreneurs to discuss.

The first line of Gainsight code was written in April of 2012 and first dollar of revenue came 12 months later.

Over that period Mehta and team focused on getting the UI right to land their first customer: Marketo.

Marketo led to Xactly, Box, and many other early enterprise customers.

Today, 700 companies pay north of $100k on average to use the Gainsight Customer Success Cloud.

Most of the early expenses had to do with teaching the world about this new category of customer success.

Fortunately, Mehta raised early on to support this early burn. To date, the company has raised $155 million dollars.

Do Your Customer Success Reps Have Quota Targets?

Several SaaS CEO’s in the $50-100m revenue range have had success driving net revenue retention north of 130% by incentivizing their customer success reps with commissions.

Mehta shared they don’t do this today but are looking at it.

How’d you get your first 10 customers?

Dan Steinman bought Gainsight to use internally at his, then employer, Marketo. The deployment was so successful, Gainsight recruited Steinman who serves today as Chief Customer Officer.

In addition to Marketo, Box, and Xactly were early customers.

“In all of these examples, the community is very tight. These companies know each other and if you perform for one customer, you quickly expand to others,” says Mehta.

Additionally, companies like GE and ADP along with others that are moving into the software/cloud space are using Gainsight.

Gainsight is spending 16-18 months of LTV on landing these big enterprise deals.

What Was Gainsight Gross Revenue Churn Over Last 12 Months?

Mehta says gross retention annually is in the 90%’s and has been over the last 4 years.

They driven this retention by being more prescriptive with customers versus just doing what customers ask for. Gainsight has created a periodic table of “solutions” that they prescribe into accounts to drive adoption and customer value.

They don’t upsell based off different products or value based metric. Most of the upsell revenue comes from seat expansions as different teams in specific companies onboard the Gainsight technology.

With 700 employees and $50m+ in ARR the company is generating north of $71k in ARR per employee (below public SaaS averages of $189k).

The company is burning between $1-2m per month right now mainly due to headcount.

Gainsight is monitoring their E40 metric (rule of 40) which adds free cash flow margin to growth rate. Any number above 40 is strong. 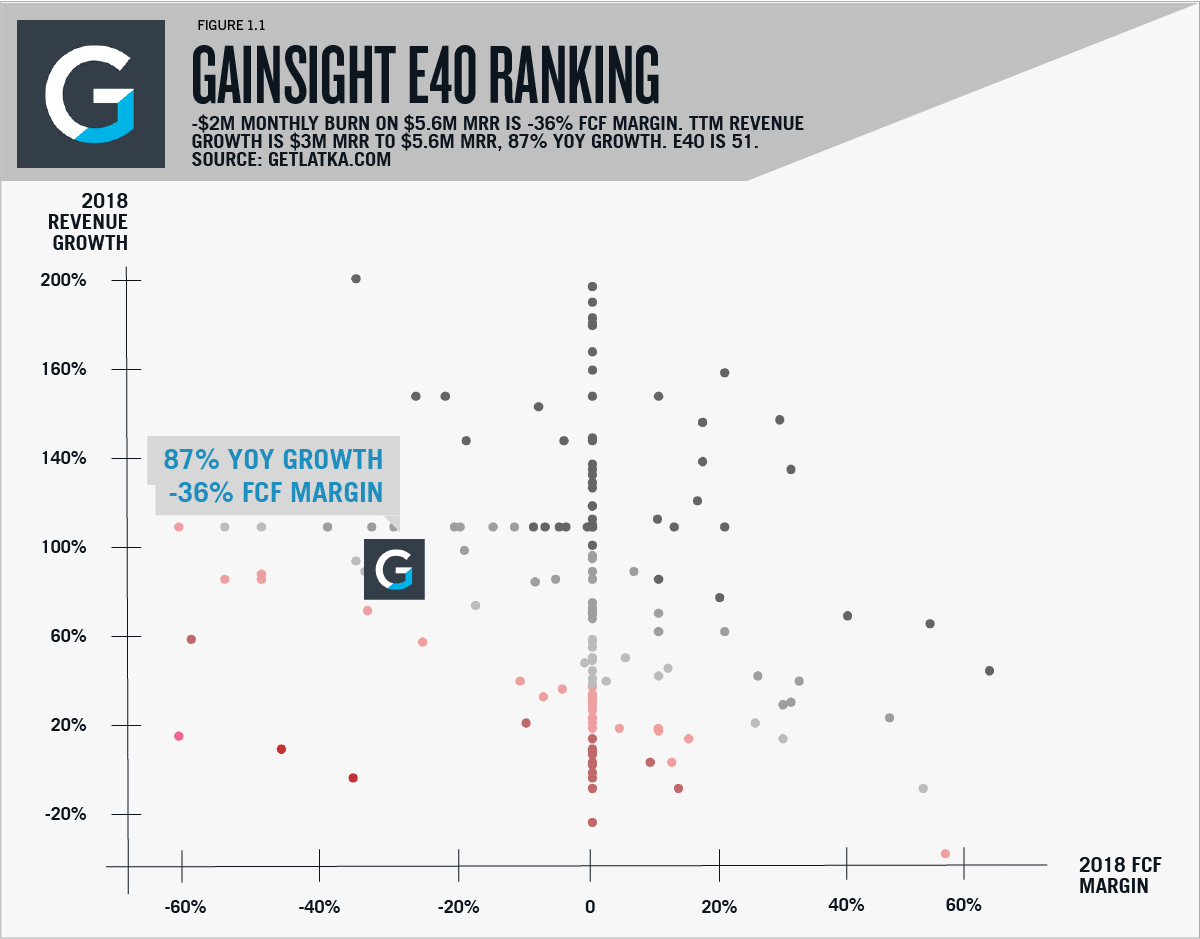 Will Gainsight IPO in the next 2-3 Years?

“IPO is not the goal,” says Mehta.

“Our big strategic move right now is moving from one product to a suite of product. Reggie at CVent used this strategy and it did well,” he continued.

The average customer spending well into the six figures. With 700 customers paying an average of $100k/year, the company is north of $50m in ARR today.

Why hasn’t Gainsight sold to Vista?

Vista is a big partner for Gainsight. So much value that PE firms get from their portfolio companies comes from the companies ability to drive expansion revenue.

I wasn’t sold on this because you typically see VC backed companies “do something” every 16-20 months after their last raise. This could be another raise, an exit, or a shutdown.

Gainsight last raised $52m in 2017 with Lightspeed. All of this cash went to operations – no secondary.

Today, Mehta insists he’s not selling, and not thinking about doing a secondary to provide early shareholders with some liquidity.