Companies like $50m revenue Zapier, the pipelines of the internet, are taking off today for good reason.

I put Snaplogic, Mulesoft, Elastic.io, Workato, Segment in this category as well. They all help businesses connect their various applications, documents, databases, and processes.

Today, you’re seeing a new trend of tools get hot that bring all these business functions into one central workplace. I’d put Airtable, Notion, and Coda.io in this category.

Yesterday, I sat down with Shishir Mehrotra, Co-founder of Coda.io – the better funded but lower revenue competitor to Notion – to discuss channels he used to grow, how he plans to launch pricing to slow down his $1m/mo burn rate, and how he measures churn and activation in a freemium model.

You Raised $25m On Day One. Is This Another Silicon Valley Hype Story?

“We started the company in 2014 to create a new kind of document that allows you to pull in tasks, typically reserved for apps, in a streamlined way where no coding is required”, said Mehrotra.

The Coda founding team had significant experience that allowed them to raise $25m in one weekend with a pitch deck made of 69 product mock up screenshots.

The round was led by Greylock and General Catalyst. Shishir had launched and sold a company 20 years prior then ran Microsoft office, and ran operations at YouTube growing it from tens of millions in sponsor deals to a $1b run rate 3 years later.

In 2015 Khosla and NEA led the second $35m round. Mehrotra says that today, most of the $60m in funding is still in the bank. How’d it all start?

ProductHunt and Reddit have been major sources of growth for Coda in terms of new user signups. Every major new product feature has been launched on ProductHunt:

They also creatively use ProductHunt to launch templates tied to relevant news, like their main investor launching a new book: https://www.producthunt.com/posts/measure-what-matters-starter-kit

Other channels include a Sub-Reddit that covers Coda updates. 170 members follow.

Additionally, many hyper specific forums are driving Coda users where forum posters are searching for ways to “manage fitness routines” or “manage a product launch”.

The team had fun hacking together this bell which rang every time a signup happened:

Getting users is one thing but in a freemium model activation is what matters.

How Does Coda Get New Users To Stick Past 14 Days?

To drive this retention, Coda thinks about onboarding in 3 phases.

The first is the 2 week trial period.

To drive this activation, the 2 week trial is hyper focused on getting new signups to share a document as quickly as possible.

Every CEO and founder should have this sort of simple metric during onboarding. Simplicity means focus. Focus means more likely to win.

The third phase measures how the tool spreads in an organization. How do makers bring on their teams?

Today, 1 maker on average shares with 10 people on their team. Of the 10 invites, 3 turn into makers. This cycle continues until the majority of a particular company is signed up.

Coda has tens of thousands of makers and editors using its platform today.

How Do You Measure Churn in a Freemium Model?

“Churn is very low after first 2 week trial period. Each month we’ll see 1-2% of active users churn off or about 20-30% on an annual basis”, says Mehrotra.

This has allowed Coda to grow user base fairly rapidly. Here’s a shot at one of the first onboarding steps: 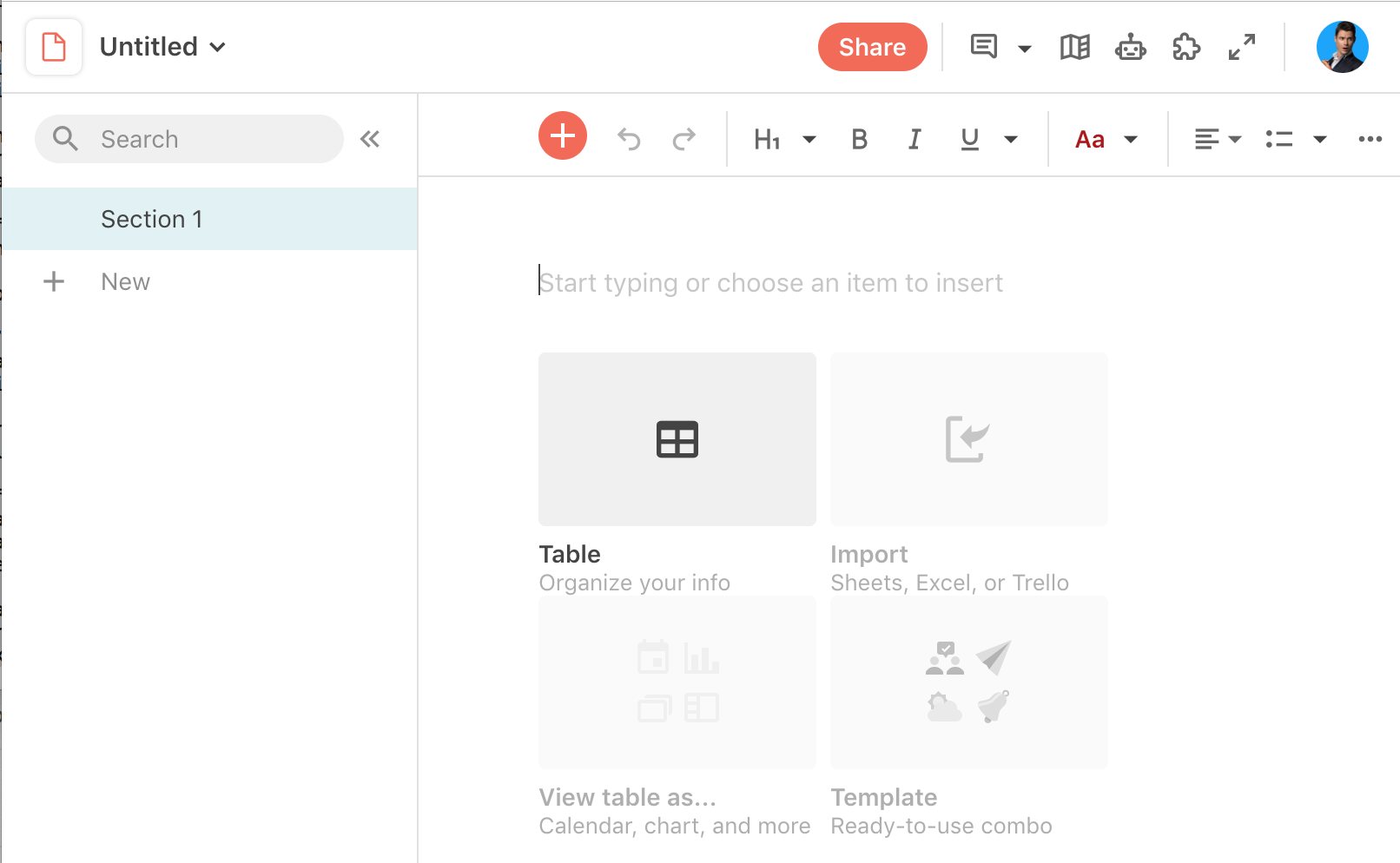 You Have No Paid Customers and $60m Raised?

So far Coda has focused on reducing friction to use as much as possible. This has put pricing plans on the back burner for the past 4 years.

In the next few months the company plans to launch Workspaces and pricing. Pricing will be tied to number of active workspaces.

Additionally pricing won’t be tied to total number of users on the platform. Instead, they’ll price per number of creators – users who created a doc – and editors will be able to continue using for free.

After pricing launches, Coda will experiment more with paid spend which historically has been $0.

That being said, most freemium models need to hit 10m+ monthly active users to start to see billion dollar sort of network effects.

Coda isn’t near 10m MAU’s so how do they avoid a down-round?

How Much Revenue Do You Need to Avoid Down-round?

The first line of code was written 2014 right after the $25m raise.

The beta launched in late 2017 and Coda grew to 100 companies very quickly.

The majority of their $60m in funding has been spent on development. 70-80% of the team were engineers through 2018. 50 people today as they look to scale hiring in areas like customer success, and growth.

Mehrotra says that Coda has plenty of capital and will not raise in the near future. They will likely raise again at some point to keep funding growth and believe they’ll be able to do it at a healthy valuation because of the strength of the adoption curves within companies.

The ratio right now is about 8:1 to 10:1 in terms of Editor:Makers using Coda within a single company. This ratio matches what Mehrotra saw during his time at Microsoft when he was working on the Office product (before his YouTube days).

In the meantime, Coda will continue to face headwinds in the red hot space from companies like Notion and point solutions connected by popular apps like Zapier.

If you’re playing in the same space as Coda, how can you take advantage of their funding and growth?

How You Can Get Rich Off Coda

I’ve seen many applications take off because they married a whale by launching apps or templates in the whale’s app exchange, or template directory early on.

Troops is currently doing this with the Slack App Exchange, even joining Slack on the stock exchange floor on IPO day.

The Coda app ecosystem is relatively healthy for a company with under 100k DAU’s: 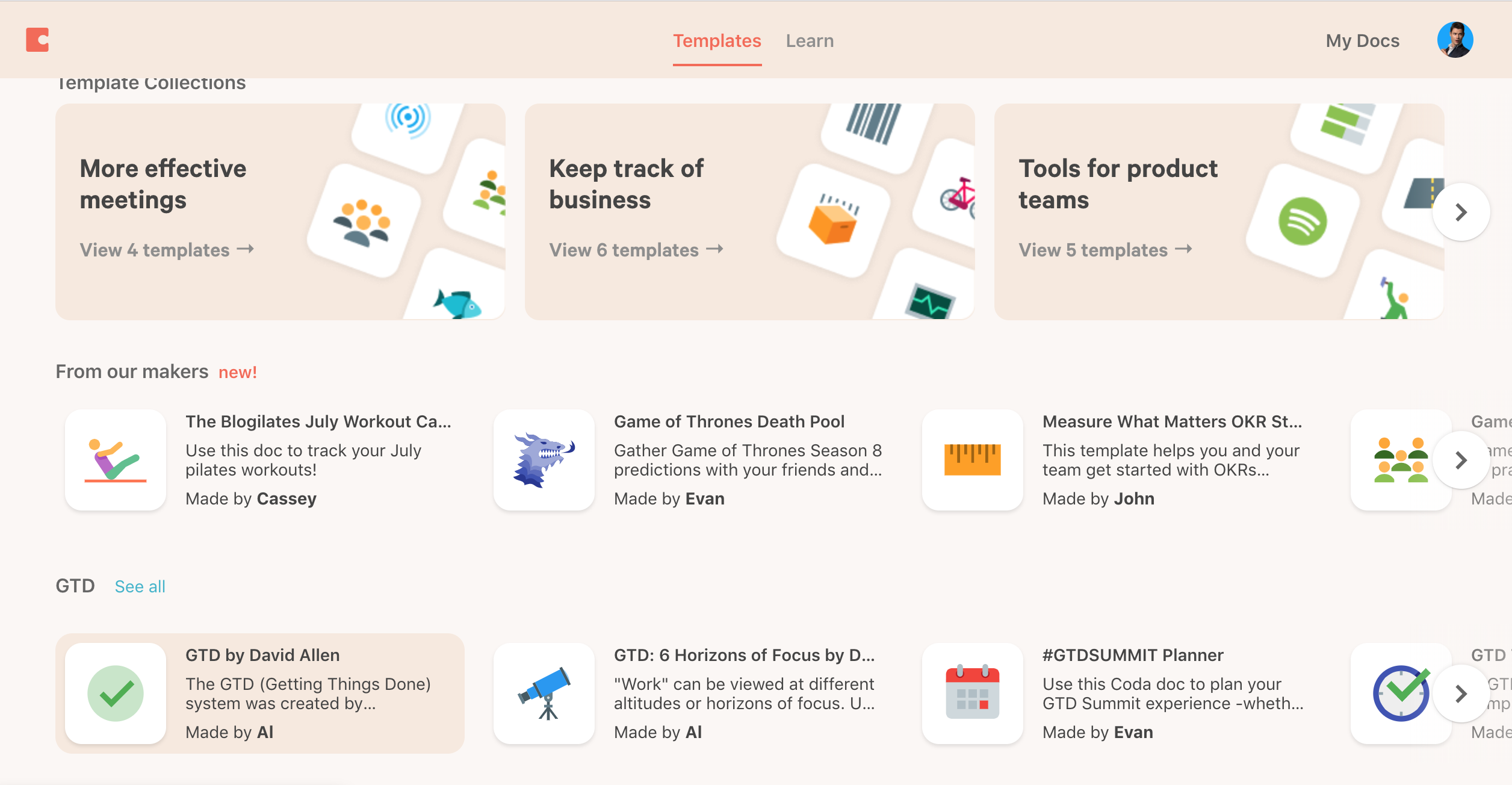 If your businesses touches the task management space at all, I’d recommend launching a template into the Coda Template gallery quickly. With $60m raised, a large userbase, and a paywall about to be introduced, I think you’re going to see them convert 10%+ of their free users to paid fairly quickly.

Take advantage of them taking off by being first in their template gallery. 3 years from now, they’ll be asking to acquire you (see Intuit acquires #1 App Exchange Listing, $30m ARR TSheets for $340m+).

The data for this article was collected via my call with Coda founder Shishir Mehrotra for my podcast, The Top Entrepreneurs:

Why Algolia, $40M in ARR, is at 120% Net Revenue Retention Annually