by Alan
in Uncategorized
10 min read
0

On March 23, the day the Covid-19 lockdown was announced in the UK, Zoom was downloaded 2.13 million times, compared to their regular 50,000-ish a day download rate. From university lectures to church services to blind dates to stag dos, the world has dodged the self-isolation communication challenge like a boiling hot F1 car, and they chose Zoom as their weapon of choice. These are busy times for Zoom’s headquarters as their user base grew from 200 million to 300 million in a matter of days. With a $50 billion evaluation, Zoom is now worth more than 7 biggest airlines combined.

But we’re biased creatures, and we tend to tunnel vision on the winner, thinking that the second place does not matter. Loom, Zoom’s not-so-distant cousin, is an asynchronous video communication app, designed to fulfill the need to communicate visually, but not live. Onboarding videos, product demos and things like recorded coaching sessions are stored on Loom indefinitely, accessible via password given to the recipient, who can leave comments at specific time stamps or take notes.

Traffic to the 4 year old Loom.com shot up from 3.5 million in February to 19.9 million in April, and we can only wonder what’s been happening to their analytics in May. One thing we do know is that Loom just raised a $28.75 million Series B round under a $350 million valuation. Our host Nathan Latka sat down with Loom’s co-founder Shahed Khan to learn the story behind the headline.

Loom positions itself as the alternative to Zoom calls or “screenshots with arrows,” as the co-founder put it. Latka, who buys and sells companies for a living, noticed Loom as one of the juiciest bites on the market. One thing he does when scouting for companies is go to the Google Web store, sort all apps from highest user count to lowest, and if the update date by the developer was more than a year ago, Latka renders the company inactive and worthless. Loom was exactly the opposite of inactive or worthless by Latka’s standards.

Back on February 21, 2019, Loom had 1.2 million active users. Based on website traffic— and assuming their conversion rate hasn’t changed—Loom should be somewhere between 5 and 8 million users in May 2020.

But that number could easily be higher because of Loom’s built-in virality mechanism. When someone sends their coworker a Loom video, the branding is all over the place. Unlike someone like Wistia—a highly militarized marketing video system that leaves no trace behind—a user is clearly aware he’s watching a Loom video when he’s doing it. From the logo to the Chrome extension to the time-stamped comment section to the 5 video speed settings to the notifications when someone has seen your video—Loom is hard to confuse with something else.

It is for that reason, Khan says, that Loom’s main growth channel is pure word-of-mouth. Someone sends someone else a Loom video, they like it, they get curious, and, when the need is there—they remember it.

But Loom’s co-founders aren’t exactly civilians themselves. Once the video starts, a free user is prompted to sign up to one of Loom’s paid plans. The $5/mo option will give you drawing tools and CTAs. The $15/mo plan will give you custom branding and robust engagement analytics. And the $45/mo Enterprise version offers a fully combat-ready remote work machine, enhanced by Single Sign-Ons (SSO,) SCIM and Advanced Security Controls.

Back when Loom was at 100,000 users, the co-founders successfully sparked the growth by rolling out a referral program. Bring your coworker to Loom—get $5 in Loom credits. This wasn’t as much a $5-per-lead play, the co-founder says, as it was an attempt to build the critical mass of free Loom users within a company. Once enough employees start using the app “organically,” the bosses have no option but to accept Loom as the default method of communication within the organization. 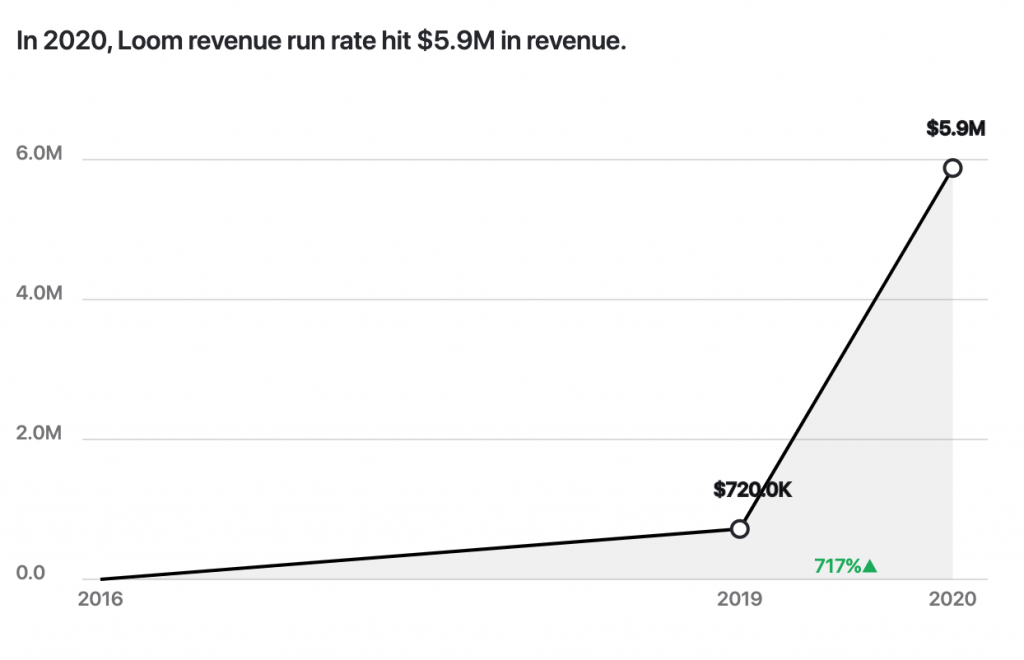 Khan also hired a growth hacking engineer whose job was to “launch experiments every week.” Since word of mouth is Loom’s bread and butter, most of those experiments were focused on the customer journey after they get sent their first Loom video.

Does the user respond better to a prompt to record their own video, or when they’re offered to create a to-do list based on the video? How do different prompts perform on different types of videos—like lectures, job walkthroughs and product demonstrations? These are the questions Loom’s growth hacker was tasked to test on a weekly basis. 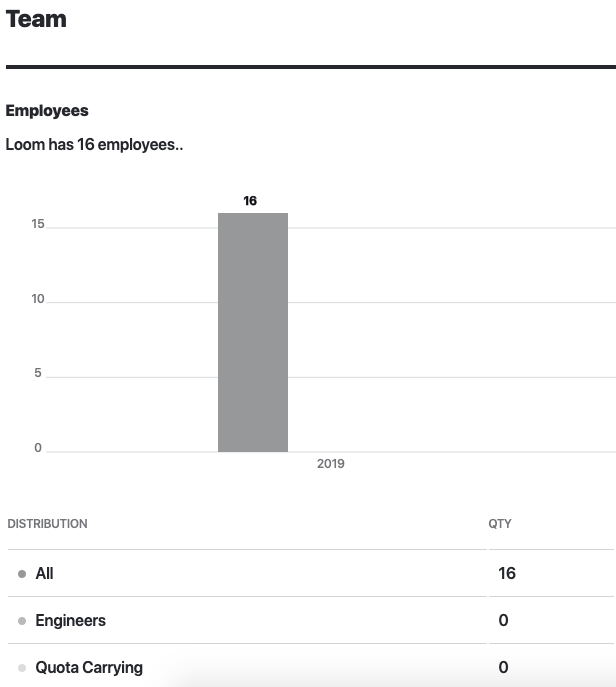 The strict testing quota led the hacker into unexplored territories. Since Loom is primarily a Chrome extension, they tested things like setting prompts within people’s cumbersome emails. “It’s like ‘hey, we noticed that you spent a lot of time drafting an email. Just record a Loom video, it will take you 2 minutes to convey your message,” Khan reveals.

At one point, Loom rolled out a feature where anyone using the Chrome extension would automatically get a prompt to record a Loom video when composing an email. The video would then insert natively into the email. For recipients with the Loom Chrome extension, they would be able to watch the video within the actual email. A strong incentive to sign up. And for those who didn’t have the Loom extension—which was most people—an automatic thumbnail would offer to fix the issue in no time.

How does Khan know what to test? He looks at what’s happening within B2C markets. Consumer apps, he says, are a couple of years ahead of B2B apps in terms of how users actually use the features. Instagram and Snapchat, for example, showed the co-founder that it is “socially acceptable to pull out the phone and record yourself speaking.” And, on a more macro level, direct voice and video calls have been gradually replaced by messaging, video and audio recording and other asynchronous communication in the B2C market. 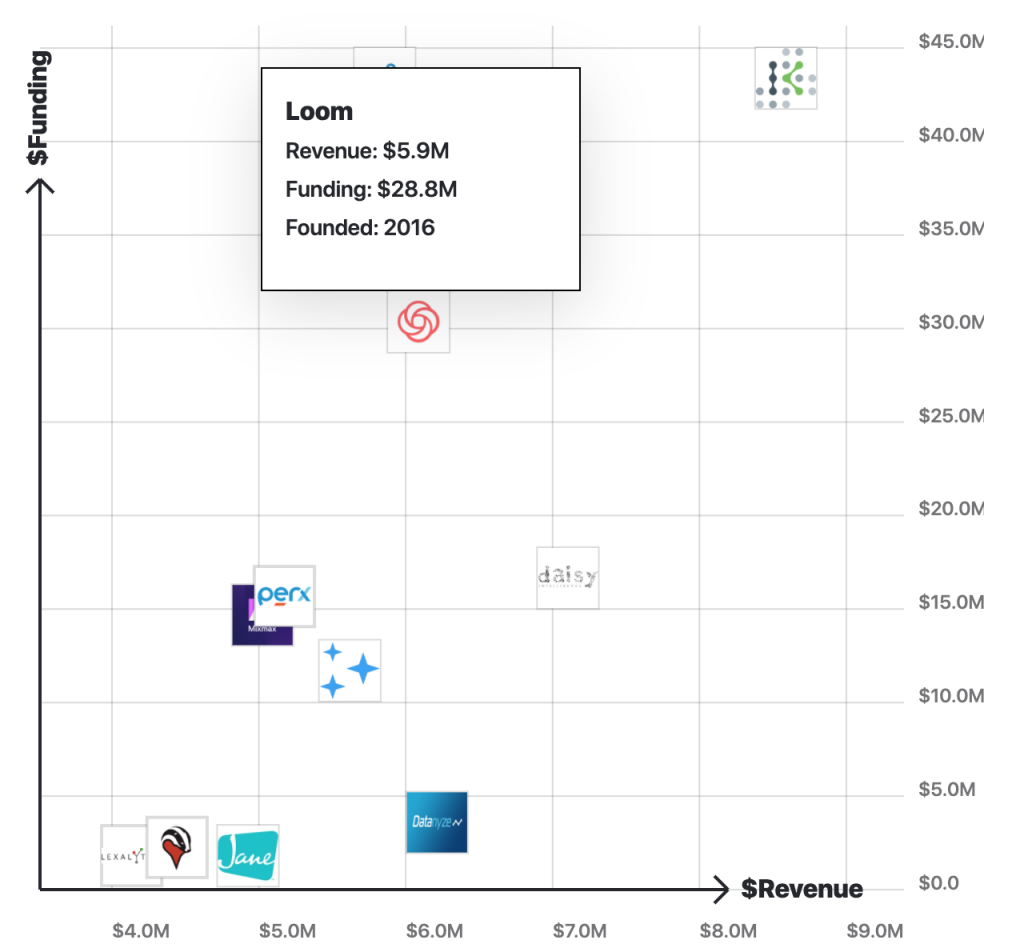 Founded in 2016, Loom is still very much focused on user growth. They’ve been playing around with different ways to convert word-of-mouth users into sign ups, and they haven’t invested a single penny into paid marketing.

Loom only launched their first premium plan, the Pro, in February 2019—before that, the app was free for all users. Much like any great product designer, Khan spent the bulk of his company’s infancy trying to perfect the core mechanic, the video recording and playback tool. He tested fast and he tested big. Only when all user feedback and test results morphed into a coherent product-market fit did Loom start bringing in additional paid features, such as the ability to add a CTA button at the end of your video.

The grand freemium to paid challenge is the Achilles heel for many startups. They raise some cash, build an enormous user base with perfectly engaged customers, only to screw up pricing.

One thing that Khan did is to perpetually hype up their existing user base via pre-launch marketing of the initial Pro plan. That alone meant that 3% to 4% of freemium users upgraded their freemium accounts to Pro, which cost $10 per month at the time. Which, in turn, meant $60,000 in monthly recurring revenue right off the bat.

The other thing they did is to put in triggers that lead customers onto more rigorous team-based management and communication tools, like shared to-do lists. As a freemium tool, Loom was extremely individualistic: you log in with your Google account, you have your own library of recorded videos, and the only way you can share those videos is by sending someone a direct link.

Collaboration functionality is the main selling point for Loom’s premium plans. Instead of sending individual files and folders, coworkers can now engage the video material in shared team workspaces.

But as soon as you start talking collaboration software, you’re venturing into the territory of heavily-funded behemoths like Monday. And it’s not an obvious decision whether you should. So why didn’t Loom just stay in its video-recording-and-API lane?

Khan says it’s less of a competition and more of an integration. “Companies similar to Monday” have reached out to Loom co-founders, saying they want to have Loom as an integration within their ecosystem. The decision makers at Loom interpreted this reaction as a strong indication that some collaboration capacity was definitely desired in combination with what Loom already stood for.

You may be wondering how Loom was able to do all the growth and testing for 3 years before launching their first paid product. The beginnings were humble. Khan and his co-founder lived in a single room in San Francisco back in 2016.

Two friends spent three months building Opentest, a website engagement monitoring app, which failed to find its market. They pivoted twice, yet found no success. By the time they were running out of cash, the co-founders knew they had to “come up with some Hail Mary.”

It was then that Khan had a revelation. When monitoring their visitors via Opentest, users would record their screens and send those videos to their coworkers via—you guessed it—a built-in Chrome extension.

Loom had 20,000 paying companies back in February 2019. As for any freemium model, it’s crucial for them to monitor which of their users are active and engaged, and which are not. Khan separates their customers into two categories: video recorders and video viewers. Besides the velocity of actual videos recorded, Khan also monitors the average viewing times, number of emojis replied and depth and number of comments left under the videos.

The originally bootstrapped company did eventually venture out to raise funds. With their recent $29 million raise, Loom has about $75 million in venture capital in total.

It’s not difficult to justify the raise. As a blue ocean product, Loom needed to make a big splash to become relevant. That takes money. Nor Khan nor his co-founder had any money left, so they had to look for partners.

“Relevant” is a weak word for what Loom is today for some companies. It became a solution to a problem people didn’t even know existed. Through their rigorous testing of new features, Loom perfected their formula to a point where most users can’t help but sign up after watching their first video. That’s how in just 1.5 years, Loom expanded one of its customer companies from 20 users to over 1,000.

Reflecting back on his success, Khan says it was this widespread adoption within entire departments of large organizations that positioned Loom—seemingly a consumer product—as the next big B2B SaaS. It was exactly this positioning, the co-founder believes, that enabled Loom to raise $11 million just a few years into the startup. 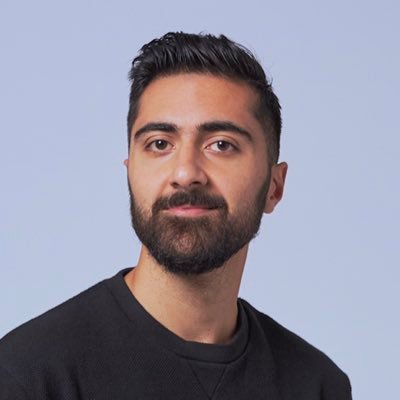