Monday.com launched in 2014 after CEO Roy Mann left his CTO position at Wix. Today 80,000 organizations across the globe use Monday.

Initially doing business under the name “DaPulse”, Mann is a technical founder and a firm believer in product first.

He mentions in an interview back in 2016 that his employees have an almost emotional connection to customer success.  Is that an exaggeration? Maybe, but there has to be something unique in the way Monday does business that has catalyzed their rapid success.

Nathan caught up with Mann from his home in Tel Aviv, Israel – the headquarters of Monday.  According to Mann, he had six cups of coffee in preparation of being on the interrogative end of Nathan’s energy. (They had fun!)

Monday’s product is a team management tool designed to improve work processes in organizations of all sizes.  At this point in time the Human Capital Management sector saw loads of startups aiming to make the modern workforce more efficient through software tools.

At the time of the interview they already had 5,000 paying customers with a team of 37 people.  Customer organization size and ARPU across the board varies widely, but Mann estimates that ARPU is $864.

The cost of acquiring those customers is $600 with a payback period of only eight months.  With an average lifetime value of a customer being $3,600, the LTV to CAC is a very healthy 6:1.

Companies that have that high of an LTV/CAC often raise significant amounts of capital to take advantage the high rate of return in order to grow quickly.  For SaaS businesses revenue growth rate is the most important data point in determining a valuation multiple.

At this point in Monday’s history they were at $4.3M in ARR and had raised $9M, $7.6M of which came in a month before the interview.  Would they raise more to take advantage of their high return customer acquisition economics?

A little over a year later and Monday tripled their customer count and ARR to 15,000 and $13M respectively. That’s top quartile growth.  How’d they do it?

Mann told Latka they have had success using Instagram to sell to corporate clients.  Using a $1.5M a month online marketing budget they use an internal business intelligence engine to track ROI on each individual marketing campaign.

Mann explains they do this by hooking up their spending to the API’s of Facebook or Google.  If the ROI is positive, they deploy more capital into the campaign. The BI engine is called Big Brain.

Gross logo churn is between 1.5% and 2% monthly or about 20% annually. (Check out our guide to churn management).  Net revenue retention is just over 100% which means expansion revenue from existing customers is roughly 20%.

A few months before this interview they raised another $25M from Insight Venture Partners which was used to scale the team to 70 people split evenly between engineers, marketing, and sales.

How does a company go from $13M ARR to receiving a $1.9B valuation is just two years? 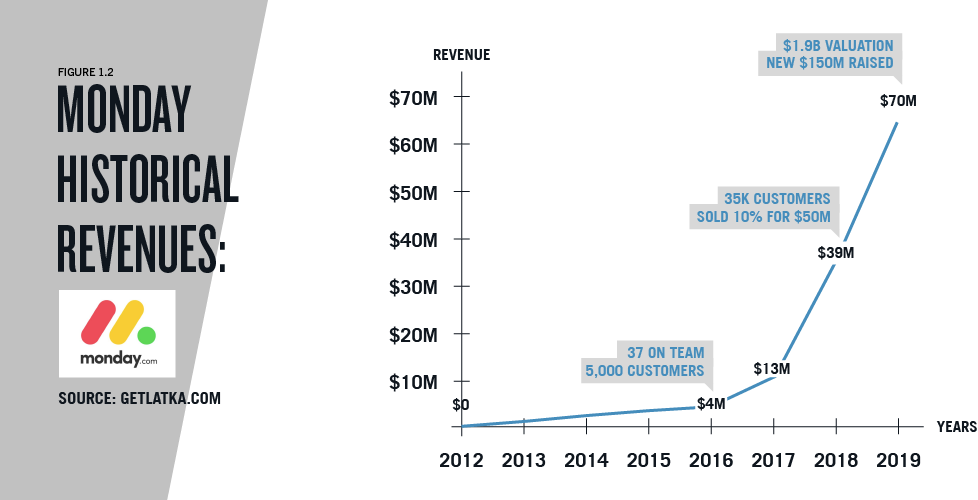 In the time period between Latka’s last interview and this raise Mann and his team scaled their list of customers to 35,000.  Again growing at an impressive clip of roughly 230% YoY.

If they increased their revenue at the same pace as customer count they would have been at $30.3M ARR.  $30.3M in revenue and a $520M valuation means they received a 17x + revenue multiple. 17x for SaaS businesses at scale growing this quickly is certainly not unheard of, but very large nonetheless.

At this point in 2018 there were several large workplace collaboration tools in market including Slack, Basecamp, and Asana among others.  One thing that may differentiate Monday from other companies in the space is that Mann says 70% of their customer base exists outside the tech world.

Because of this, he explains that his competitors are essentially excel files and white boards, not the other software tools in the space.  Their client base is more diverse, and just as likely to be an interior design firm as a tech startup in the Valley.

This product versatility could explain the rapid growth in revenue and high customer conversion.

Israeli’s Most Recent Unicorn Monday.com Gearing Up For An IPO

Just last week, Monday announced its largest funding round yet at a whopping $1.9B valuation.  This is nearly 4x the value they received just a year ago. In this time they increased customer count to 80,000 over double what it was last year.  Revenue likely increased at an even faster clip because of upsells and going further upmarket into enterprise.

If revenue grew at the same rate as customers they would be at $70M.  I’d wager that they are closer to $80M-$85M. At a $1.9B valuation that means that they received somewhere between a 22.4x and 23.8x revenue multiple.

Mann, confident in his vision and his team’s capabilities says that Monday is only at 1% of their potential.  With the existing Fortune 500 customers, fast growth, scale, and profitability, Monday is on the fast track to an IPO.

The blueprint has been set by the market leader Slack, Mann just has to follow suit.  Other companies in the space such as Airtable and Notion will also likely try to follow Slack’s lead.  However, Mann explains that that there is plenty of market share for all of them to be tremendously successful.

Here are Latka’s predictions on which 100 SaaS companies are most likely to IPO in the near future.