by Kimberlee
in Uncategorized
8 min read
0

Fomo is a social proof marketing platform that helps businesses get the traction they deserve through instant social proof.

The platform integrates into a company’s tech stack and shows live purchases, subscriptions and reviews to other customers. The result is an urge from other customers and visitors on the site to make the same purchasing decision, in fear of missing out (Fomo!). 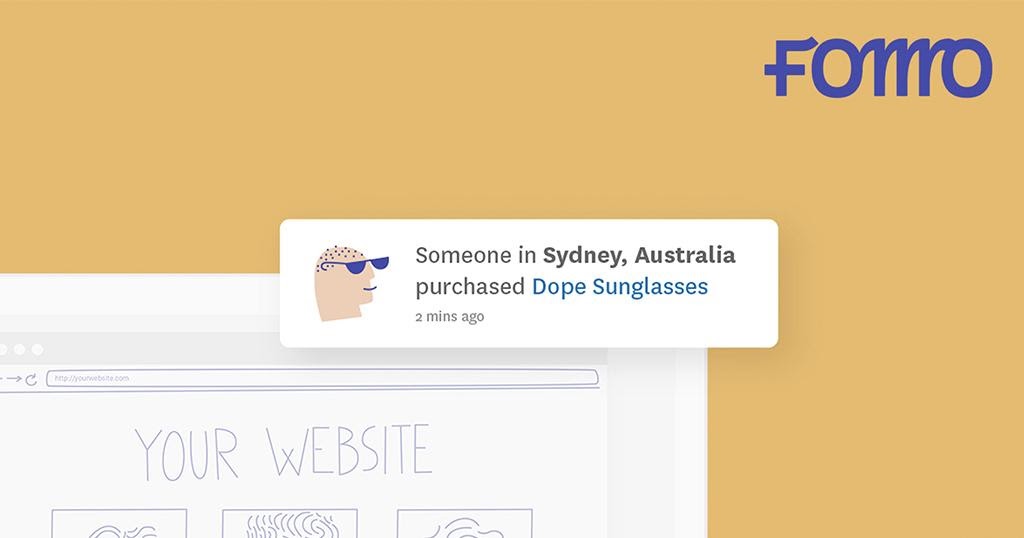 Nathan talked to the company’s founder Ryan Kulp about his background in VC and how he has built Fomo from side hustle to $1m+ in annual revenue.

How does FOMO make its money?

Fomo, founded in 2016, is a marketing tool that drives online sales through credibility and trust using social proof.

The clue is in the name. Fomo stands for “fear of missing out” and encourages customers to make a purchase by displaying when others are buying products at the exact time they’re on a website. The platform works by adding a single line of code, which then shows recent customer behaviors and drives conversions.

The founders of Fomo have also realized that integrations are essential in today’s online website tech stacks. The tool has more than 90 native integrations, including big players like Stripe, Eventbrite, Mailchimp, Zapier. It also has an API and custom webhooks, so it’s customizable and will work on any site.

Currently, Fomo is actively used on 12,500+ websites including Martha Stewart, Goldbely, and Leadpages.

Fomo was originally known as Notify

Fomo wasn’t always Fomo. When Kulp first found the platform while working at GrowthX VC firm in California, it was called Notify. 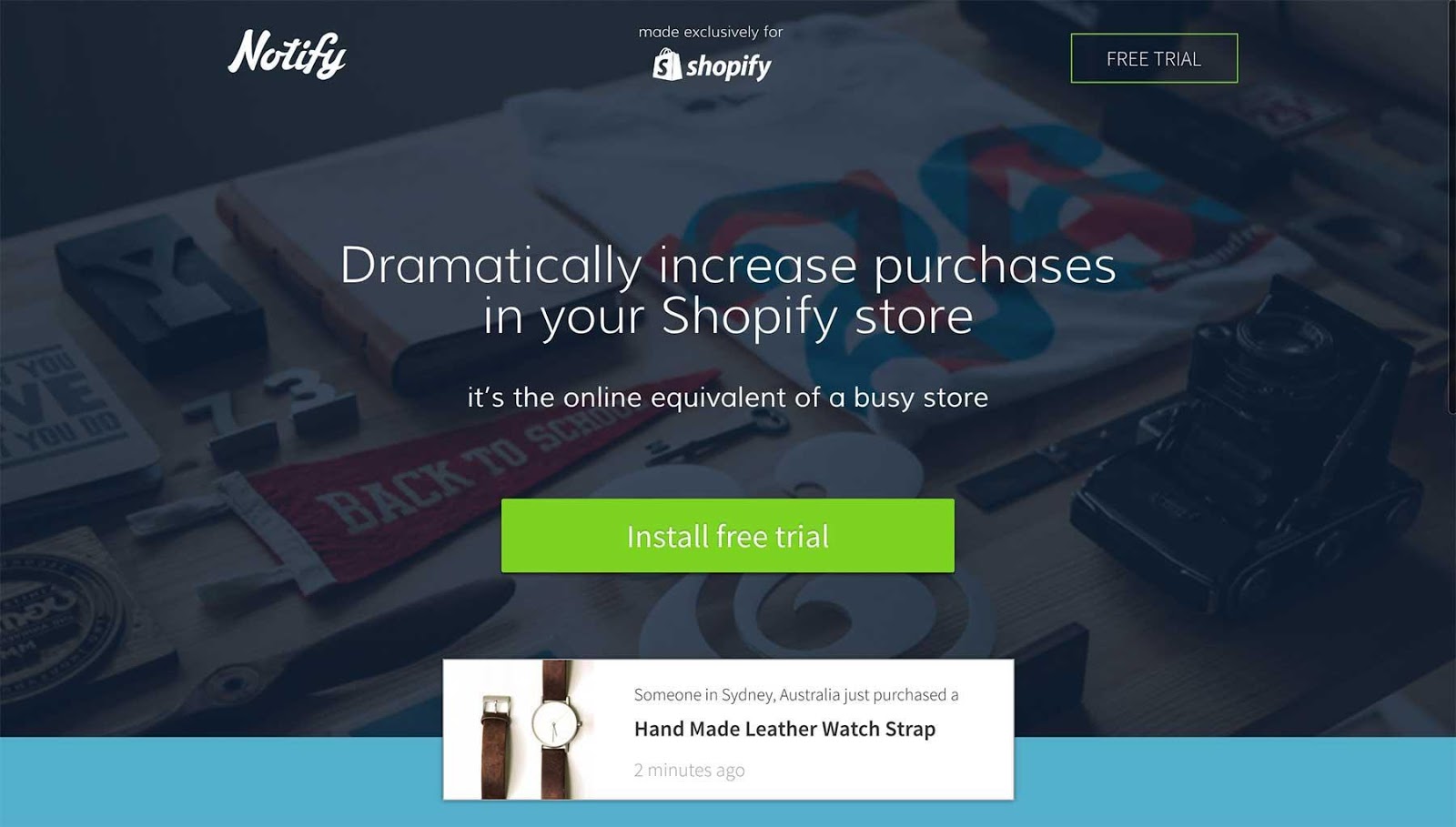 Once Kulp witnessed the platform in action, he installed it on the site, Kettle & Fire. The results—a 40% lift in conversions and $1,400 in extra sales—compelled him to reach out to the founders of Notify and introduce himself.

Kulp then reached out to his friend Justin Mares about the possibility of Notify selling, and he had an idea—“we should buy it.”

Just over a month later, Kulp and Mares purchased the app (using none of their own money – more on that later), which had roughly 800 customers and $15k/mo in revenue, and shortly after rebranded it to Fomo.

Once it was in their hands, they started to rebuild the app while keeping their day jobs. At the start, the two looked at Fomo as nothing more than a side hustle and only dedicated 1-2 nights/week to hacking on it. Then, Meredith Corp (owns Martha Stewart) signed up to the app and the servers crashed during Black Friday due to traffic.

It was this wake-up call that pushed the two to start looking at the tool more seriously.

In 2019, the company launched its third product

The plugin tracks what products are selling as well as any reviews, and then shows them on the store’s screen. 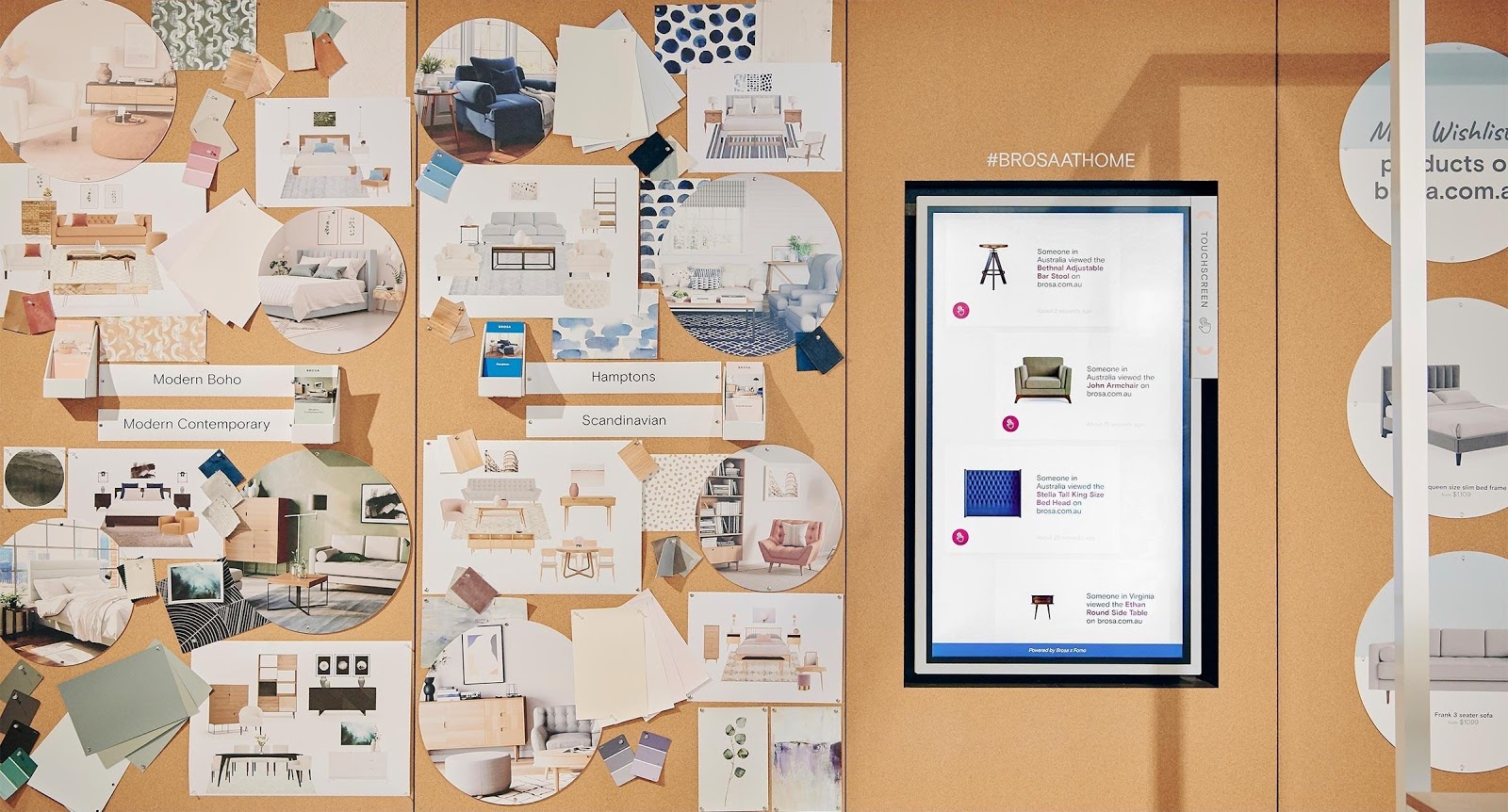 Kulp says Fomo Storefront enables customers to have another level of social proof to aid in their purchasing decisions that were not previously available.

Fomo was purchased using seller side financing, which Kulp says is a “magic trick” for anybody who has yet to try the style of funding.

“You don’t have all the cash upfront, you pay it back over time,” he says.

Kulp says the seller side financing deal allowed them to buy the company without outside financiers. Here’s how the scenario played out in a similar style to Fomo’s purchase:

“The monthly payments were similar to the revenue, and we were able to grow it just above-board of our monthly service payments,” he said.

There was only one time where company cash flow didn’t cover the monthly payment. Kulp and Mares each put in $1500 to cover the payment with $3k of their own cash. If they hadn’t the company would have defaulted back into the previous owners hands.

Kulp and his team then spent $50-70k to rebuild and rebrand the company to Fomo. Kulp knew the original code of Notify only housed a few dozen PHP scripts, so they hired a dev shop to build Fomo “version 1.0”. The rebuild took four months and cost roughly $50k.

The entire $50k was put on a Chase Credit Card, which had no interest for the first 12 months. Kulp says credit arrangements like this are a good option for bootstrappers if they’re responsible and careful.

“They act sort of like venture capital, getting you over the product-market fit hump, investor-free,” he said.

They paid the $50k off before interest payments started kicking in.

When Kulp took over Fomo, the platform’s 800 or so customers were paying between $4-$14.99/month for their subscription.

The pricing model meant the customer base was bringing in roughly $15k in Monthly Recurring Revenue (MRR) a month. In 2017, Fomo changed its pricing plans, so they ranged from $11.99 to $750, with most users paying between $29-49. Here’s how the changes affected their MRR: 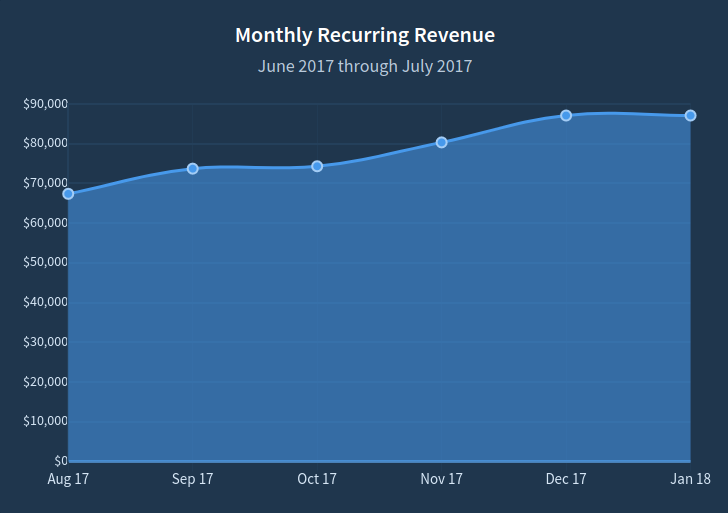 Now, the company’s pricing model spans across 25+ different plans from $19/month to $2k/month for Enterprise customers. Their customer base has grown to 5,000+ paying customers, now bringing in between $90-$97k in MRR.

The growth is fuelled by the company’s focus on selling annual plans. A single annual plan for one of Fomo’s larger customers brings in several thousand dollars in additional revenue in one click, which is a bonus for cash flow.

Kulp says adding value to Fomo’s existing customers to increase the company’s Average Revenue Per User (ARPU) rather than doubling its customer base was also key to growth.

19% Churn Was Killing The Company Early On

When Kulp purchased Fomo, the monthly customer churn rate was sitting at 19%.

The new owners had no idea if the churn was a bug in the app, or if it was because the software was ineffective.

To figure out why they were losing so many users, Kulp installed Mixpanel and set up a drip sequence that educated new signups on the benefits of Notify. An automated email was also set up in case a customer cancelled their subscription to see why they had deleted the app:

These small tweaks meant that within 30 days of buying Notify, Kulp and his team were able to grow revenue by 7%.

Every Fomo employee is an engineer

What’s interesting about their employee numbers is that each and every one of them is an engineer—even the designer. Because of the company’s revenue numbers, they can definitely afford it. On average, the company makes $135k in revenue per employee, which puts them in a sweet spot compared to other bootstrapped SaaS companies.

Fomo is pulling in more than double the benchmark of $60k per employee with their current staff numbers. 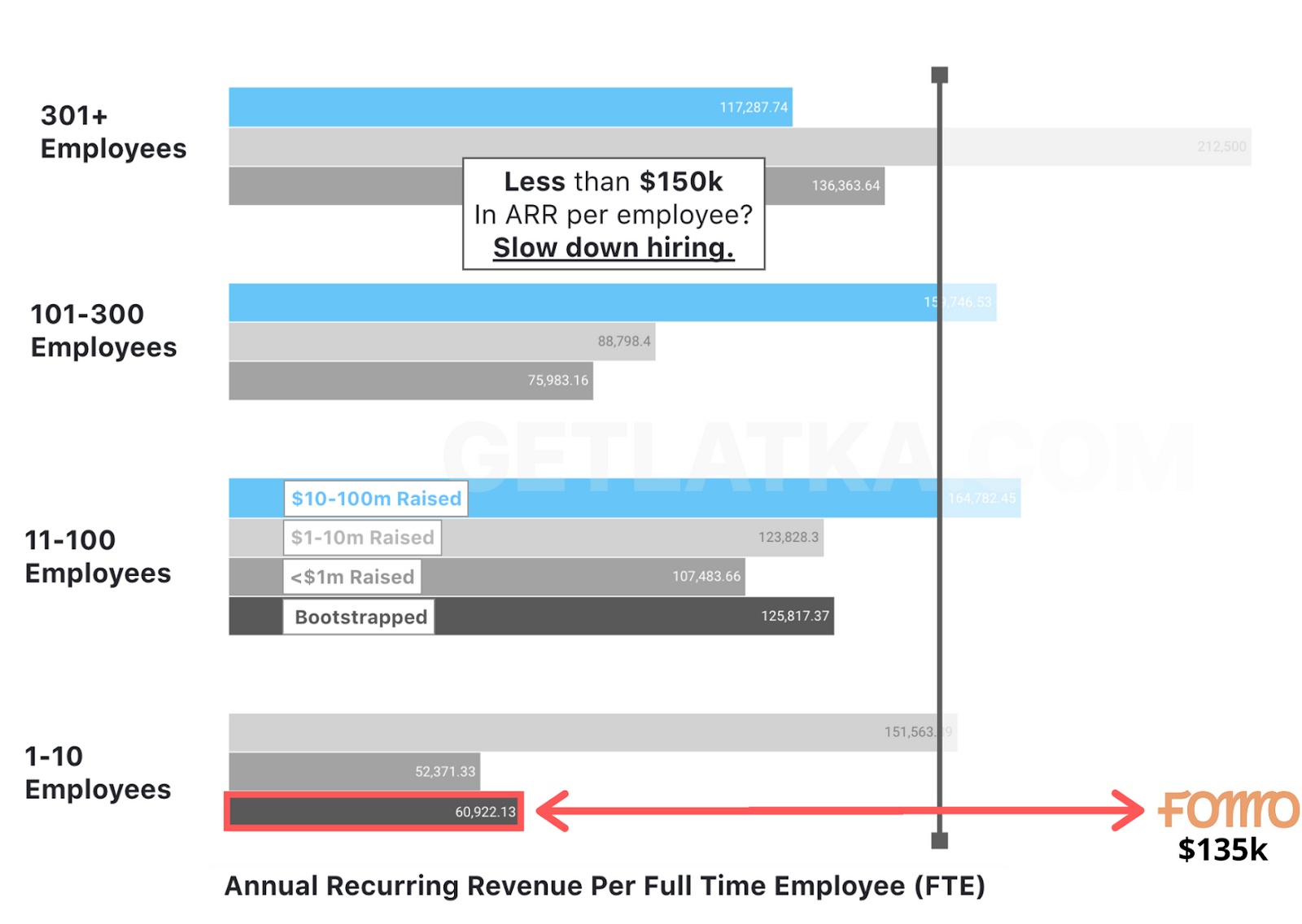 Kulp tossed up domain names since the company’s rebrand, but there was a problem. Another company owned Fomo.com.

“I set up Google Alerts for mentions,” he says.

“After about a year, I received an alert that Fomo (the previous company) had been acquired by a PE fund.”

For Fomo, this was bad news. It meant the PE fund now had more resources to build its brand and maintain its high search ranking. Kulp said the company decided the growing popularity of Fomo would continue to gain popularity in the future, backed up by Google trends: 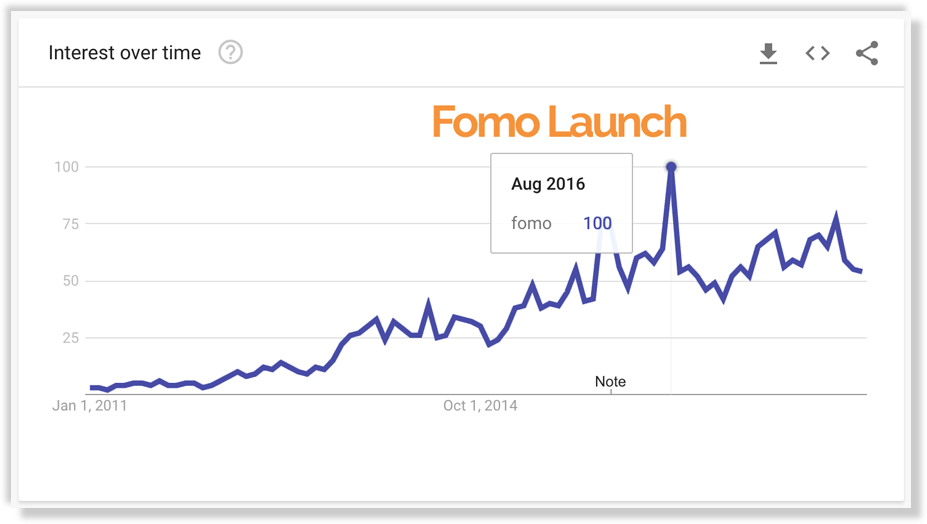 is there a greater 4 letter domain acquisition in the last year than fomo .com?

Kulp says the purchase was worth it and has described URLs in general as a basis of company’s legacy.

“It makes sense that all the good ones are taken, but that doesn’t mean they’re not transferable.”

Kulp and Mares have now built out their mini private equity firm under the company Fork Equity. Fomo is just one company in their portfolio of 12+ apps, including Cross Sell, Dealflow and Orange.

If you’re interested in selling or investing with Fork Equity, get in touch with the guys here. Kulp has also built a company, Micro Acquisitions, to reach others on how to build their own micro PE portfolio. The course teaches wannabe-acquirers how to source a business, negotiate a purchase and most importantly—grow it. You can check out the course at microacquisitions.com.