You probably make many assumptions around customer acquisition cost (CAC) and payback period if you’re in the B2B SaaS space.

Below are 3 common excuses I hear founders making as they scale:

In this article, we’ll explore each of these with real data points I’ve collected from 1 on 1 interviews with over 2000 B2B SaaS CEO’s on my podcast, The Top Entrepreneurs.

I can’t afford a 12 month payback because I’m bootstrapped!

When we compare payback periods relative to funding levels, we find that there is no direct correlation.

As you can see in Fig 1.1, companies with less than $10m raised have same sort of payback period distribution as companies with more than $50m raised (move right on the chart).

I chose to highlight Sailthru because they were recently acquired by Campaign Monitor in January (wasn’t a big win, but exit is an exit) even though payback period was on the higher side around 18 months.

Companies that can afford to wait longer to get paid back are usually really good at driving 50%+ of their new customers into upfront annual plans. This affects payback period length more than funding raised so start focusing on driving annual plans on day 1.

CAC is typically higher, not lower, on a relative basis on cheaper priced plans.

If you plan your marketing spend based off you average first year contract value, you’ve likely discussed the idea of “lets increase price point so we can spend more to get the customer!”.

When we look at different annual contract values, you’ll see this is not true. There is almost no correlation between higher ACV’s and higher CAC’s on a dollar basis.

In fact, based off Fig 1.2, you can see the opposite is true.

Companies with higher priced plans (left side), typically spend less to get customers. All companies with more than a $250k first year average ACV spend less than $250k or $1 for each new dollar of ARR.

The dotted line below is the 1 to 1 line. Companies above it have less than 12 mnth payback period, like MarketFactory. Companies below it have more than 12 month payback.

When I interview founders about this pattern, I’d credit most of it to the fact that these sales teams build their quota bearing rep proformas around a 7-10x multiple on the reps on target earnings (OTE) total compensation.

Ex: $200k total sales person comp when they hit quota, means quota target would be at least $1.4m in new ARR closed per year, or 7x.

With high priced plans, the majority of your CAC is going to be sales person base and commission and if you’ve optimized that for a 7-10x multiple, it’ll drive your CAC’s down to sub $1 for each new $1 in ARR.

My competitors have more revenue and just outspend me

If this was true, no startup would ever steal market share from larger competitors. Looking at the data below in Fig 1.3, you can see many sub $10m ARR (light grey dots) companies spend less to get new customers than their larger revenue competitors.

I’ve highlighted Sumo Logic data point which should be read:

Many of the light grey and dark grey (sub $50m in ARR) are growing at 100%+ growth rates spending $0.60-$1 to get a new dollar of ARR while their larger competitors are having to spend more to find new growth channels to make profitable.

This is to be expected, not not really surprising.

To find growth channels you can take advantage of with less cash and higher returns, consider new, un-proven channels like:

A useful question I recommend founders and marketers consider when looking to drive growth is: Imagine you had $100k – no financial limit – to influence one hyper targeted prospect who you know will pay you a lot of money if you can just get them signed up. What would you do to get that customer?

You’d buy billboards outside their home, you’d run FB, Linkedin retargeting ads only to their name, you’d figure out which airports they fly through and get airport advertising. Make a list of all these things that “may or may not scale” – these are almost always the best place to start.

With these ideas in mind, enjoy our updated rankings of 300 SaaS companies by CAC and Payback Periods to be released in August issue of Latka Magazine. 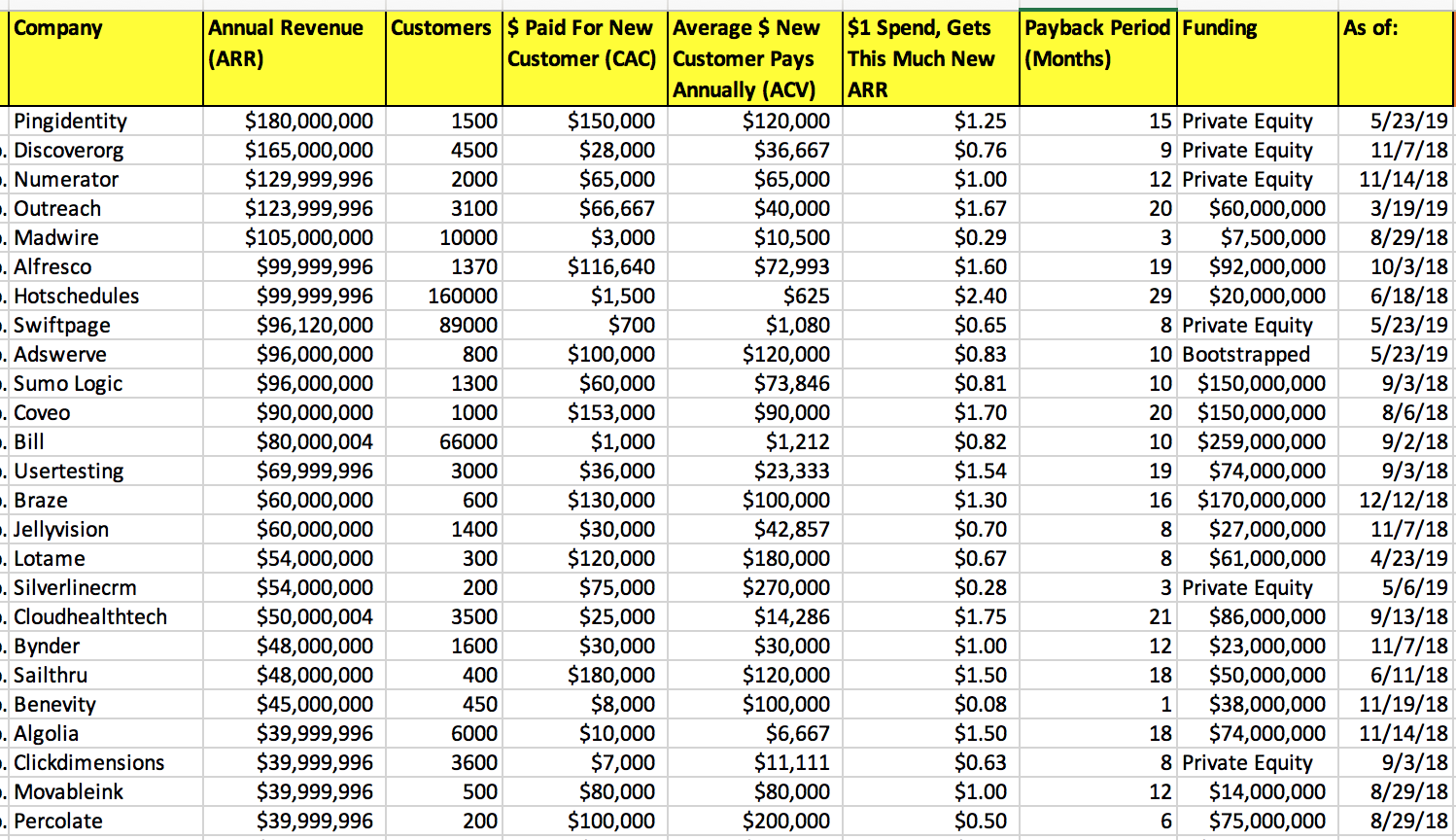 Why JivoChat Has Bootstrapped to $5M in ARR