When is the last time you clicked on an email marketing link?

It’s possible that if you got the right kind of pitch, it was pretty recently, but most people these days think “email marketing” and shudder.

Ragy Thomas, CEO of Sprinklr, knew how that would feel.

In 2009, he moved from email marketing to social media customer experience management, and just eight years later he was one of the largest names in enterprise marketing.

This blog post is based off of Nathan Latka’s podcast interview with Thomas, which you can listen to here. 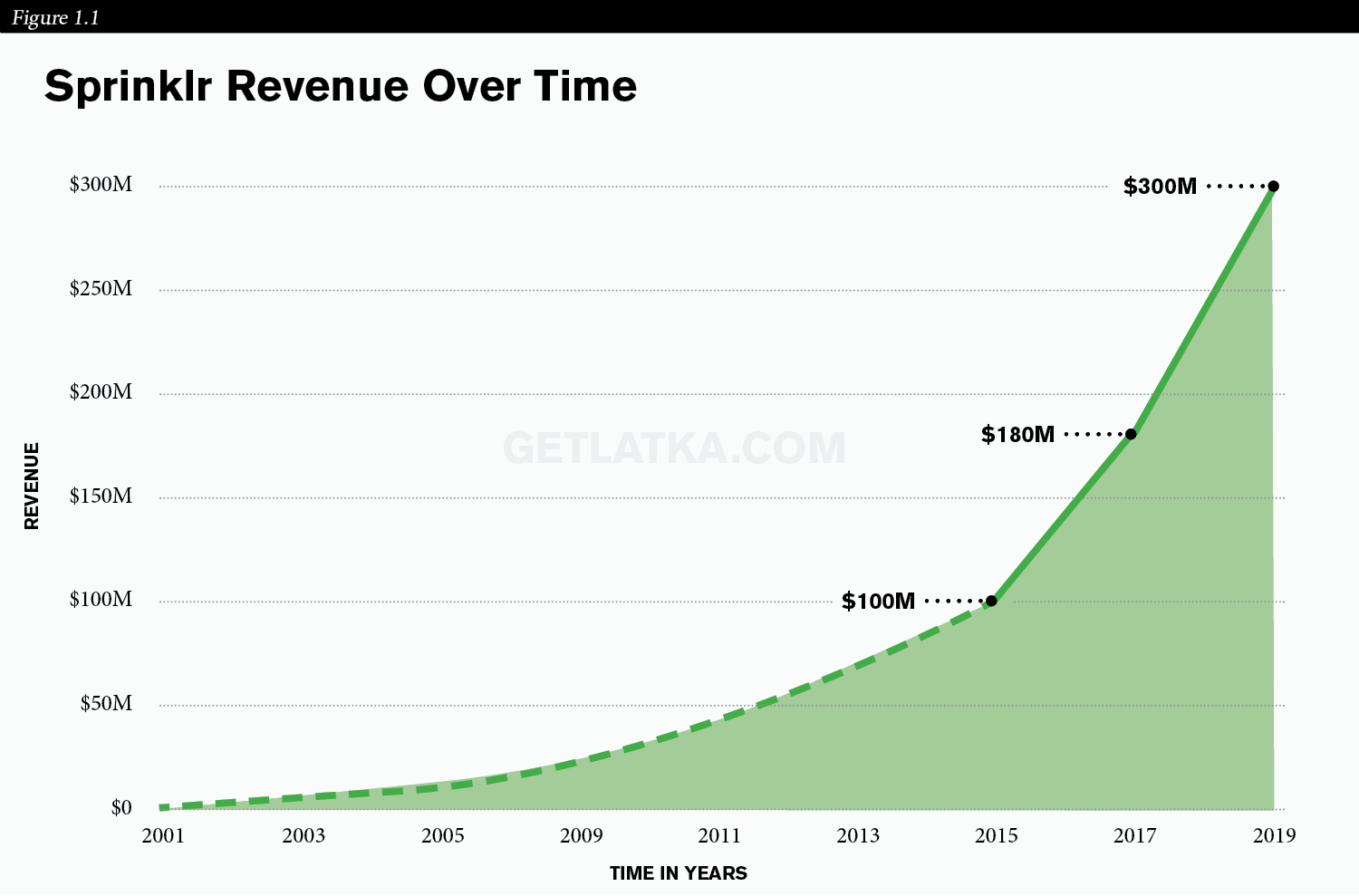 Seeing the Future of Marketing

In the 1990s, there were email marketing companies that were publicly traded. Few of them survived past the dot-com bust, and those that did were quickly folded into the marketing arms of other companies.

Thomas was working as an executive at Epsilon Interactive in 2009, which at that point was the world’s largest email marketing company, having absorbed the likes of Doubleclick et al.

Thomas is the kind of guy who never stops learning, and he looked at the digital advertising market at the time and saw… the past.

He saw social media marketing just beginning to rise up, an echo of what email marketing had done ten years or more before. “What I saw was the basic limitations of email communication being solved,” he said.

The difference with social media is that social media comes with permission. You follow people on YouTube or Twitter and you implicitly give them permission to send you regular updates. This is worlds apart from the unidirectional and boxed-in approach of email marketing.

“How do I build the platform for the enterprise to help them get all of these channels on board?” asked Thomas. It was only natural – the enterprise market was what he knew.

Fulfilling What the Market Needs

Today, Thomas says that Sprinklr is the “most complete social media platform for the enterprise.” It’s one platform across 24 social media channels, covering customer care, marketing, response, PR, and everything else a marketing team needs.

A potential client can sign up for different “clouds,” for example the social media cloud, the research cloud, the commerce cloud, and so on. All of these have products underneath them, such as social publishing, social automation, and social publishing.

Or you could buy the whole thing with an enterprise license.

How To Use Sprinklr and Who is Using?

The average Sprinklr customer has signed a $150,000 contract, some of them going up to eight figures but few if any under six.

Between 90 and 100 percent of customers are retained quarterly, but there has never been a huge focus on sales or sales pressure. For the first several years, instead, they focused mostly on customer success. 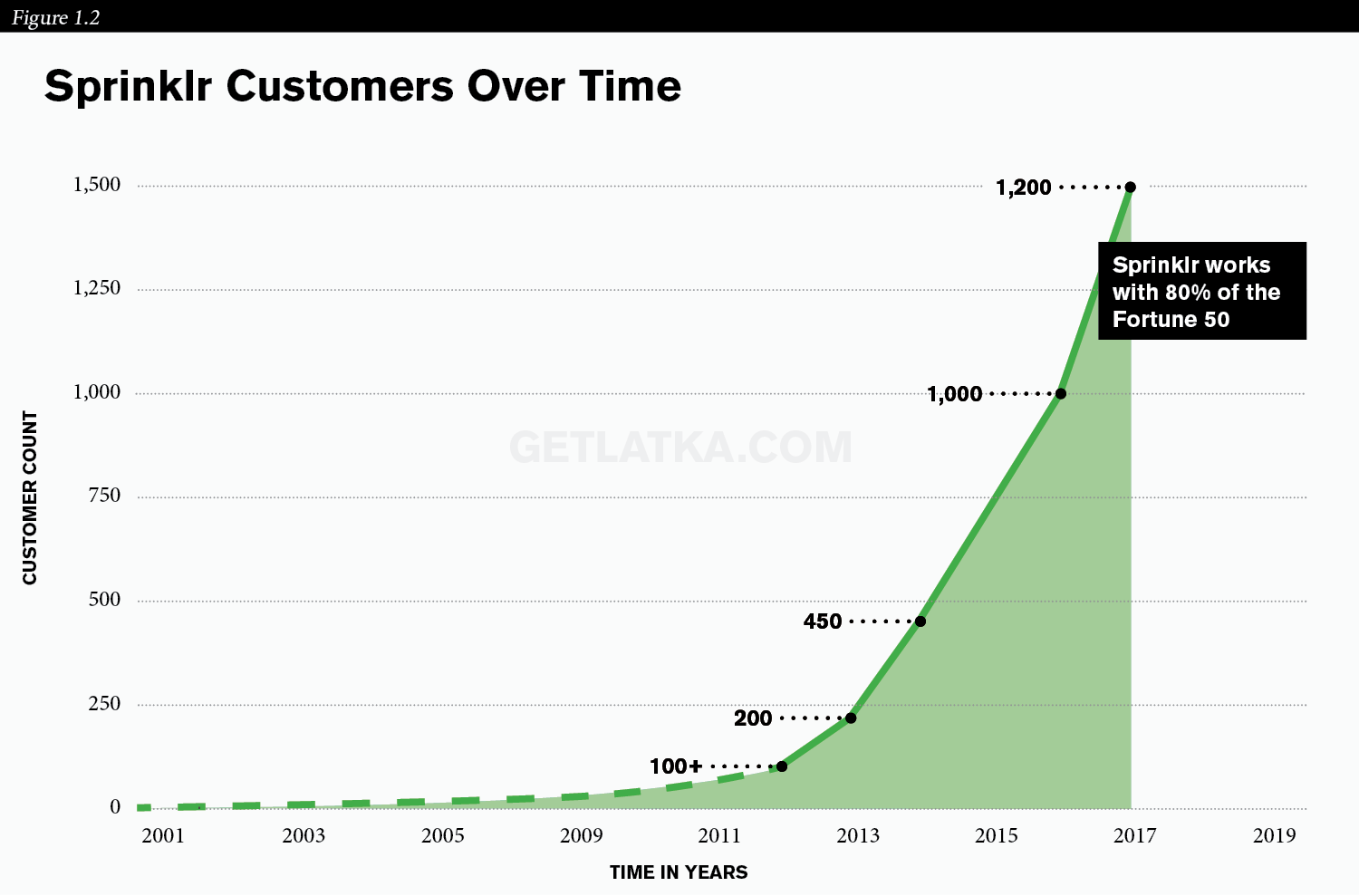 These customers have included Nike, Microsoft, McDonalds, and other major logos. He’s targeting the Fortune 1000 and Fortune 500 range, and he tells an interesting anecdote from his regular employee onboarding – which happens every month, seeing as the company is growing spectacularly fast.

Better Than Pitching to Clients

He asks the new recruits how many customers Sprinklr has. Some people know it’s in the 1200 range, and others have no idea. But he tells them it’s ten thousand.

Nine thousand of them just don’t know it yet.

In order to actually get there, he relies on a great deal of word-of-mouth and personal persuasion.

He’d prefer not to pitch to clients, instead demonstrating that he understands the playing field well enough to create so much value that he can’t be ignored.

If he can take the floor once or twice and explain to a client how they can use Sprinklr to take advantage of the wave of social media users to refocus their marketing strategy toward the future.

Why Ragy Thomas Bootstrapped Sprinklr and Who He’s Acquiring

For the first five years, Sprinklr received no funding from outside sources, and that was very much by design. Thomas wanted to maintain control of the company, but on a personal level, he felt much more comfortable risking his own money than that of investors.

But then the funding started, and it definitely didn’t stop. 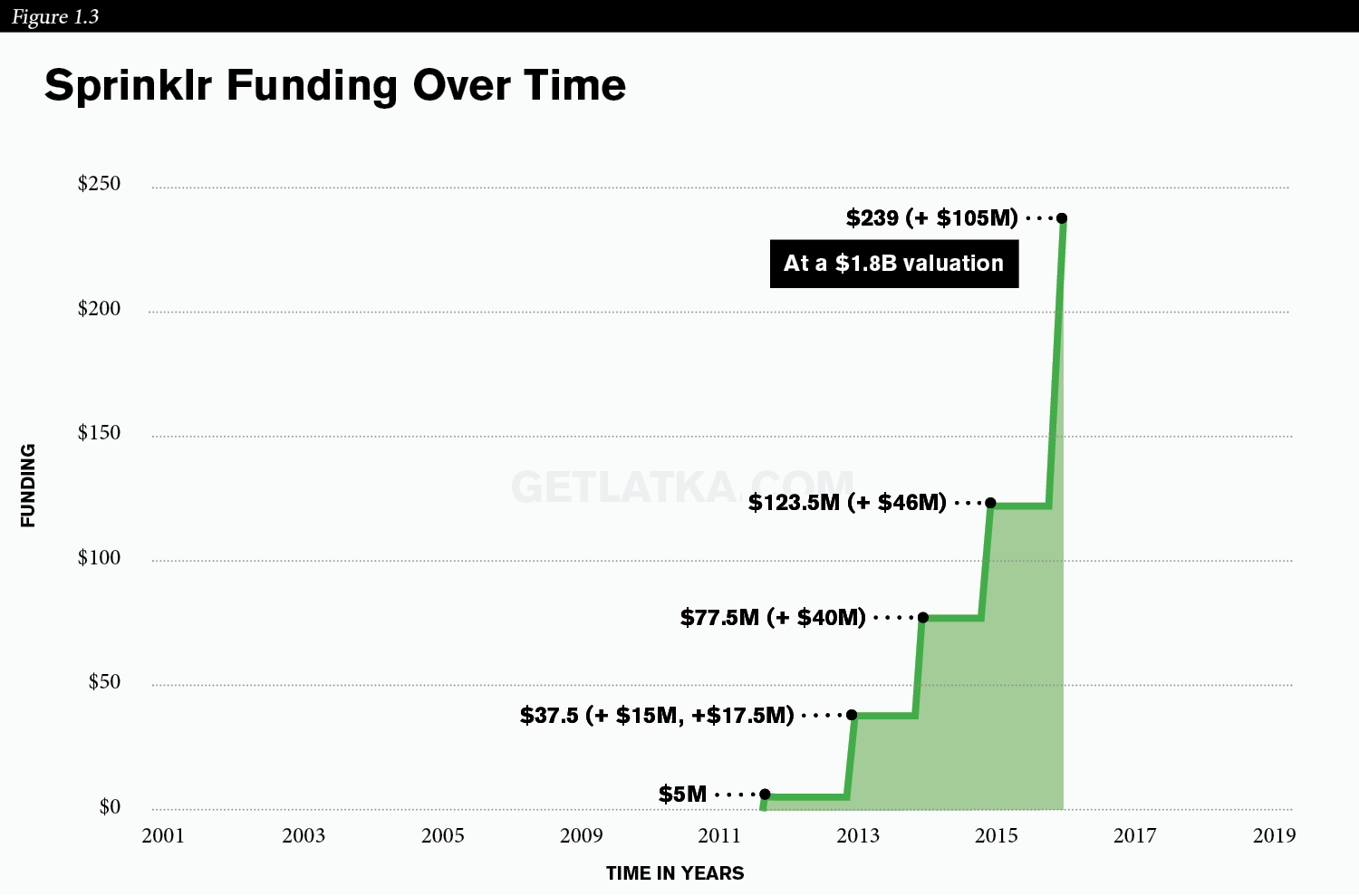 Acquisition has been very strong as well, though not in the way many people would expect. “Acquisition as a way to get revenue and growth is not something we’ve pursued,” said Thomas, instead explaining that many of Sprinklr’s acquisitions ended up with most of the code totally rewritten or thrown out.

What really gets acquired, then, is the people and the inside knowledge that comes from them. In 2016, for instance, Sprinklr acquired Little Bird, a company that maps connections across social platforms to identify up-and-coming influencers.

That was their eleventh acquisition, following others such as data visualization firm Postano, community management platform Pluck, and audience segmentation company Booshaka. Most of these acquisitions have taken place after 2014, when things started to take off big-time for Sprinklr.

Around 2012, large VC firms were “jumping ship” from social media marketing platforms. But Thomas stayed strong at the helm of Sprinklr for a few reasons.

Second, he was tenacious.

He believed in his product and knew that social media wasn’t going away. It might have been changing too fast for some people, but not for him.

It takes bravery to hold on to an idea that others say is dying. Some of the CEOs that most inspire Thomas are Bill Gates and Steve Jobs, specifically for their abilities to look far ahead at industries that were just beginning to emerge, not the short-term here and now cycles common in the startup space.

About the CEO Ragy Thomas

An engineer, investor, and entrepreneur hailing from India, Ragy Thomas is the founder and CEO of Sprinklr, a leading social media customer experience platform. Sprinklr is headquartered in New York, USA.

Favorite CEO: People who are tenacious and willing to go all in against the future. Bill Gates and Steve Jobs

Raised too much? Here’s Real Story of Wistia Debt Deal That Drove $40m Revenues, $6m Profits in 2019 (2 Years After Buying Out Investors)

Just $10m raised to hit $30m in ARR, how the king of capital efficiency did it