The Startup Building Its Way in Public to $50K Organic MRR

I had the serendipitous opportunity to speak with Paul Yacoubian in early January 2021 right as Copy.ai was crushing it on Twitter. We had another brief interview a month later, just as I was about to draft this post. Sometimes being timely is just being lucky!

Update: As of this writing, cofounder Paul Yacoubian has posted that Copy.ai has passed $50K MRR in February 2021.

It’s early January 2021, I just finished a call with Copy.ai cofounder Paul Yacoubian, and my interest is piqued.

His new startup, Copy.ai—launched with cofounder Chris Lu—, is on track to increase the previous month’s MRR stat by at least 50%. As January came to a close, they would end up achieving this goal, reaching $40K MRR—in just about three and a half months.

So how did Yacoubian and Lu build their way in public to a benchmark of $40K MRR and how did doubling-down on that strategy supercharge their organic growth in just a few months? 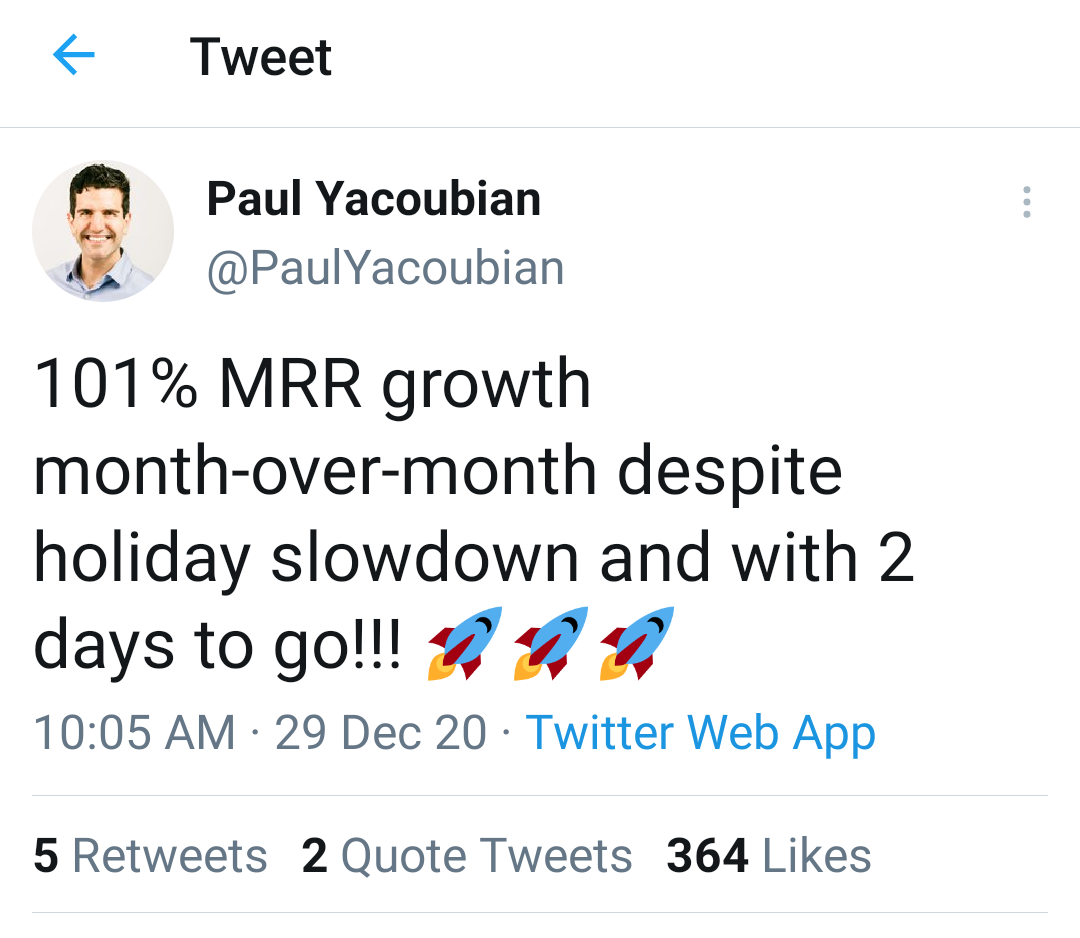 Created by angels and VC partners Paul Yacoubian and Chris Lu, Copy.ai is actually the second idea kicked out the door by the team to be built in public on top of OpenAI’s Generative Pre-trained Transformer 3 (GPT-3) artificial intelligence model.

Their first—Taglines.ai—was built in under a week and saw 500 immediate signups just from a soft launch on Twitter. About twenty or so of those converted to paying accounts while Yacoubian and Lu experimented with their pricing structure, increasing it first from $3/month to $5/month, and then again to $10/month. And though GPT-3 was working well for taglines, Yacoubian and Lu realized that their customer base was hungry for more than just taglines—they were looking for something more flexible in creating longer-form content. Yacoubian and Lu thus pushed forward to explore the idea of building a whole platform of copy-related tools for marketing use-cases.

So they did the simplest thing; they took the Taglines’ back and frontends—built on Firebase and Webflow, respectively—, cloned them, and in October 2020, launched the result on Twitter as Copy.ai.

They saw 2K users in the first couple of days. Just under 2 weeks later, those numbers were increasing by about 300 signups/day.

Funnily enough, even though the Copy.ai domain was already taken, Lu discovered it was for sale for $5K—or leasable for $170/month. In Yacoubian’s own words on the Commerce Hero podcast: “I was like, whipping my credit card out because this is an amazing domain name. So of all the things we’ve done, so far, that decision has been the biggest competitive advantage we’ve had—[literally] just the name of the site.”

Now with a variety of tools that help generate copy ideas for blog content, ad content, hero text, landing page content, etc., Yacoubian and Lu want to explore which types of tools their founder and marketing clientele will desire next.

Tools to aid in copy for social media content, Facebook/LinkedIn/Google ads, sales copy, blog content, eCommerce copy—the list can, and I’m sure does, go on. Is the idea of using AI to generate content 100% virgin territory? No, but there’s just something about the ease of Copy.ai that seems to ease the whole process.

Some of their new additions are already things like a startup name generator for the founder community.

But let’s hop back over and rip apart some numbers.

Finishing the Year’s End on a Hockeystick

Perhaps it’s this easing that has led to insane (arguably hockeystick) growth since Copy.ai’s launch in October of 2020—as I previously noted, their MRR has increased a minimum of 50%/month since launch.

From the launch date in mid-October, they increased their MRR 220% by the end of November (about 6 full weeks), from just around $3.7K to $12.2K. From most any viewpoint, those numbers indicate decent growth, especially for a first month and a half.

While that MRR percentage continues to decrease by about half every month, it’s worth noting that at their current rate, it’s like that they could hit $50K in MRR just about six months after launch, which tells me that there’s pretty significant growth potential down the road. With low expenses and a growing MRR, Copy.ai can afford to bootstrap their way forward as they continue to tinker with their tools and see what their customers require and respond to most—a customer base that’s grown to just shy of 20K signups just during the winter months.

According to the available data—as of yet, the “building in public” stats on Paul Yacoubian’s Twitter, ha!—October 2020 saw Copy.ai’s userbase shoot to around 8.1K users in the first couple weeks of the tool’s launch. By the end of November, that user-number was up to 19.9K.

In December 2020, Yacoubian started publicly reporting user-numbers in terms of discernable signups, for which the total was around 15K for the month. While this arguably signaled ~25% decrease from November’s haul, my recent discussion with Yacoubian indicated that was as a result of measuring October’s and November’s numbers in terms of total users while subsequently measuring December and January through the lens of actual signups. I also suspect that during this time, Yacoubian and Lu were probably experimenting with their pricing structure to find the right price point at which they could provide the best service to their customers for the best cost on their end.

In Yacoubian’s own words: “[As we] started to see these organic mentions online…we set our initial pricing and started getting the conversion rates that would make us venture-backable [and] a real business.”

Looking at their pricing page, I’m curious about the number of “runs” per price plan, and make a mental note to return to that momentarily. Before, though, the rest of the user/signup numbers.

That aforementioned December number, however, increased again by the end of January 2021, back up to around 19K signups—another increase of around 16% m/m—, so clearly whatever they did to adjust their initial pricing worked.

Copy.ai also seems to be taking an overall kit-oriented approach to their SaaS offering, building out an ever-expanding set of tools that their users can choose from, depending on their needs.

At launch, their toolkit comprised about 12 or so tools, which grew 5% to 17 tools by the end of November.

By the end of December, though, that 5% was up to 20%, with 20 new tools joining the repertoire for a total of 37. That number then increased again by 15% as they ended January with a total of 52 tools in their belt.

It’s this growing focus on tool expansion that I think gives Copy.ai a unique value proposition. Even Grammarly—wildly successful now—really keeps its value proposition to a narrow lane of offering. And that works for them. But in taking a bit of a broader approach, Copy.ai can arguably appeal to a wider array of end-users, especially those who may be in a bootstrapping position themselves for their companies. And as more and more of these people bootstrap in public, they become an ideal demographic for Copy.ai to target.

This seems more or less right in line with Lu’s thinking and assessment of their target userbase and go-to-market strategy, as he remarked on in a Forbes interview:

“Our customers are mostly small businesses and entrepreneurs. The founder/owner is usually both the end-user and decision-maker. Our go-to-market strategy has revolved around generating inbound interest by [‘Building in Public’] on Twitter.”

So that’s MRR, signups, and even the number of tools offered by Copy.ai—but what of those “runs” that the pricing page references?

According to Yacoubian, it’s exactly what it sounds like: the number of returns that can come from a request. And this number can grow to thousands per day, providing the user with ample choices of content for their ads or site copy.

It’s a great idea to track the number of “runs” in the system. And in fact, Yacoubian and Lu take it to the next logical step: tracking copy results generated and results saved.

Those numbers are pretty respectable for a new tool only a few months beyond launch. In the latter two weeks alone of October 2020, Copy.ai saw 1.15M copy results generated.

The growth of the number of saved results is also noteworthy:

While it seems that the percentage of the results saved to those generated hovers somewhere between 1.3% – 1.6%, that number could quite feasibly increase with the addition of new tools and new use-case scenarios. Copy is one of those things that’s so powerful because it’s so malleable, so if Copy.ai customers start using it more directly for a particular need, it could help them find even greater product-market fit while simultaneously increasing their saved/generated statistic.

In the most obvious way, this immediately reminds me of how Snapchat tracks the number of snaps sent. It’s an easy enough thing to track and the numbers look good on paper.

But it serves another purpose, I suspect—it allows Copy.ai to learn and better understand the types of content for which most people are using the toolset.

Is it mostly used for site copy or for ads? Possibly mostly used by novice writers or “non-writers” who just want some decent copy on their sites?

Or is it seeing greater adoption by users who are professional writers and branders to better serve their own customers?

With answers to any or all of these questions come possibilities for Copy.ai to tweak its (ever-expanding) toolkit.

Building in Public to the Top Spot (And Beyond)

It seems—at least from this vantage point currently—that Copy.ai’s decision to build in public has paid off. In a big way. 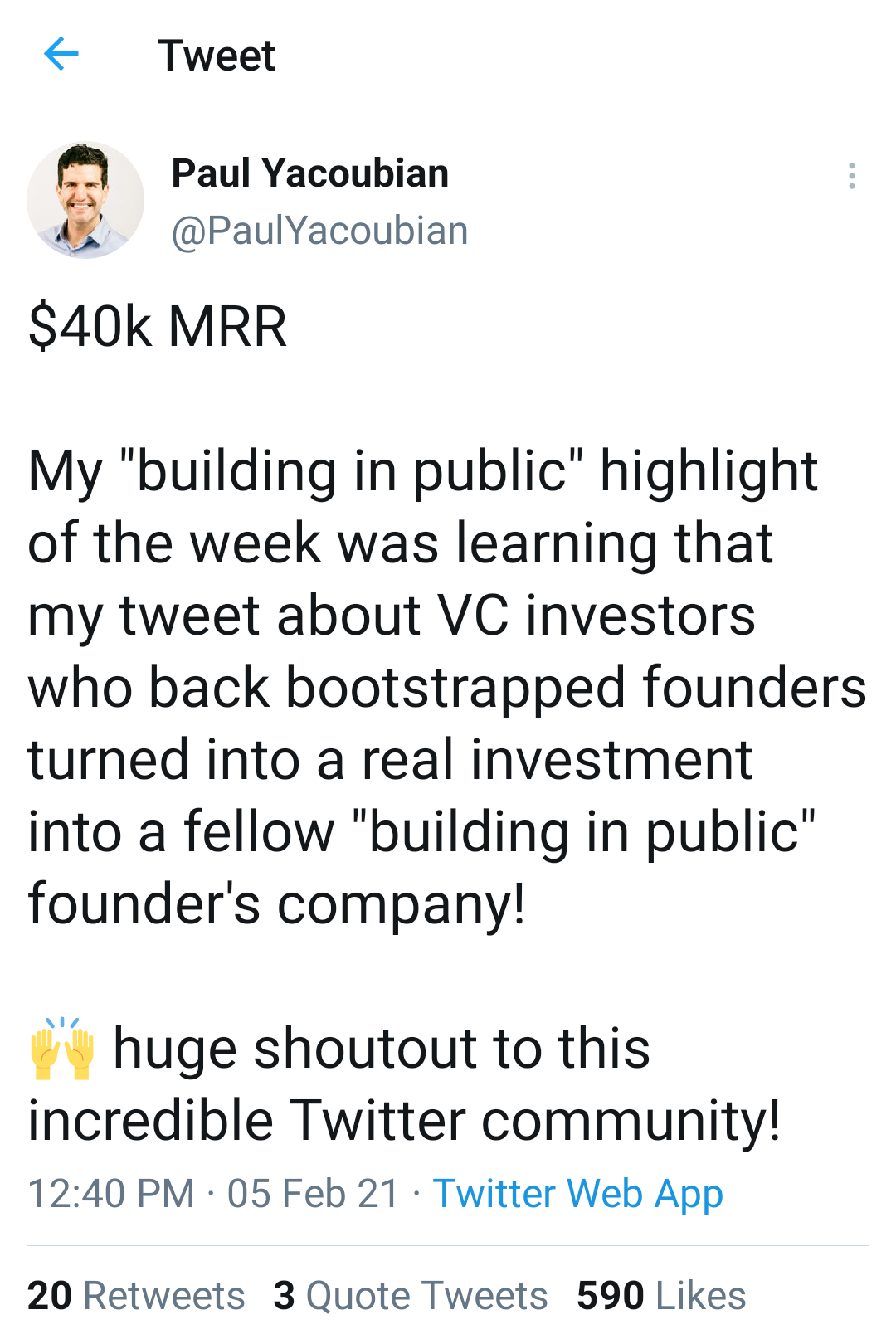 They organically grew their MRR to $40K in under 4 months, which—if that’s something they can maintain even as a baseline—would put them at just under a half a million ARR for 2021. Not bad for a company that was spun off a previous week’s build and launched in the last quarter of the year.

If nothing else, Copy.ai’s quick traction might very well incentivize more companies to try the “build in public” approach and see what happens. As a nice little aside, Copy.ai was posted to Product Hunt just recently in February— months after their initial launch—and claimed the coveted daily top spot with well over a thousand upvotes. Clearly their product and strategy struck a chord with their target market of bootstrapping builders who might be looking for copy. Whether or not this trend continues is anyone’s guess, but for the moment, Copy.ai is a pretty hard-to-ignore example of the benefits of the “build in public” mentality.

Certainly organic growth to $40K MRR is a good way to start the journey.

With $1.3 Million in ARR in 2020, RevOps SaaS FullCast Plans to Raise $2 Million on a Note Before Series A Round

How LBA Ware Bootstrapped to $2M in ARR