Malwarebytes $126m in Revenues, 60k Customers, About to Announce Massive NEA Led Round of Financing?

In an interview from February of 2018, Malwarebytes CEO Marcin Kleczynski, barely 28 years old at the time, sat down to chat with Nathan Latka and shared some remarkable things about his business journey.

Today, Malwarebytes has an incredibly strong following online. Most people probably don’t know, though, that it was started as a personal project because Kleczynski’s own computer kept getting viruses.

That was in 2003, and with a lot of research and a lot of problem-solving, then-teenage Kleczynski had the idea to build his own program into a company for the masses. Just having started college at the time, development took several years.

But as soon as it was launched, in 2008, it was successful. It made a million dollars in its first year, completely bootstrapped. 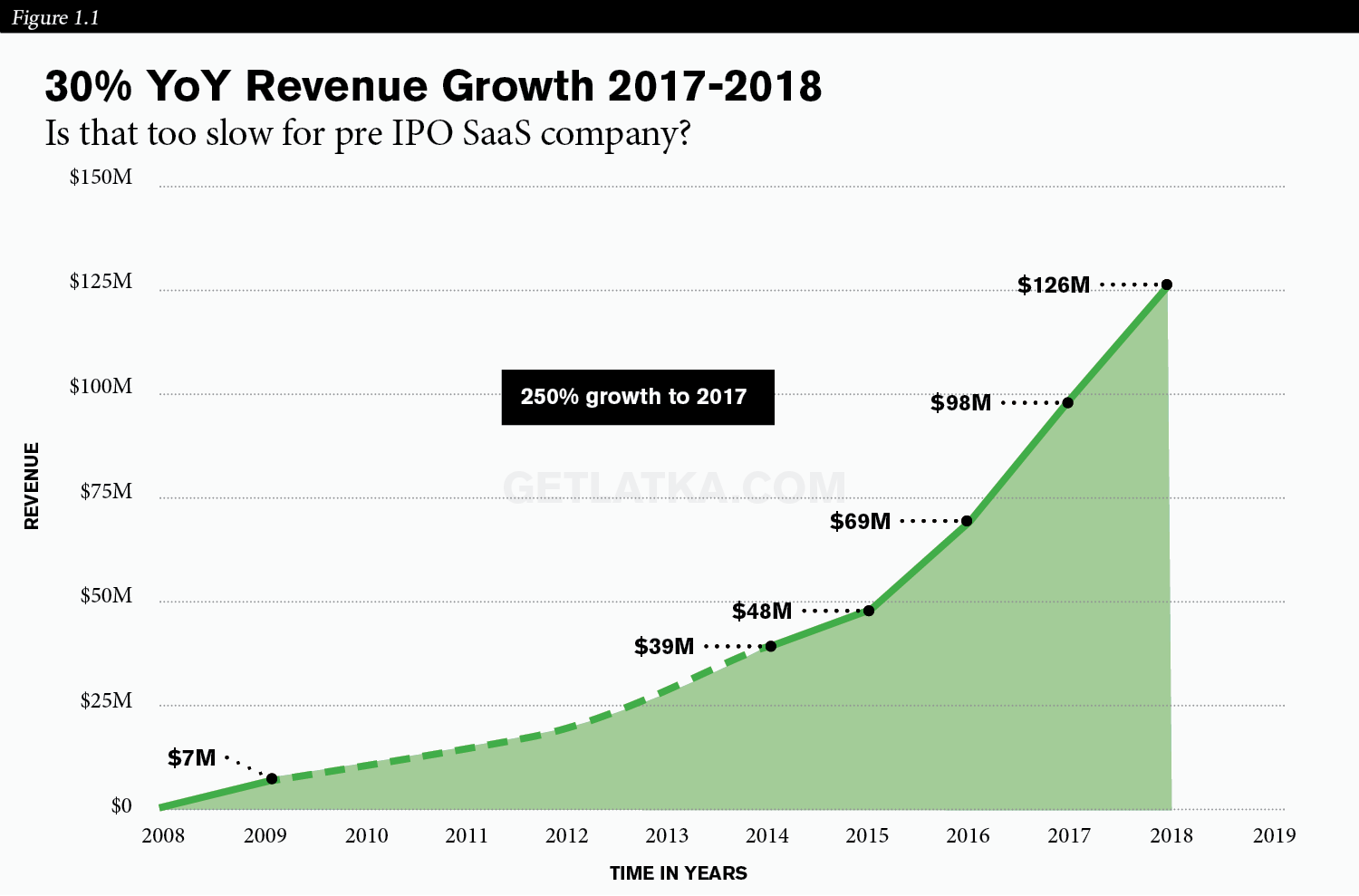 This article is based off of Nathan Latka’s podcast interview with Kleczynski, which you can listen to here.

What is Malwarebytes? Building an Anti-Virus Team

In the early 2000s, with social media less prevalent and with online communities still more of a niche thing, the best place to recruit programmers was online. Kleczynski was based in Chicago, but he was scouring tech support and antivirus forums worldwide looking for the people that were the most creative and the most helpful.

Then he made them a simple offer: he’d pay them to keep writing the same kind of code they’d been posting online for free.

But it wasn’t quite as easy as it sounds. With a tiny team (a coworker was also involved) and an enormous, incredibly shady hacker community around the world always looking for new exploits, Malwarebytes had to get good.

“We were constantly refining our methods,” said Kleczynski. They went through several iterations of team members and strategy before launch because they wanted a product that would do well by itself, one that would spread through word of mouth.

Later, Kleczynski would read business books about how to do essentially exactly what had worked for him already – capture the market during development of the product in order to get customers from day one.

Since he was recruiting online, many of his dev team members have been remote since the beginning. In 2018 the team was 690 people strong. 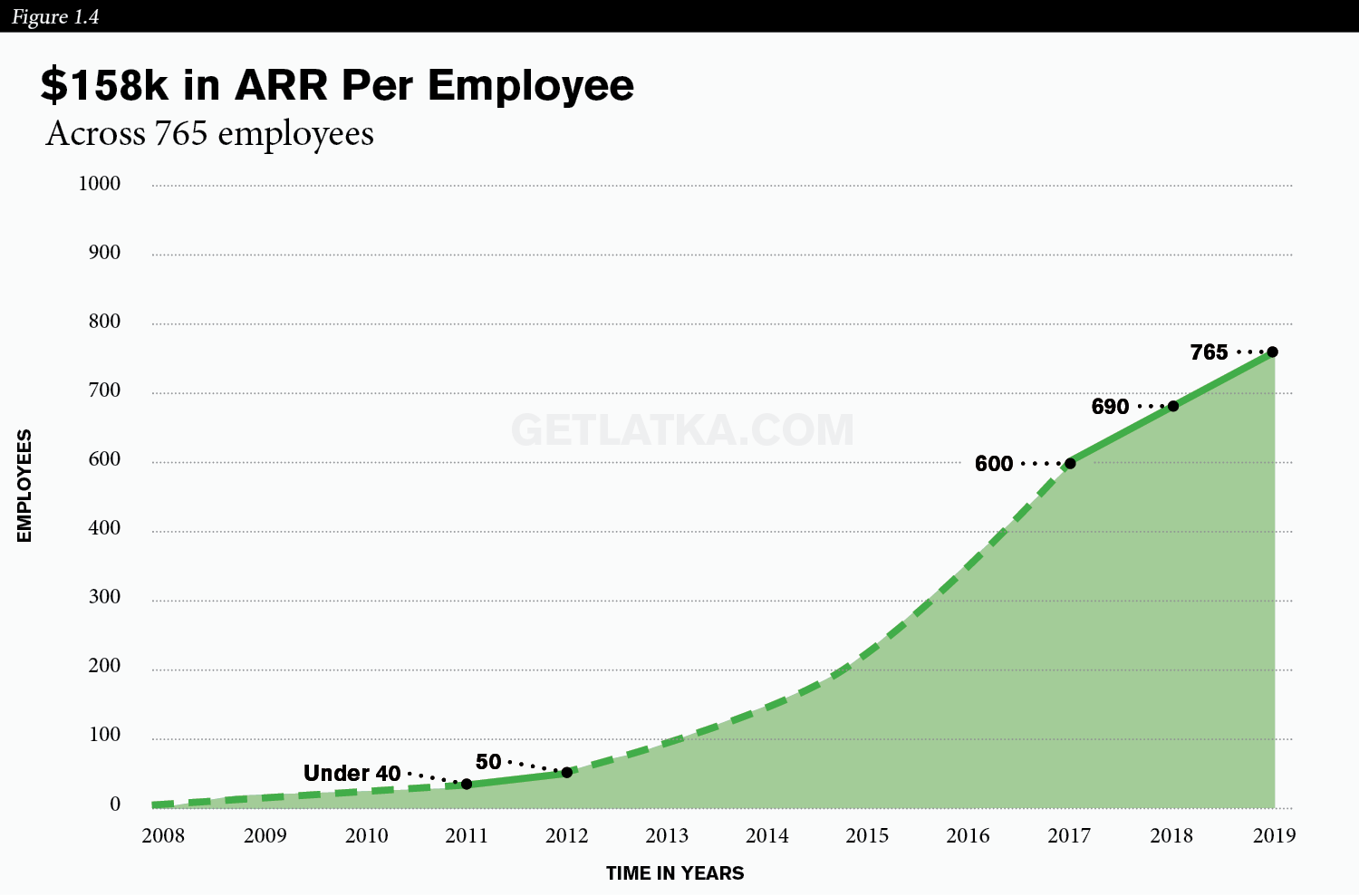 Back to the name – malware bites. It’s a real pain to have a virus on your computer, especially these days with sophisticated ransomware attacks that can lock up everything you’ve been working on for years.

So from the start, Malwarebytes cleans your infected computer for free. Even to this day, you can use Malwarebytes all day long without paying a thing.

Originally, you could pay twenty-five dollars and get lifetime access to the product. However, software development needs a more constant stream of income than that – so the price was bumped up to a $25 per year subscription model.

Then, as development costs rose, $40/year. But here’s the thing – anybody on an old plan is grandfathered in, forever. They’re not out to screw the customer.

And even with this grandfathering, they’re profitable on every single consumer account – 50% of their roughly three million users (60k paid). They also do heavy discounts, such as $12-for-a-year Black Friday doorbusters. 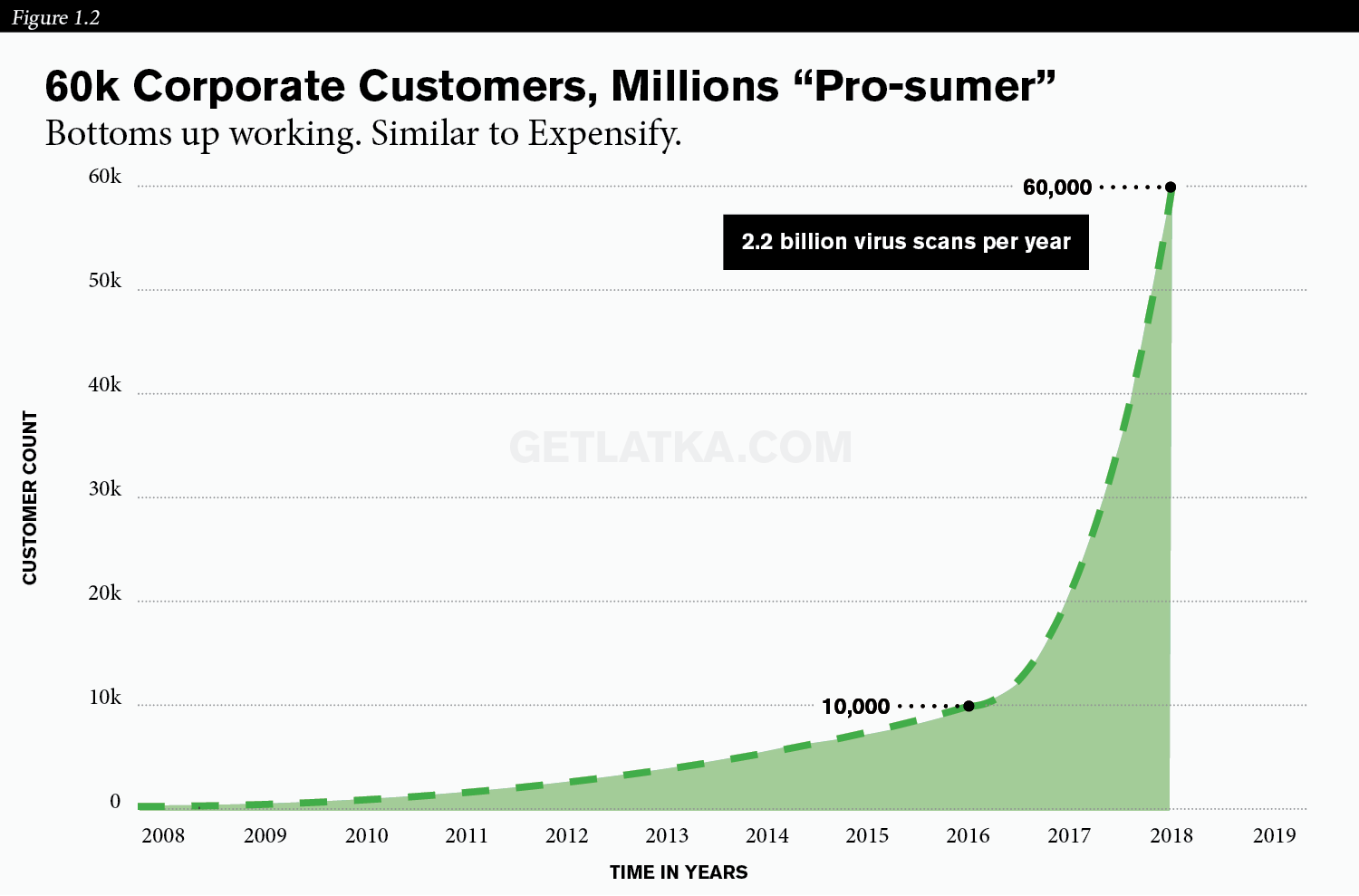 This, as well as their stellar performance, has earned them excellent trust among their users. A lot of their enterprise deals come from a simple cycle:

A consumer has a problem with their computer and they bring it into the shop. PC, Mac, doesn’t matter. The tech there is likely to recommend Malwarebytes, even just the free version. So maybe a sale is made, maybe not, but the price point makes it pretty attractive to people who have been tricked by malware just once.

Sound like a sales department fantasy? Not at all. Roughly half of all enterprise contracts come from this exact model – and they’re sometimes paying upwards of $3000 per year on a two- or three-year contract.

Since B2B (business to business) sales often generate much higher renewal rates, that’s where the main focus was in 2018. More investment in sales and marketing for sure all while balancing customer acquisition cost (CAC).

That’s on top of the roughly $300,000 monthly going to Google AdWords, plus more holding cybersecurity events and giving webinars.

That web advertising, by the way, is handled nowadays with an outside agency. Kleczynski’s advice was to rotate your advertising teams and ad agencies every year or so in order to get fresh new ideas.

And how about outside investment?

Since the company has been profitable since day one (a fact Kleczynski attributed to his Chicago attitude of “build businesses that make money”), it wasn’t impossible to raise capital.

$30 million in Series A funding came in 2013 from Highland Capital Partners, and then in early 2016 another $50 million came from Fidelity. With that kind of investment, he was able to give employees an option pool starting in 2013. 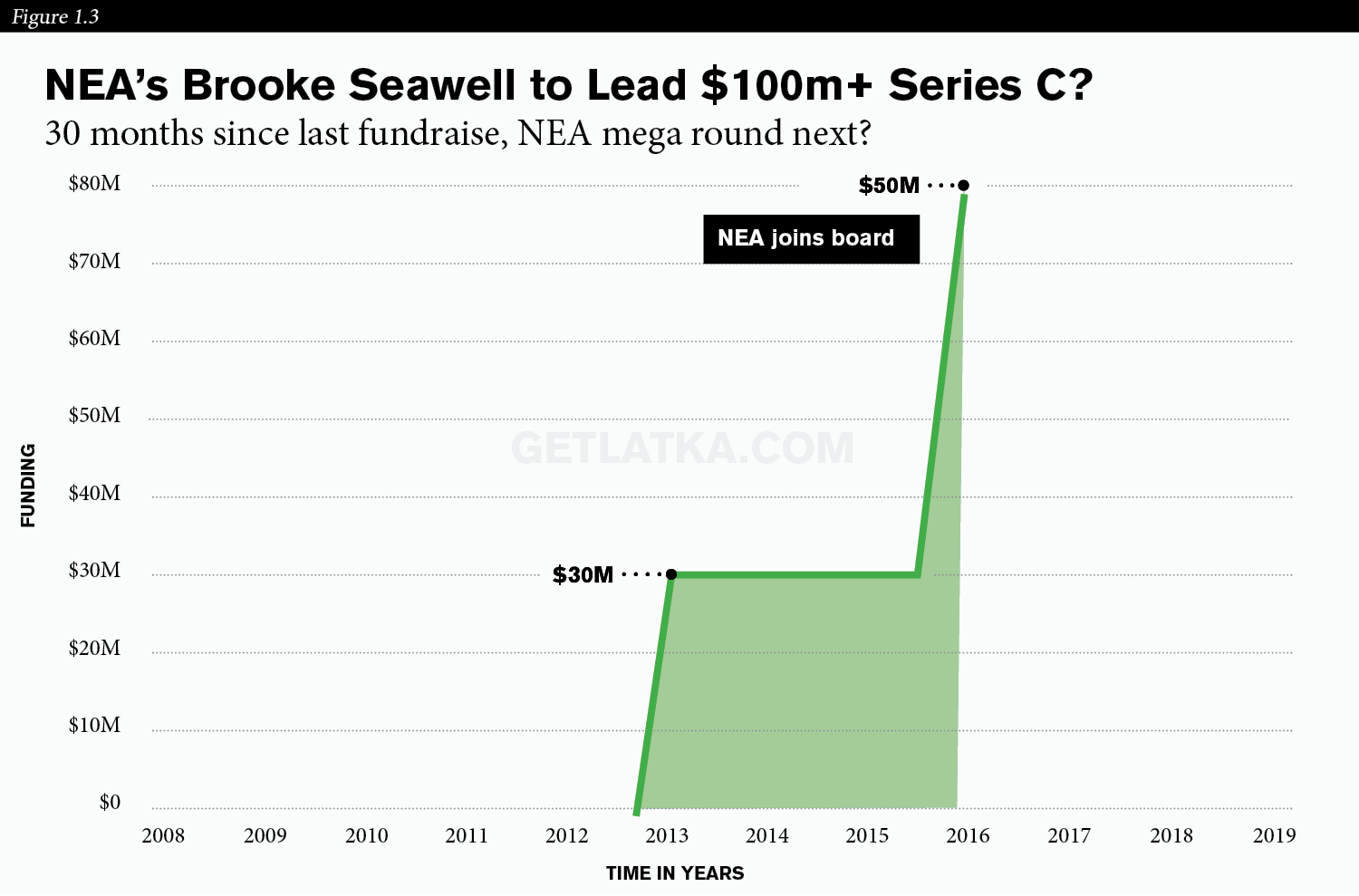 In addition to the ability to share wealth with the team that makes it possible, outside capital investments also lend credibility to the company in a way like free mega-advertising.

One other thing that, unfortunately, lends credibility to the company is real-world ransomware like the infamous WannaCry from 2017. People see those in the news and immediately start reading up on cybersecurity, especially if someone they know was attacked.

That makes things unpredictable, especially in the relatively more volatile enterprise market with around 50,000 customer accounts as opposed to three million “pro-sumers”.

But what Malwarebytes wants to instill in its team members is optimism, not pessimism. One piece of advice that Kleczynski would give his younger self is “Marry the believers, divorce the naysayers.”

People who only focus on what can’t be done bring a company and a person down. Realism is important, but as long as there are good people working to keep your computer secure, you can look brightly into the future.

Marcin Kleczynski was born in Poland and moved to Illinois at a very young age. As a child, he tinkered with computers and learned to identify and remove malware before his fifteenth birthday. His company, Malwarebytes, enjoys a stellar reputation among sysadmins and consumers alike.

Sleep amount: Eight hours – “It’s the most important thing of the day.”

Advice to 20-year-old self: “Marry the believers, divorce the naysayers.”

Sub title: Is that too slow for pre IPO SaaS company?

Sub title: 30 months since last fundraise, NEA mega round next?

How ReviewPro Has Hit $15M in ARR By Helping Hotels

MedStack, the Heroku for Healthcare, at $30k in MRR

Should You Fire Engineers or Sales People First During COVID?

Annual Contract Value (ACV): What Does It Mean?