Founded in 2011, Zapier is an American web-based service that allows end-users to integrate the web applications they use and automate workflows.

Last time we spoke to Zapier in 2017, the company had 60k paying customers. Now, the company has 100k+ customers (and a total of 3m users) that use Zapier to integrate their web applications. They’ve also managed to boost their customer’s Lifetime Value (LTV) from $400 to $883 in the same timeframe.

So, how has the SaaS company managed to nearly 4x its revenue to $50m in less than two years?

Nathan talked with Zapier’s CEO, Wade Foster, to find out.

How does Zapier make money?

First things first, Zapier offers freemium and paid subscriptions, which might explain that while its paying customer base is 100k+, its actual number of users tips the scale at 3 million.

It works by automating tasks between web-applications that would otherwise have to be done manually through trigger-based “zaps”.

Their customer base is built from a bottom-up, product-driven approach. Foster says the company lures its customers in with their freemium strategy. And then, it’s up to the customer to upgrade based on their workflow needs.

Here’s the genius behind their pricing model. Their freemium offering is a carefully crafted taste-test:

It offers customers limited “two-step” zaps so they get a feel for how powerful the tool can be in their workflows. Then, they can use the tool on a freemium basis forever if it meets their need. Or if they want more, they can upgrade.

With its average contract value now sitting at the $500 mark, Zapier is now sitting in a sweet spot with other 100k customer companies like GetResponse and Issuu. 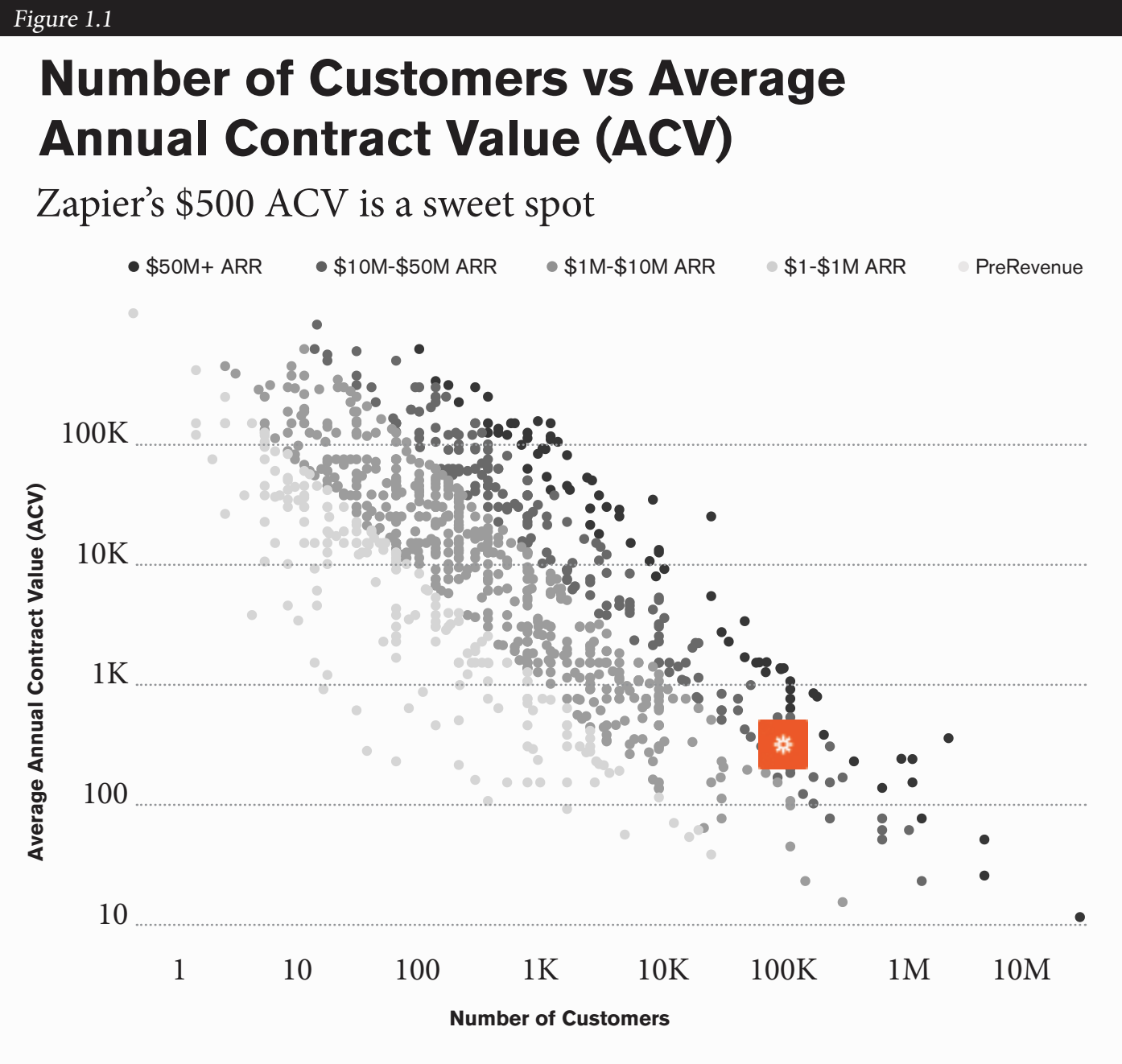 But how have they doubled their LTV in 18 months?

Well, they’ve nearly doubled the amount of apps integrations in that time. When we spoke to Foster this time around, Zapier offered its customers 1400 integrations. By doing so, they’ve increased the number of businesses that look to them as a solution to automate their processes.

Foster says he has an almost VC-like approach to scoping out new integration opportunities to offer up their customers. Zapier keeps a close eye on up-and-coming apps and looks out for specific signals like hiring volume and overall traffic. Foster says Zapier can then decide if it’s time for them to approach certain apps and have a conversation with them about integrating.

Zapier changed up its pricing model to retain its larger customers

Despite competitors like Snaplogic and Mulesoft targeting Enterprise companies, Zapier has managed to hold onto its larger customers—even when they scale.

Part of this may be down to the company’s decision to offer “team and company” subscriptions in mid-2017. The pricing model is capped for teams at $250 (and $600 for enterprise accounts), which is more transparent and accessible than competitor Mulesoft’s “custom pricing” model.

When Zapier added the extra subscription model, Foster told TechCrunch at the time that it was a no-brainer for the company to help larger teams collaborate under a single-price point.

“As we’ve grown—and we’ve always focused on B2B—we saw that businesses using these tools want to collaborate. It was kind of a no-brainer to go in this direction,” he said at the time.

Zapier’s monthly churn rate is still <5%—the same it was 18 months ago.

Foster says part of the reason behind the churn rate it Zapier’s ease of use; it scales well alongside the companies that use it.

“It has a lot of sophisticated features that help folks scale their usage, so we see folks go pretty far with us and very rarely… I can’t even think of a time when somebody has said I’m stopping using Zapier; I’m going to go and start using something like Mulesoft.”

But having the ability to impact every part of a business isn’t always a good thing, Foster says. Because Zapier helps marketing, sales and customer support, it’s hard for their customers to know exactly how Zapier will help them most.

The company has addressed this by building and sending a sophisticated email campaign to their customers. It looks at how a customer is using Zapier, and makes recommendations about how they could be using it in a better way.

“If we’re able to help you solve more problems over time, you’re happy to keep using us.”

With $50m Revenue and $1m capital raised, Zapier has focused on new partnerships to supercharge growth

Let’s look at the funding numbers behind some of the players who’ve tried to crack the web-application automation space.

IFTTT has raised over $60 million in venture funding for its product, nearly 50x more than Zapier’s funding.  And Microsoft’s answer to Zapier, Microsoft Flow sits at a mere 222 integrations, 1/7th of Zapier’s offering.

So it seems Zapier has created a monopoly around its services. 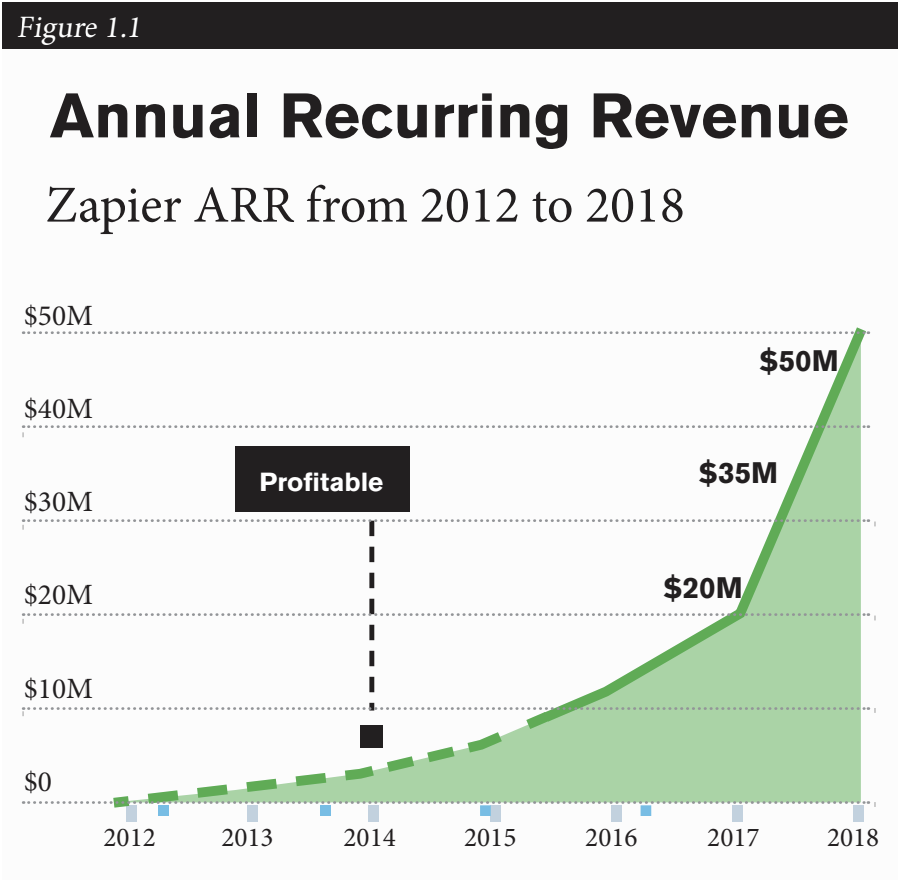 And with its revenue growing from $14.4m to $50m in the last 18 months, it’s now focusing on new partnerships and integrations to scale. Zapier now partners up with other fast-growing companies like Airtable, Front, Discord and even Squarespace so it can continue to fuel its growth.

Foster says it’s important for Zapier to have coverage across different apps that its customers are using at work.

“As new apps are launched, and as new products from existing companies are launched, we really focus on just trying to have ubiquity because when we support the things that people use, then Zapier becomes useful for them,” he says.

Because the company has raised a tiny sum of overall funding when you look at the annual revenue they’re pulling, they are now sitting firmly in a SaaS sweet spot. 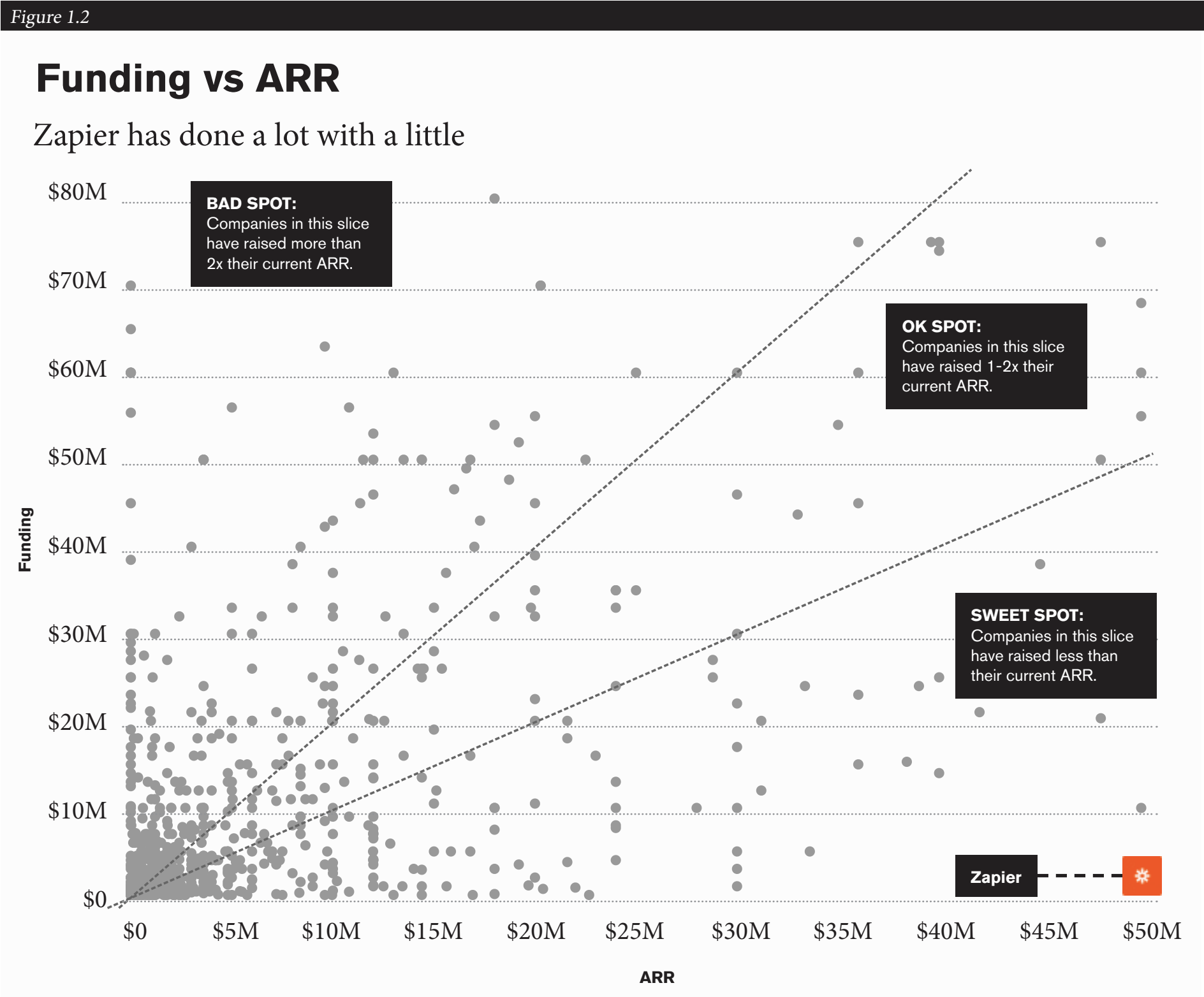 Foster says despite having minimal funding, the company still finds a lot of value from its investors, even as it continues to scale at speed.

“While I think there’s a lot of bad actors in venture, I do think there are some very good folks out there as well that can truly live up to that value-add pitch that you hear so often,” he says.

No office? No problem.

Zapier’s now 200 strong-team is still 100% remote. Apart from saving on office space costs, Zapier has found another benefit of having a 100% remote team: access to a global talent pool.

“You can hire anywhere, and your retention rates, especially if you invest in your culture, your values, and the type of company you are… the retention rates are really high,” Foster says.

And it definitely seems Zapier has a big role in boosting remote work around the globe, too. The 2019 Mary Meeker report around internet trends found Zapier helped boost online collaboration tools across the board.

Not to mention the overall rise in remote work—the report found that 5% of Americans now work remotely, up from 3% in 2000. As Foster told Hacker Noon: Remote workers are happiest when they feel connected to the business.

“The tradeoff of having a distributed team is that you have to be disciplined at documenting decisions and major changes, so no one gets left behind,” he said.

“When people have accurate, well-documented information in front of them, they can make smart decisions, and they can be self-starters.”

Our prediction? Zapier is definitely sitting in the sweetest of spots in terms of minimal funding and its fast-growing customer base.

But the main reason we believe Zapier will continue to double its YoY growth is the growing necessity of API automation in the B2B sector. With the Cloud Workflow Market expected to be worth $3.85 Billion by 2023, if Zapier can continue to build on the number of integrations it offers, there’s no reason they shouldn’t be able to double their ARR to at least $100m in 2020.

As of January 2019, Zapier has an annual recurring revenue (ARR) of $50 million.