by Kimberlee
in Uncategorized
8 min read
0

D.A. Davidson is an 84 year-old financial services firm that has made its mark as a leading advisor to technology companies. The firm advises technology companies and their shareholders on their most important transactions including raising capital, going through an M&A event or going public.

Nathan sat down with Grady McConnell, a Partner in D.A. Davidson’s Technology Investment Banking Group, to talk about what the firm is seeing in the marketplace. They discussed trends in top-line valuation multiples and the state of SaaS in today’s volatile market.

What does D.A. Davidson do?

Founded in Montana in 1935, D.A. Davidson Companies is a financial services firm offering advice to individuals, corporations, institutions and municipalities around America. The firm has now expanded and has regional headquarters in Great Falls, Denver, Los Angeles, Portland and Seattle. It also employs approximately 1,400 associates. 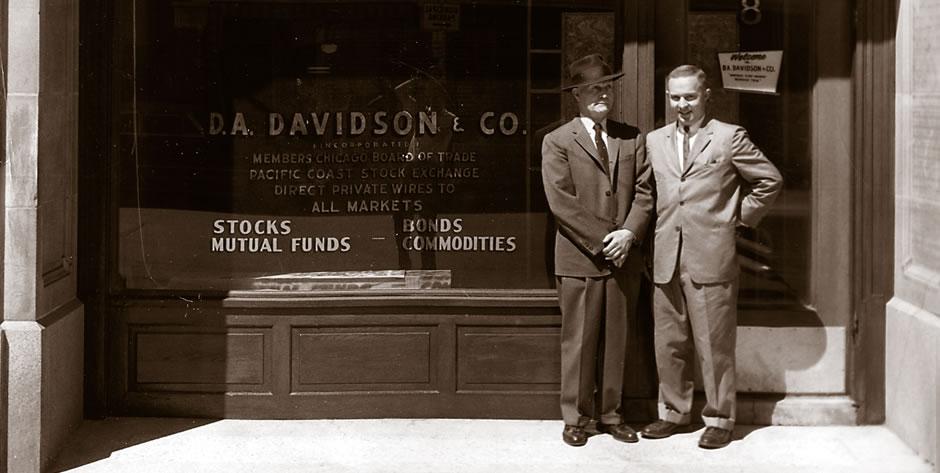 The company is the largest full-service investment firm in the Northwest. It has most recently handled multi-million dollar deals for SaaS companies including Mobile Solutions, Building Systems Design and Planet DDS.

The firm itself in hyper-growth mode

It’s not just the companies D.A. Davidson represents that are in hyper-growth mode. The firm’s technology practice has experienced significant growth over the past 11 months, and they’ve hired five senior bankers since October 2018.

The team has successfully completed 21 transactions since June 2017, worth a total of $2.5b. McConnell says $1b of those transactions have taken place over the past 12 months.

What top-line valuation multiples is the firm seeing?

McConnell believes in the world of enterprise software, most buyers / investors have internalized 5x recurring revenue as a starting point for a company doing ~$10 million of ARR and having “middle of the road” SaaS metrics.

“If you’re a hyper-growth company and you’re significantly above that $10m ARR and your Net Revenue Retention is just off the charts, that’s when you’re going to start seeing it scale upwards and we’ll see 7,8,9,10, even 12x (valuation multiples) in the marketplace,” he says.

“On the other side of the coin, if you’re churn rate is significantly above your peer group and you’re not growing that quickly, then 3-4x (valuation multiple) will be more likely.” 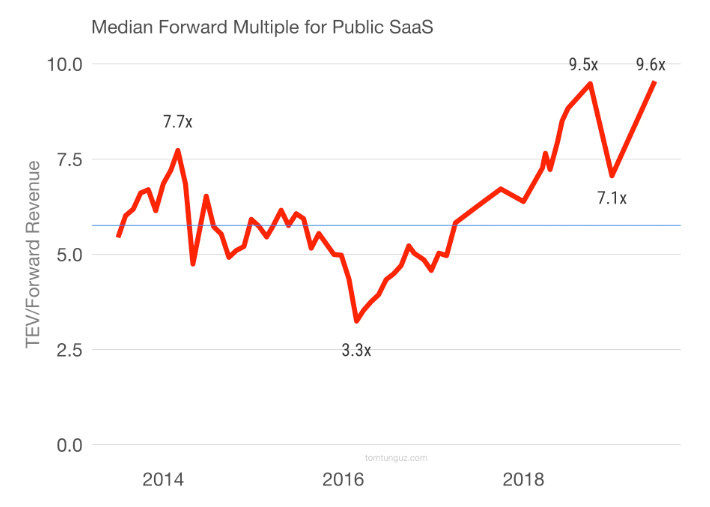 “It means they can raise capital at lower and lower costs, and smaller and smaller dilution. But they do raise questions about whether we will see reversion to the mean in the near future.”

But just what equates to “off the charts Net Revenue Retention”?

It depends on whether a company is targeting Enterprise or SMB customers.

Most firms stay away from businesses burning cash

McConnell was asked, in a hypothetical scenario, which company would earn a better multiple in today’s market.

McConnell said on a high-level, it would be Company B.

“But, the buyer universe would be smaller,” he says.

“If we were to be advising Company A, we would have pretty much every single middle market SaaS investor interested in taking a look and getting extremely aggressive on valuation.”

McConnell says there are some firms out there that simply can’t get comfortable investing in businesses that are burning cash. They just say “no thank you”, as they’re focusing more on positive cash-flow.

And the outcome for Company B?

“It would just be a smaller universe, the beta would be higher, but the ultimate outcome for that business growing 100% would likely be higher than the one growing 50%.”

SMB-serving SaaS companies have a harder time with investors

It’s not uncommon for an enterprise-serving SaaS company to have customers who spend $100k a year on their product.

When it comes to SMB-serving SaaS companies, the customers are worth much less, and often, churn rates are higher.

“The underlying valuations for SaaS businesses is under this assertion that at some point, some- time down the road, if you decided to turn off the sales and marketing spend that they will be massive cash generators,” McConnell says.

“If you have customers who are paying you between $100k-$1m a year, in the case of some of these Enterprise SaaS companies, you can turn off that customer acquisition spend and you will drop significant money to the bottom line and your existing customers would stick around for quite a while.”

On the SMB side, it’s tough to say the same.

“It’s tough for some to get their head around that because it is that constant flywheel of having to continually go out and find new customers.”

“The end game in SaaS is how efficiently you can acquire and keep customers. Intuitively, it’s much easier to do on the Enterprise side than the SMB side.”

Companies like BambooHR, Hubspot have triumphed in the SMB space

It’s not all doom and gloom for SMB-serving SaaS companies.

McConnell says one of his favorite deals he has ever worked on was with BambooHR. The Company investors include ICONIQ Capital and Sorenson Capital, and they serve SMBs in more than 100 countries.

To date, BambooHR has had two venture rounds and has companies like Asana, Foursquare, and SoundCloud as customers.

“That’s a spectacular business, with SaaS metrics through the roof,” McConnell says.

“There are scores of great SMB-focused SaaS companies out there today.  But all things being equal, an enterprise SaaS business will likely receive a premium valuation.”

SaaStr Founder Jason Lemkin says unless an SMB-serving SaaS’s customers are happy and become the company’s vocal champions, it can be tough.

“SMBs churn at a much, much higher rate. You are forced into a very narrow customer acquisition cost band,” he says.

“In the end, most SaaS startups go upmarket, but when you can get it to work—it’s magic.”

“SMBs are the biggest segment of all, and many of the best software companies of all time were built selling to them.”

SaaS companies are “tariff-proof” and can survive a downturn

And if it collapses, McConnell says it’s traditionally safer to be in the Enterprise-serving side of SaaS opposed to SMB.

“I think a lot of people would say that Enterprise SaaS businesses would hold up better in a recession or a downturn of sorts,” McConnell says.

“This is kind of the time that a lot of these enterprise software companies should be looking to go public, if they have their financials in order,” Jaluria says.

In fact, D.A. Davison analyzed stock performances after the 2008 financial crisis. It found SaaS companies like Salesforce and NetSuite all handled the crash significantly better than other tech stocks.

“Every single company is going through a digital transformation right now, and becoming a software company. In my mind that backdrop of a really healthy software spending environment helps all these companies grow.”

The SaaS market is expected to grow at a compound annual growth rate (CAGR) of 15.59% between 2018-2023. And love him or hate him, Donald Trump and his presidential policies have been favorable for the SaaS industry.

Seeking Alpha tracked 10 small SaaS companies with a combined value of <$10B at the beginning of the year. By the time June rolled around, the companies had collectively delivered returns of +50%. This was almost triple the returns of the S&P 500 over the same time period. 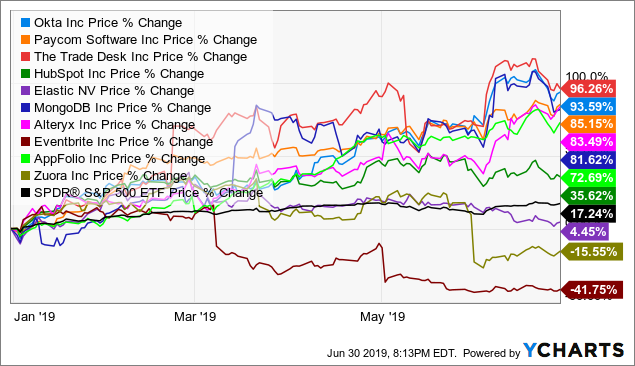 “No matter your political views, you can’t deny that over the last three years since he (Trump) has been elected, the markets have performed extremely well.  You can certainly debate if he was truly a driving factor but stocks across the board have been on a tear,” McConnell says.

And while Trump cut corporate tax from 35% to 21%, over 130 countries and territories met earlier this year and developed a roadmap for overhauling international tax rules. And a big part of that plan is to push a tax on big tech on digital services. If companies are able to find a way to book profits in low tax or offshore havens, countries could then apply a global minimum tax rate to be agreed under the second track.

And while the tax talk is all centered around big tech, they’re often the exact companies who are able to survive an economic downturn.