Kyle Porter is the CEO of SalesLoft today but started back when was a kid selling baseball cards and beenies back in the day.

Today, he describes SalesLoft as “the communications layer that sits on top of your CRM and includes all the tools you need like phone systems, email systems, and sales systems.”

Today, the company is doing $50m in revenue with more than 2,000 customers. To understand the backstory behind Salesloft, I sat down with Kyle to dive into the early years.

In 2011, Kyle and his early team started experimenting with different products to help sales people.

These tools included a data product that helped sales people build a list of targets, a twitter stream like news feed so you could see important updates from prospects you were trying to close, and JobChangeAlerts which told you when one of your CRM prospects changed jobs.

All 3 of these tools generated leads and helped the early Salesloft team gel together.

Ultimately, in 2014 they killed these old products and launched what Salesloft is today. Kyle closed the first $150k in revenue before recruiting his first sales rep from his friends company, David Cummings at Pardot.

What Quota Did You First Sales Person Have?

Initial quota was $48k in new ARR each month. Anthony beat that and quota was edited up moving forward.

How Is your Sales Team Structured Today?

Salesloft has 2 sales teams. One focuses on enterprise and the other they call “commercial” which includes mid market and SMB’s.

The commercial team and enterprise team are run by separate VP’s who both roll up to the CRO. On both teams, solutions engineers, SDR’s, and other inside sales ops work to close deals.

Expansion revenue comes from different upsell motions in the enterprise versus mid market and SMB.

In the enterprise, Salesloft upsells into new teams and divisions. In commercial, the company drives expansion by upselling into new roles where starting pricing may be for a team of SDR’s which quickly expands to demand gen team and field reps.

Porters says, “Salesloft is the only system that is a full suite for sales engagement. We are not just a phone, email cadence, or calendar tool, but we also build in coaching tools to help sales people get smarter.”

What Are You Spending To Get new Customers Today?

Salesloft has a 13 to 14 month payback period right now meaning on a new customer who pays $15k in year one, they’ll spend about $17k on customer acquisition cost (CAC).

Salesloft is serving all company sizes from SMB’s at $15k annual contracts to $1m enterprise deals.

Most of this CAC is tied to headcount and marketing. Lets take a look at that split.

How Many Employees Work At Salesloft Today?

There are 400 people on the Salesloft team today. Being in Atlanta gives Porter an advantage, he says, with just 12% employee turnover year over year, “lowest in our industry”, he says.

The company is not in acquisition talks right now but acquired NoteNinja last year to compete with Chorus and Gong.

NoteNinja was bootstrapped and the 2 founders are now part of the Salesloft team.

Why Did Salesloft Let SalesHacker Sell to Competitor?

Salesloft spent money advertising in SalesHacker so it surprised me when I read that Salesloft competitor Outreach.io acquired Saleshacker.

If you believe that distribution is critical, you’d try and lock down any valuable channels. Porter says Saleshacker didnt’ deliver any special ROI so it wasn’t a big deal to miss out on the deal.

Salesloft’s own conference broke 1400 attendees last year. Conferences can be expensive. How much is Salesloft burning per month to drive growth?

Kyle really respects Eric Yuan at Zoom, siting his arbitrage on tech talent hiring most of his engineers from China.

Porter learns from Zoom via a common investor in Emergence Capital.

Their E40 Metric (rule of 40) in Fig 1.1 comes in around E60 meaning their burn relative to their growth is healthy but not world class. 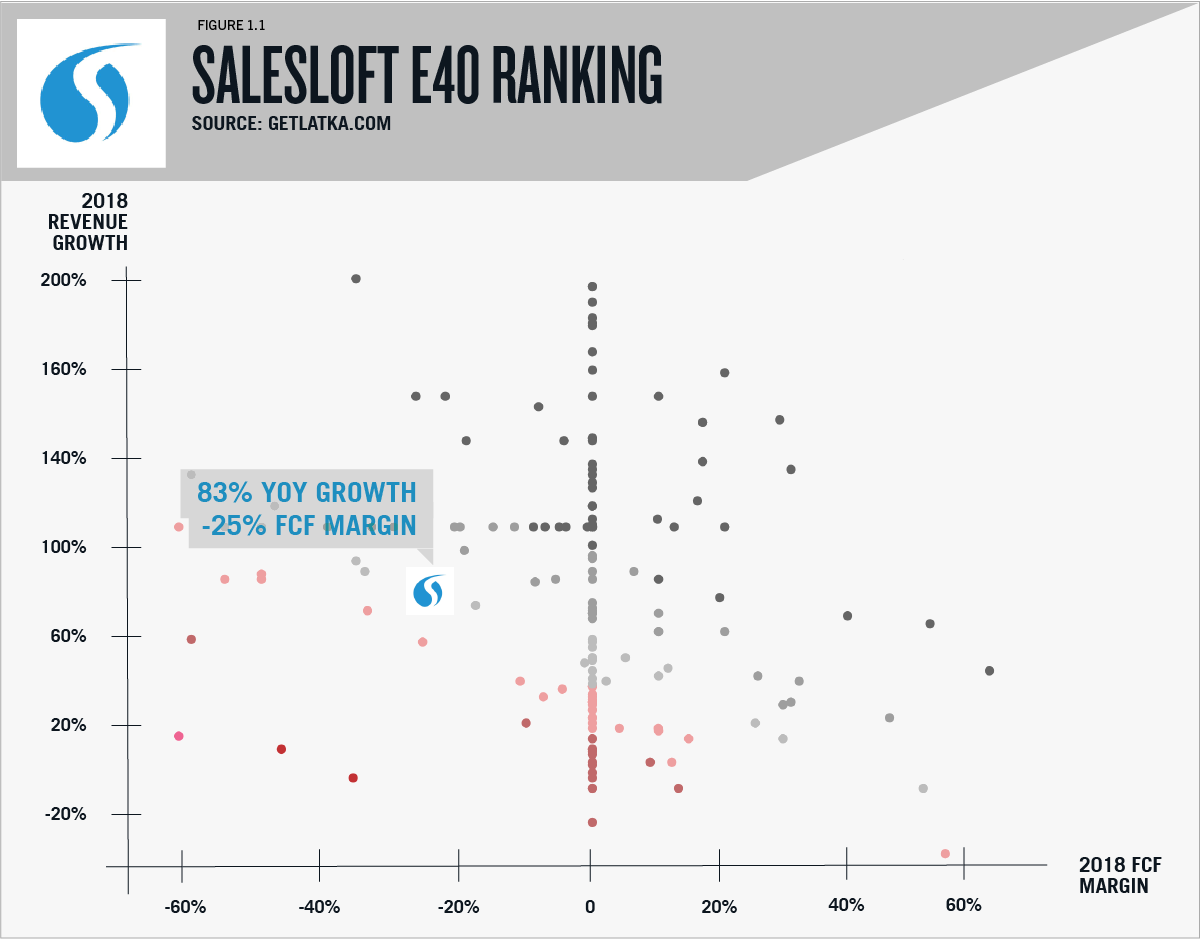 All financial projections show possibility that $140m is the last round of funding before hitting $130m in ARR and being “IPO ready”.

“Sales is a blend between two things. Prospects want 1 on 1 conversations but as company you need a system that you can predict and forecast with. You either end up shooting spam out of a cannon, or sales teams go way to deep, a rifle shot, and can’t repeat it,” says Porter.