Reading the chart below, you might conclude that you can’t build a $100m software company with your average customer paying between $500-$5,000.

We’ll call this the “dead zone”.

The twitter debate motivated me to pull more queries from my SaaS metrics database and to spend some more time thinking about these patterns.

Me: Charge more than $5000 per year or less than $500 to drastically increase likelihood you build a $100m company.#saas #pricing #software pic.twitter.com/V9a0fTStqg

Most of the discussion was around how pricing changes as a company matures.

In this report, I’ll focus on 6 specific questions:

At the end of the article you’ll be able to have a better debate with your team about what your pricing should be.

Twitter user @oTomCameron did a nice job articulating this point so I’ll summarize:

Outbound sales rep based, hands on is economically viable when customer paying enough to cover the costs, hence a price point cut off of $5000/year.

Automated inbound web-based model that requires no sales staff only works for prices under $500/year because businesses won’t pay more without human touch.

To put real color behind this, here are actual SaaS companies and their ACV vs. customer count distributions, pulled from my SaaStock keynote (Full slides here): 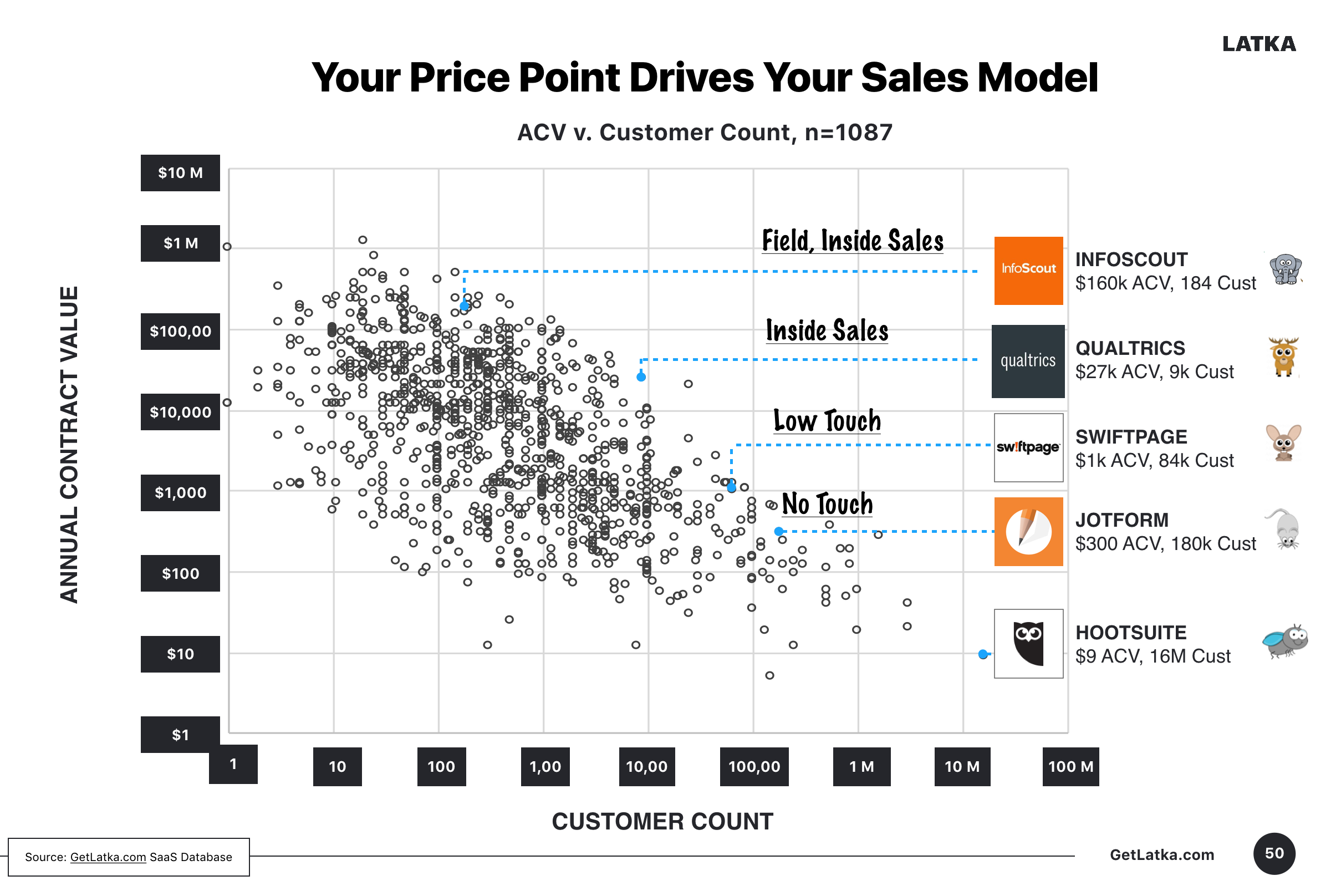 … But Nathan, it’s easy to move around this graph. Start charging a little and upsell as time goes on.

2. Is It Reasonable To Rely On Freemium Today for Enterprise Tomorrow?

Peter Caputa, @pc4media on twitter, argued that more companies will fall into the $500-$5k average ACV “dead range” over next few years as people get more accustomed to starting free and upgrading to higher cost price plans.

Lets take a look at a few companies that relied on Freemium over past few years who are now trying to upsell and move enterprise.

None of these guys have been able to move the average amount customers pay per year above $500:

Pay attention to “Data as of” column. The only data source I’m using on all this data is my personal interview with the CEO for my podcast The Top Entrepreneurs.

Several of these companies have harvested a cohort of their customers into $100k+ ACV accounts.

Companies like Zoom have obviously released more updated data via their S1 which sheds more light on this topic.

According to Zoom’s S1 filing: “Zoom had 344 customers that generated more than $100k in annual revenue. 30% of their total revenue in FY ’19 came from those customers. 55% of those 344 customers started with at least one free host prior to subscribing.”

Eric and his team did a great job understanding what to give away for free that would most drastically increase likelihood that expansion revenue would occur.

According to their current pricing page, that freemium offer is unlimited 1:1 meetings lasting no more than 40 minutes. Once you hit one of those walls, you upgrade to $15/mo/host.

Zoom did a great job building multiple pricing axis into their payment structure to drive upgrades:

If you want more details on how Eric developed this model, he goes in depth here:

Most companies only upsell using 1 usage driven metric, a seat based metric, and feature based upselling. Zoom has created multiple incentives in each of these categories to drive net revenue retention north of 140%.

Freshworks has done a nice job here as well.

Loom: A Company About To Turn on First Paywall After Freemium Growth

The flip side of this argument is a company like Loom. As of February 2019, the company had 200k MAU, burning $100k/mo in cash, and continued to focus on free user acquisition with plans to launch their first paid tier.

They are betting that # of recorded videos stored (usage based upsell) and a few feature based upsells will take them to the $100m promise land. They’ve raised $14m so they’ve got pressure to drive venture like returns.

I asked Shahed, one of Loom’s founders, how many of his free users he expects to convert to paid when they introduce their $10/mo paywall (minute 6:11)

We’ll see where the Loom story ends up.

As you can see from the 10 companies in the table above, it’s very difficult to move your entire business from a freemium model with sub $500 ACV’s to an enterprise model with $5000+ ACV’s on average.

But Nathan, “Hootsuite, Malwarebytes, and Xactly seem to contradict this model – They all have sales motions,” said twitter user @conradwa.

Based off my interviews with Marcin at Malwarebytes, Chris at Xactly, and Ryan at Hootsuite they actually are all outside of the $500-$5k ACV deadzone.

Note that averages are dangerous because they cover useful trends and insights but are also valuable for recognizing macro patterns.

All of these companies certainly have customers paying ACV’s in this “dead zone”. What’d I’d argue is that companies paying dead zone amounts of these 3 SaaS solutions are not stationary in the dead zone. They are either aggressively moving north of it, or going back south of it.

For Hootsuite, that may sound like: “Hey Fortune 100 company who wants lots of custom stuff, we know you want X, Y, and Z features, but we don’t plan to build those enterprise tools. Enjoy our lower price point, or go give enterprise Social Marketing company Sprinklr a try”.

4. Is It Easier to Sell to Whales or Flies?

So, you’re convinced you can’t do both and your worried you’re going to pick the wrong customer profile to go after.

Should you develop your tech a bit more so you can go after whales, or launch on product hunt and start going after flies?

I actually don’t have great data on this because defining “easy” is tricky.

What I can share is that of the 1000+ CEO’s I’ve interviewed, the ones doing more than $10m in ARR have this distribution.

The one thing you should keep in mind is that your target price point will end up driving your sales functions like we discussed at the top of this article.

Nathan, I still cant’ decide on whales or flies. Can I do both?

Of course you can but each of these sales motions are very different.

$100k contracts would employ a sales function that relies on development reps getting qualified leads for account executives which close and then pass off to customer success reps.

$100 contracts would be no touch driven and involve conversations around no touch website conversion rates, usage metrics to drive no touch upsells, and strategies to reduce churn.

I’d argue hard for focusing on one.

6. If We Outsource SMB Sales to India Can We Afford to Put Touch on a $500/year Plan?

The math changes a bit when you’re running most of your SMB/Mid Market sales teams out off a lower cost country like India. That’s what we’re doing @CrmRecruit

I’m not super familiar with an India based sales team in terms of expected base salaries for sales people, commissions, and general overhead.

That being said, a US based enterprise looking to spend $1k/year on your solution is going to want to talk to someone.

Assuming a gross margin of 80%, that leaves you with $800 bucks to play with across your paid spend, sales person commission, and other business expenses.

If you can make the math work, then great, maybe you can outsource your sales function and get to $100m in ARR while still keeping costs in check.

I’d love for you to comment if you’ve figured out a cost effective way to sell $500-$5k high touch contracts (whether its an outsourced sales team or some other mousetrap you invented).

7. How Most Companies Change Pricing Over Time

Most companies follow 2 paths as they mature their pricing plans.

We have too many customers who simply aren’t paying enough. Our support costs are through the roof. We either have to stop giving support to customers who pay so little, or we need to 3x our price point.

This means logo churn will increase as we shed lower paying customers, but revenue churn should stay manageable in the sub 3% per month range.

Logo churn spiking is a leading indicator of this sort of strategy. Mapping it on a graph looks like this: 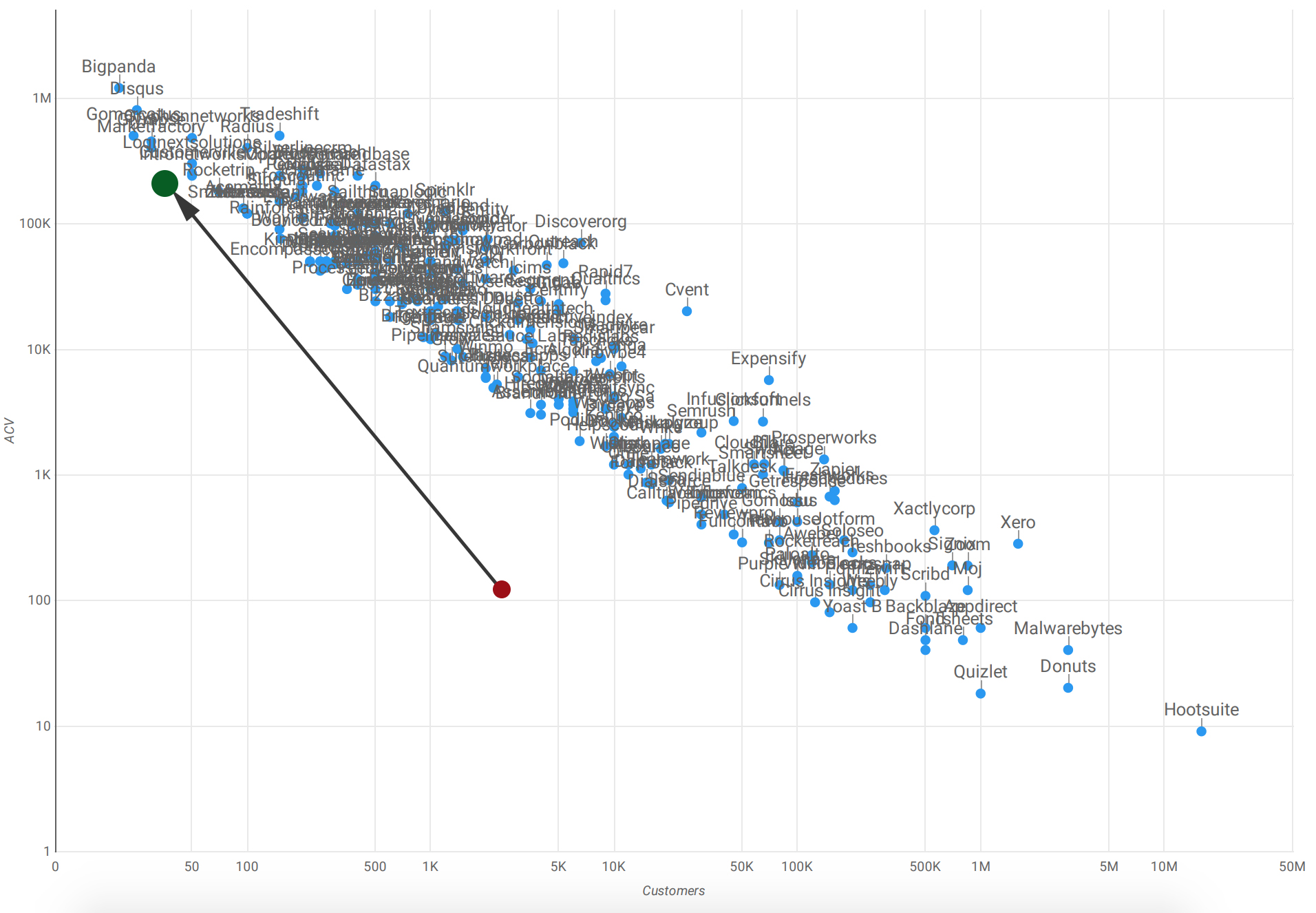 We only have 10 customers paying $10k per year and can’t seem to find new channels to get more customers willing to pay this price for our software. We need to decrease our price point to open up top of funnel, move downmarket, and sell more customers at a lower cost price point.

Revenue churn will spike as higher paying customers ask to be moved to your now cheaper pricing, but logo churn should stage manageable in the sub 3% per month range.

Revenue churn spiking is a leading indicator of this sort of strategy. Mapping it on a graph looks like this: 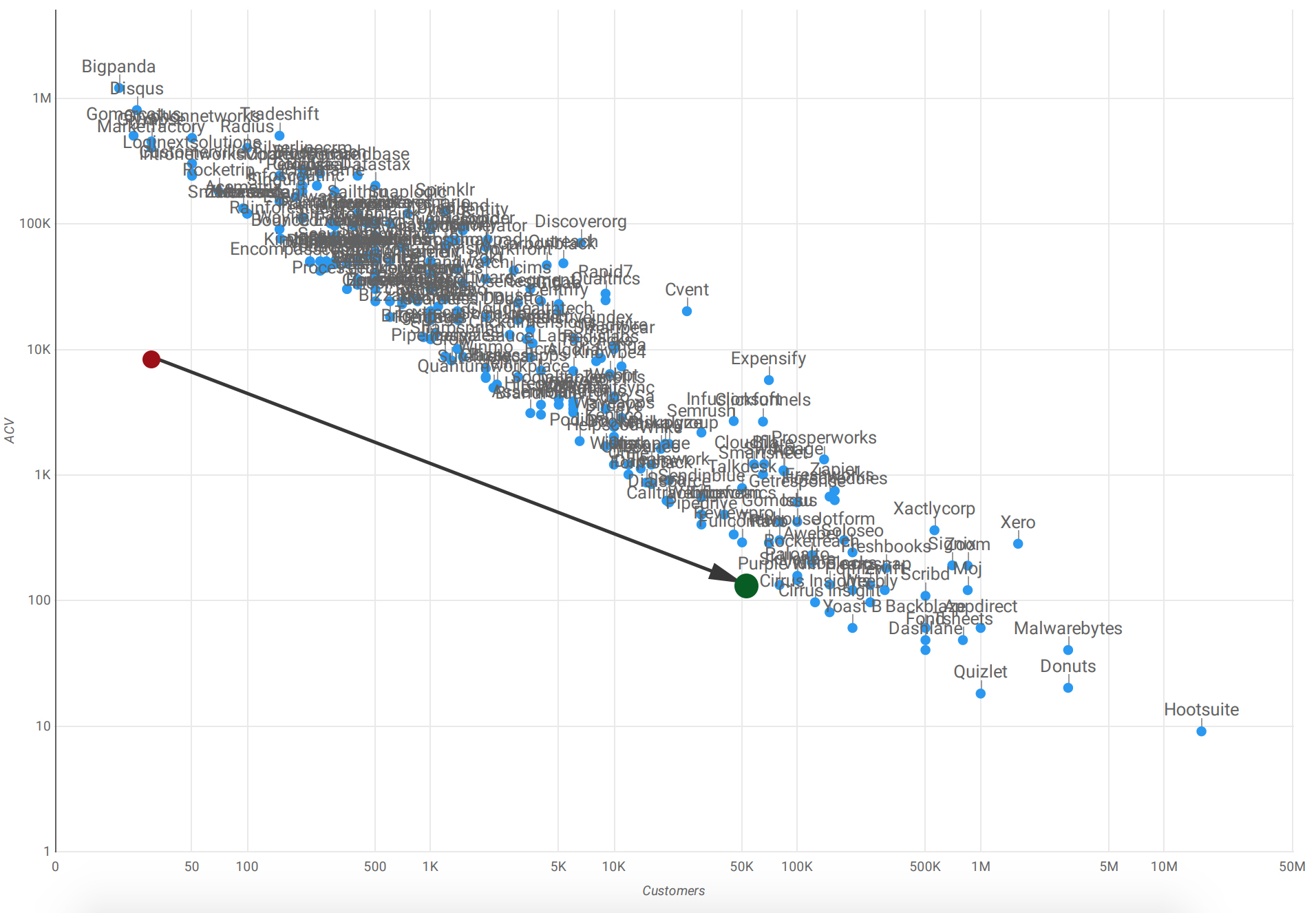 I painted most of this argument as black or white for the sake of clarity. We all know its not black or white. Use this as a guide to generate healthy debate internally at your company around price point.

I’ll end by saying I believe price point won’t always “make” you but it can definitely break you.

Avoid breaking by asking yourself this pricing question right now:

Renewal Rate Guide: What It Is And What It Means For Your Company (+63 Examples)