If you’re an ecommerce brand spending money on traffic, every dollar matters. You may experience a week where ad dollars don’t drive as high return on ad spend (ROAS) and wonder why.

Today, bad actors target supply side platforms (SSPs) which sell ad inventory and could be the reason you see a dip in your metrics.

I sat down with Co-Founder and CEO Guy Tytunovich to discuss customer count, CAC, Payback periods, net revenue retention, sales person profitability, and more as they look to add their next $24m in ARR bookings.

Late 2015 Tytunovich decided to launch Cheq with his cofounder Ehud Levy who put in the initial capital. 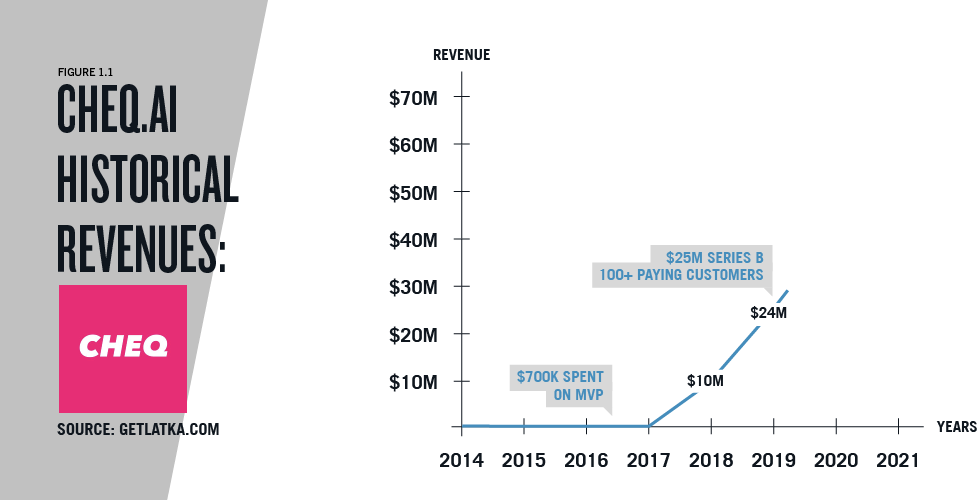 Tytunovich says that most of these customers are demand side agencies and advertisers. The second level of customers come from platform players and then the publishers.

“Today we’re past $2m/mo in MRR,” says Tytunovich. The math makes sense. Cheq customer count has passed 100 and at ACV’s of $250k, you get monthly recurring revenue in the $2m/mo range.

“We just finished raising our B round, we haven’t announced it yet,” he continued.

“It was a $25m round including Battery ventures.”

How Much Runway Do You Have?

Cheq is planning for 3 years of runway which means burn could get up to $700k/mo if they go raise a significant Series B. “Thats my number Nathan, $700k. Impressive you got that so fast,” said Tytunovich.

Anytime a CEO has a 1:1 Revenue:Funding ratio, thats a pretty good sign. Way too many companies today raising too much where there revenue is something like 1/10th of the total funding raised.

Monday is in this position with the $150m they just raised. If Roy and team can’t deploy that to drive significant growth, you’ll see their $1.9B valuation tumble.

Cheq is driving healthy, intentional, and profitable growth. How are they doing it?

3 Year Contracts Are The Secret

Net revenue retention is close to 130% because the company signs 3 year contracts with new customers.

The contracts include a base fee plus a variable component that increases as the customer manages more traffic. Because of this, customers expand automatically as their traffic increases.

The company doesn’t have seat based upsell pricing or even feature based upselling. Most of it is traffic based. Accounts are expanding by about 30% yoy. Considering they’re only using one pricing axis to upsell 130% net revenue retention is impressive.

Expect them to break 140% as they release new value based pricing axis around feature sets and seats. They’ll likely use the same strategies that CEO’s like Chris at $200m revenue Xactly are using to push up Net Revenue Retention.

How Much Cheq Pays To Get a New Customer (CAC)

“We optimize for getting a return on a customer in the first 9 months,” says Tytunovich. Right now the company is at a 4-7 month payback period across new customers.

Does The Average Customer Pay $250k/yr?

“The large platforms that aggregate a lot of traffic would pay more than $1.5m per year.”

To grow these enterprise accounts, you need a strong enterprise sales team if you want to build a $100m revenue company. What does Cheq’s sales process look like?

How Many Engineers and Sales People Are On Cheq Team?

In total, 100 people work at Cheq today. 70 are engineers based in Tel Aviv, Israel, 15 are quota carrying reps, and the rest are general administrative roles.

In the first year Cheq expects a junior sales person to land $500k in new ARR bookings as a quota target. In year two this quota target rises to $1m. After year 2, quota target stays the same but bonus structure gets better as sales reps earn tenure.

Salesperson total comp is about 50/50 split between base and commission. If a sales person hits quota, their total compensation is usually 1/5th of the total new annual revenue they closed.

This means for a sales person who hits quota and makes $200k, quota target would be $1m in new ARR bookings per year for 5x salesperson profitability.

So how big can this thing grow? Is ad quality really a big issue?

Why Can’t We Trust Impression Data?

“Google and Facebook are reliable,” says Tytunovich, “but there is real cybersecurity issue around ad fraud” he continued.

One of their clients is an SSP supply side platform. They monetize traffic for publishers. In 2018, Cheq.ai discovered a fraud case targeting this SSP.

100 site owners were collaborating specifically to defraud the SSP driving it fake clicks. Over $2m in wasted revenue was saved per month across billions of clicks thanks to Cheq.

As Amazon gets into the ad game and the legacy players like Facebook and Google continue to innovate on their ad products, more bad actors will continue to target the ad tech ecosystems in search of free money.

If Cheq has its way, they’ll stop this fraud and “In the process you’ll build a $2b business,” I said.

Tytunovich quickly responded, “Why so small?”

Should SlideBean Switch to a Freemium Model?